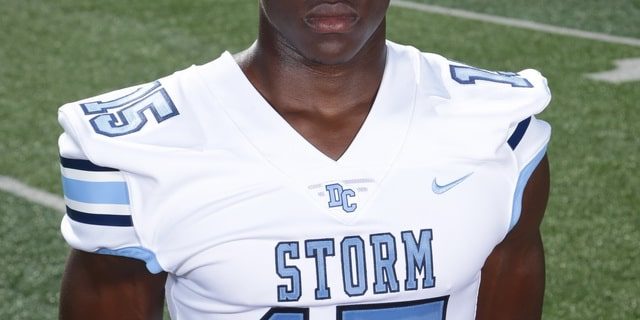 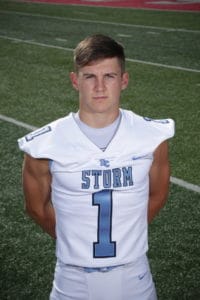 The Delta Charter Storm may not have had the best season in terms of wins and losses as the team only won two games in the 2018 season, but facing a difficult schedule and a lot of adversity to go along with it proved to be a successful season for the program. Delta Charter Head Coach Blake Wheeler believes that it was a great year for the program and that sometimes, it is more than a win loss record that depicts the success of the team.

“It was a pretty difficult season looking back at the schedule that we have had,” Wheeler said. “We played against a lot of quality opponents and playoff teams. Our district has always been one of the toughest in the state, but I was really proud of our kids and the way that we competed. We played a lot of games in which the score didn’t indicate how good we really played. For example, in the Oak Grove game, we had over 500 yards of offense and in the St. Frederick game, we were up 20-10 at halftime against an 8-2 team. We fell short in that one, but we competed really hard. It was just a season in which the younger guys were trying to figure everything out and find their place.”

According to Coach Wheeler, there were two seniors that played a critical role in helping those younger guys find their place in the program.

“We were led by Trey Poole and Freddie Mango Jr.,” Wheeler said. “Both are fantastic kids and I cannot say enough about both those guys. They did a great job for us and kept us fighting in a lot of games that we shouldn’t have been in.”

For Freddie Mango Jr., it has been an interesting season to say the least. At the beginning of the season, Mango was featured on the cover of our North Louisiana preview magazine edition and was nominated on our 2nd Team All-North Louisiana team. At 5-11, 200 pounds, the three time 1st Team All-District running back was also getting a lot of attention from colleges including Tulane, which have originally offered the talented playmaker. It was looking to be the best season yet for a player that was already coming off of a season in which he ran for 1,200 yards and 15 touchdowns. However, things took a downward turn early in the season.

“It was tough for Freddie because he had a hamstring injury in the third game of the season,” Wheeler said. “That is one of those injuries that is tough to deal with, but telling a senior to sit and rest is not easy. He gutted it out and played hard for us.”

Mango is a tough hard nosed player that was not going to let an injury slow him down. He realized that his teammates needed him, but he also knew that they would have his back in return.

“I did get frustrated a little bit because I knew that I got injured,” Mango said. “However, I knew that I had to set a foundation for the younger guys so I decided to suit up and play for the guys that were next to me.”

Overcoming an injury was not the only thing that Mango had to overcome. Once a Tulane commit, Mango de-committed and as a result, set him back to square one in trying to find opportunities to play at the next level.

“I recently de-committed from Tulane because they were taking two safeties and I was one of them,” Mango said. “I wasn’t comfortable playing safety especially going through an injury and translating it to playing college football so they took two other guys. I want to play for a program that I feel comfortable with.”

According to Coach Wheeler, the de-commitment set Mango back, but fortunately, more colleges have shown interest in Mango including Northwestern State, Stephen F. Austin, McNeese State, Northern Colorado, Southeastern Louisiana University, Grambling, and Southern. Thanks to strong performances in recent All-Star games, it looks like Mango is back to pre season form.

Mango’s teammate Trey Poole has always battled obstacles most notably his size at only 5-6, 170 pounds, but to Poole, size only matters when you make it an issue. Poole has also played out of position in high school according to his head coach.

“Trey has been our leader all season long,” Wheeler said. “He is really a slot receiver, but because we needed him at quarterback, he stepped in and led the team. He had a fantastic year for us.”

Poole has done whatever it means necessary for his team and that is what makes him stand apart. His stats say for themselves as the two time All-Metro and All-Parish playmaker did everything it took to keep the Storm in games such as passing for 1,500 yards, running for 600 yards, scoring 20 touchdowns, and making 90 tackles on defense. For Poole, he looked at the season as a positive note no matter what the win total was.

“I felt like we had a pretty good season,” Poole said. “We were young and we were on the other side of a lot of close games this year, but we played together and hard for each other. It was a great season for not only me and Freddie, but for the rest of the team.”

With a 3.5 GPA and a 22 ACT score, he is a great example of a student athlete when it comes to in the classroom and on the football field. With all those factors in mind, Poole overcame those odds to gain interests from colleges as well as receive an offer from Millsaps College. For Poole, Millsaps College is the program that suits him the most.

“Millsaps is a great academic school,” Poole said. “It is also a great small school atmosphere that could benefit me.”

Both players may come from different backgrounds and have gone through a lot of different obstacles, but one thing that they share is the love for Delta Charter as well as the respect for not only each other as players, but as friends.

“Trey is a great leader and encourager,” Mango said. “He is very coachable and is somebody that you want on your team. No matter what the situation is, the team could be 0-10 and he will still be very encouraging and have a positive attitude. He brings a lot of energy to the program and also does the same thing when it comes in the classroom as well.”

“There is so much that I could say about Freddie,” Poole said. “When you have somebody that is about 6-0, 200 pounds on your side, it is just great to have. Another thing about Freddie is that he is never down. It is always good to have a guy like Freddie by your side. Not only on the football field, but off the football field, Freddie can do it all. He is a nice guy and is very coachable too.”

Both players are looking to make their final college decisions sometime in the second signing period, but until then, they will enjoy being with each other until the two friends go their separate ways.

“Any school that is going to get these two guys, they will get themselves a hard worker, a quality young man, and somebody that is really going to help their team,” Wheeler said.

No matter what the future holds for this still young football program, it is the efforts of both Freddie Mango Jr. and Trey Poole that could help set the stage for future Storm players to come.

“I was happy to at least see them have some bright spots in their senior seasons. I know it was not the record they were hoping for, but I hope they have learned a lot during their time because I have learned a lot from those guys,” Wheeler said.