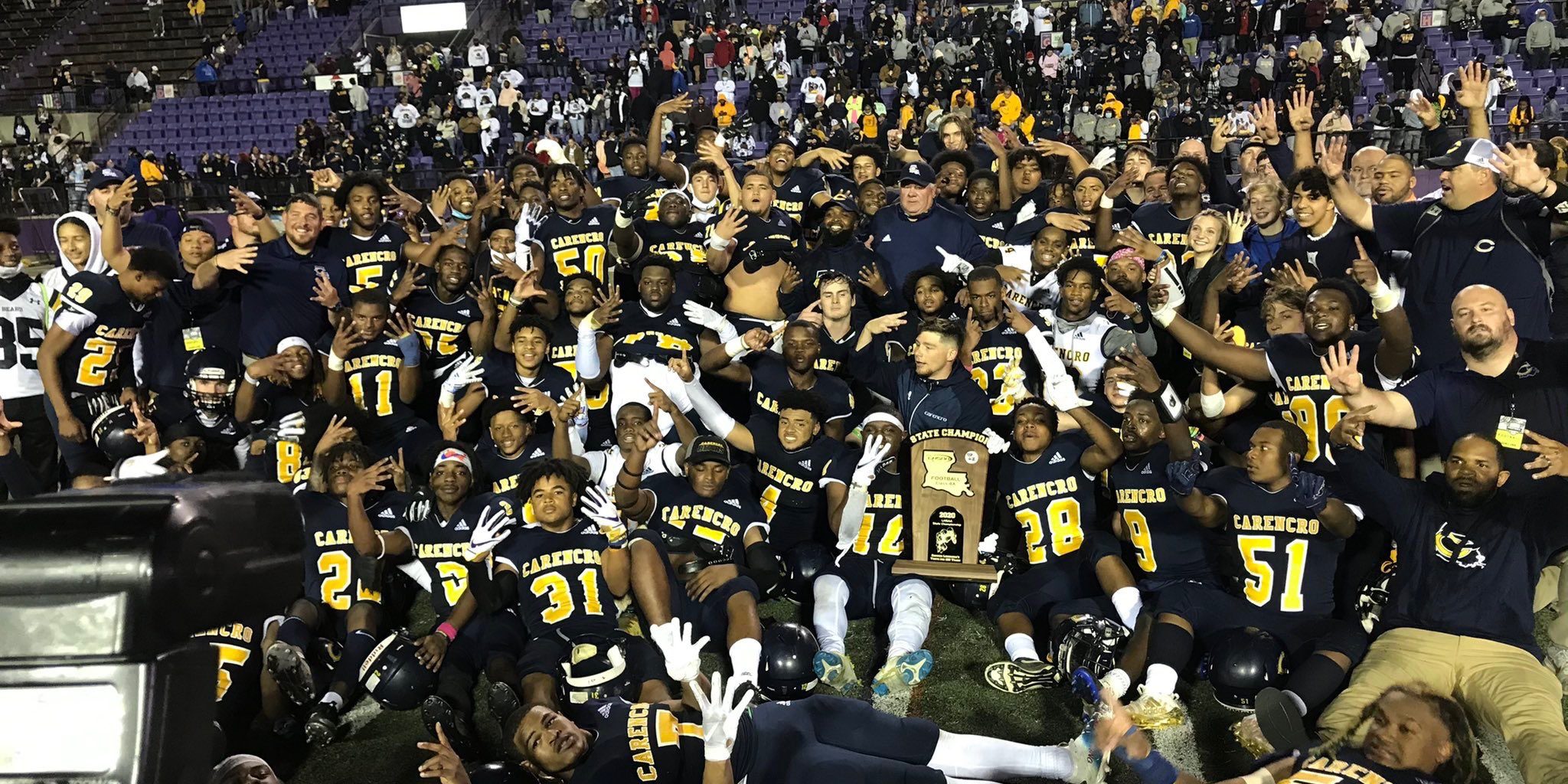 The Carencro Golden Bears entered the season determined for their first state championship since 1992. Although COVID played a negative impactful role in limiting the team’s offseason, it did not slow down a mature and experienced team from reaching its goals after coming up short losing in the Class 4A Quarterfinals to Warren Easton the season prior according to head coach Tony Courville.

“I was blessed with a mature football team,” Coach Courville said. “We had a lot of seniors coming back, and they had a lot of initiative. For the three months that we were not around each other because of COVID, we would send out workouts, and the seniors would film the workouts they did and would send it back to us. It showed me that whenever we were allowed to play that they would be ready.”

Ready they were as the team was looking for a big time season from their experienced group.

“Having Popcorn (Traylon Prejean) back from injury and also having Kendrell Williams returning at running back really made a difference,” Coach Courville said. “Then, this year, our defense did really well in a 4-3 scheme. With nine returning starters from the season before, they really took off. We dominated in most of our games on both sides of the football.”

For the most part, the Golden Bears did win the majority of their games during the regular season starting with a very impressive shutout victory against Class 5A powerhouse West Monroe, but the team did not accomplish one of their goals in winning a district championship with a loss to the St. Thomas More Cougars. Although the team did not win a district championship, their minds were set on a much bigger prize.

Immediately after the loss, the Golden Bears went back to their winning ways and finished the regular season with an 7-1 record.

“When we lost that game, we sat back and reevaluated a lot of things,” Coach Courville said. “We actually made some personnel changes along our offensive line. We took our senior tackle John Miller and put him at center while we put the center at tackle. These kids are resilient and refocused in order to get that championship ring.”

The team saved its best football for last during its dominant playoff run making another statement to the rest of the 4A class with playoff victories over DeRidder, Plaquemine, and Neville by a combined score of 172-28.

“We felt that we had this chance and that we were going to take advantage of that opportunity,” Coach Courville said. “We were not going to let anybody stop us.”

As for extra motivation, former Carencro head football coach Mac Barousse and a lot of members from the 1992 Carencro state championship team came to one of the last practices before the Class 4A state championship game to give the 2020 Golden Bears a piece of advice.

“I invited Coach Barousse to talk to the team, and there also had to be at least 50 guys from previous teams that came and watched us practice,” Coach Courville said. “I asked them to introduce themselves to the team, say their name as well as what years they have been a part of the team, and what position they played. In our hall, we have all the All-State and All-Americans that have been here at Carencro so it was good for the kids to match a name to a picture. It was cool, and they stayed the whole practice. It was like a reunion for them as they were telling stories and were telling our guys that they were about to make history, but it was up to our guys to see what side of history they wanted to be on.”

Well, in order to make history and end the 28 year state championship drought, the Golden Bears must stop history from happening as they would face the Edna Karr Cougars, which were going for an incredible five straight state championships in a row.

“It is a remarkable accomplishment what those players and coaches have accomplished in the last couple of years,” Coach Courville said. “When you sit down and study how they do things over there, it is amazing what they do in Algiers. Some of the things they do, we respond to do it that way too. Last year, when I went to the Dome, I took a picture of the two teams’ logos in the 4A state championship, which are Edna Karr and Warren Easton. I blew the picture up and put it in the kids’ lockers as extra motivation. To get to where we wanted to go, we had to go past the likes of Edna Karr, Warren Easton, Neville, and Lakeshore.”

The Golden Bears were finally there at the state championship, but they were just not excited to be there. They went head to toe with the most dominant Class 4A program in Edna Karr and came out on top ending their quest for a fifth straight state championship. The dynamic running back duo of Prejean and Williams combined for 254 yards on the ground while both lines of scrimmage dominated the game limiting the Cougars’ explosive offense to only 15 minutes of possession. The final score ended up being 35-19 as the Golden Bears went on to win their second state championship.

“I got a tremendous hard working staff, and they got those guys prepared week in and week out,” Coach Courville said. “When you have that combination, good things will happen.”

“When your best players are high character players, they also lead the team by example on and off the field, that is what we had,” Coach Courville said. “Those guys held each other accountable, and they understood that they needed to sacrifice in going out and doing what a lot of high school kids usually do in order to avoid COVID. The kids believed and di what it took to win a state championship.”

The sacrifices the team made paid off as ending a state championship drought was gratifying not only for the football program itself, but it was also a shining light for the school community during a dark time.

“When we were leaving to go to Natchitoches for the state championship, the fans gave us a going away parade,” Coach Courville said. “The kids were all excited, but I told them how big it is going to be after we win. Each week, you were worried about just winning the game and taking one game at a time, but you forget the people that hug you, shake your hand, and tell you Coach, thank you for giving us something positive for us to look forward to on Friday nights. I get emotional talking about it, but we are doing this more than ourselves, but for our community.”

The 2020 Carencro Golden Bears will not be remembered for ending a state championship drought or ending Edna Karr’s quest for a five peat, but what they will be remembered the most for is their relentless pursuit of commitment to not only winning, but also giving back to the people that have invested in them the most.