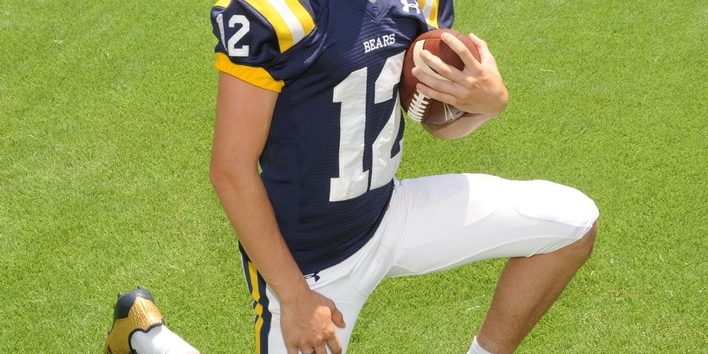 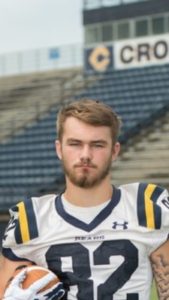 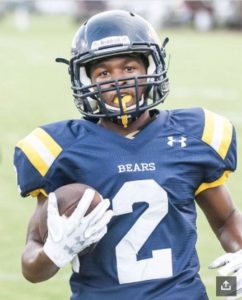 The Carencro High School Golden Bears have always been a proud football program full of rich tradition. In fact, there are plenty of second and third generation players that are carrying on that tradition today. For example, Carencro senior tight end/long snapper Blake Lacombe’s father was part of the 1992 Carencro state championship football team, which featured former LSU great and New England Patriot Kevin Faulk.

“My dad always told me they always came together and worked for everything they earned,” Lacombe said. “He told me he has never seen someone as good as Kevin was in high school.”

The Bears are trying to get back to their winning ways under Head Coach Tony Courville. So far at the start of the season, wins have been a tough go after starting 1-4 in the team’s first five games, but having the support of former assistant coaches like Kevin Faulk, who is now the Director of Player Development at LSU as well as the support of the community and family members, gives the team confidence especially senior running back Artrell Marks, who has really soaked it all in.

“Coach Faulk has always told us to visualize the game in your head before it’s played and then watch the outcome,” Marks said.

Marks along with running backs Trejun Jones and Theonte Allen are not big running backs, but they all are playmakers with the ball in their hands and are capable of making big things happen.

“It’s good teaming up with those guys,” Marks said. “I personally think that we are the fastest in the state once we get going. It’s hard to stop.”

For that reason alone, the coaching staff has switched the offense to more of a run heavy attack than the previous year. Still, when the team does need to throw the football, they are dangerous with one of the state’s best upcoming senior quarterbacks in Austen Breaux. Louisiana Football Magazine’s recruiting guru Lee Brecheen was really high on Breaux putting him on the 2nd Team All-South Louisiana team.

“Austen Breaux is a good looking young quarterback that got some playing time last season and looked good while doing it,” Brecheen said. “Since now, he has a full year, Breaux can become a late bloomer by the end of the season with strong arm and 4.65/40 speed. He could play for a lot of programs by season’s end.”

Even though the offense has changed, Breaux feels like that he is now more comfortable as a senior at quarterback after splitting time with Chance Prejean last season.

“I am a team player as a quarterback,” Breaux said. “It’s my job to run the offense. Coach Peters mixes it up and I throw the ball when needed. I feel that my passing game has improved as well as my ability to read the defense.”

Breaux will only grow more confident after each game and once he gets his chemistry going with St. Martinville High School senior WR/TE Kyron Comeaux. Heading into the season, Comeaux has already received interests from D-II schools including receiving an offer from Culver Stockton College. The potential is there at the end of the season for Breaux and Comeaux to become a dynamic QB-WR combination, but right now, it is about getting used to the system the Golden Bears like to run. 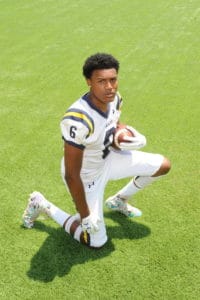 “My biggest transition is moving back to tight end and changing roles,” Comeaux said. “I was used to being a go to wide receiver, but I understand that the Carencro program is different and they needed me at another position in order to help the team. I have no problem with that because I am a team player.”

Mentioned earlier, Blake Lacombe is also a team player. He is not the biggest guy for a tight end as he is only 5-10, 175 pounds, but he plays hard and is versatile in not only playing tight end, but being an effective long snapper.

“I try to be as physical and technically sound as I can in order to win,” Lacombe said.

Defensively, one of the top senior defenders on the team is senior FS/CB Chukwuma Utomi. At 6-4, 163 pounds, Utomi has the ideal frame and size that is ideal for a cornerback in order to track and breakdown on the football. In fact, Utomi has already being looked at by schools such as Navy and West Florida for that reason.

“I feel that I am really good at tracking the football and using my length on 50/50 footballs,” Utomi said. 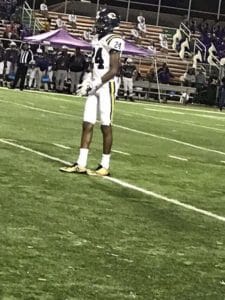 Overall, the team is not as big as other 4A programs throughout the state, but there are a lot of athletic, speedy, and well coached players on this team. Even though the team may have not have the record to show it with a 1-4 showing, these seniors are confident that the wins will follow soon.

“Our record is no indication of who we are,” Breaux said. “I am very proud to be apart of this team. District starts this week and we are loaded with talent. We will accomplish many goals in the next few weeks.”