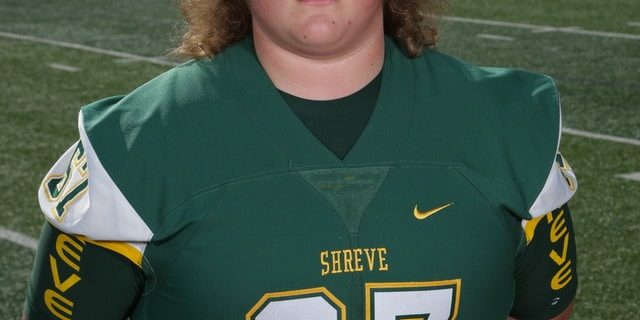 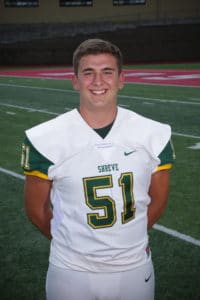 After an up and down season in 2017 finishing with a 4-6 overall record as well as replacing key starters from that particular season including OG Colton Gill (Arkansas Monticello), DE Colyn Givens (Southern), WR Stephon Smith (Mississippi College), punter Alfonso Deleon (Southern), RB James Ivory, LB Micah Latin (Louisiana College), and even quarterback Lucas Grub, there were a lot of people that did not expect the Captain Shreve High School Gators to have the type of breakout season that they have had in 2018. Also, add in the fact that they play in one of the toughest districts in Louisiana that features teams such as Evangel Christian Academy, Haughton High School, C.E. Byrd High School, Airline High School, Parkway High School, and Southwood High School, it just makes it even more incredible. Head Coach Bryant Sepulvado has done an excellent coaching job in his fourth year and does not get the type of recognition that he deserves. Right now, as we speak, the Gators have already won more games than last year. Entering Week 9, the Gators have a 6-2 overall record with their two losses only coming against district rivals C.E. Byrd High School and Haughton High School. Even with the impressive start, the Gators feel like the season could be even better as they lost to both teams by a combined nine points. Captain Shreve senior offensive guard Eric Harper knows that if the team did not turn the ball over as much in their two losses, they would be undefeated at this point of the season.

“If we cut the mistakes, we could be 8-0,” Harper said. “Right now, we are focusing on bettering ourselves and making a deep playoff run.” 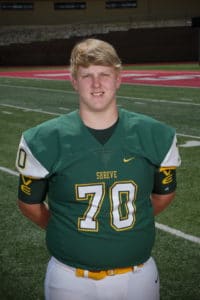 The team is capable of making a deep playoff run because of Harper and the rest of the Gator offensive line. For a team that is replacing some skill position players, the transition makes it a lot easier with the starting five up front. The leader of the group is Harper, who has been a starter on the varsity team over the last three years. Not only is Harper a veteran and a leader, but he has shown his versatility as well playing all three main positions on the offensive line including center, guard, and tackle. Louisiana Football Magazine’s recruiting expert Lee Brecheen likes what he sees in Harper as he put him on the cover of our North Louisiana magazine edition as well as put him on our preseason 2nd team All-North Louisiana team.

“Eric Harper can play center, guard, or even tackle in college,” Brecheen said. “I think he is more suited at offensive guard if he goes DI. He is a late bloomer that still has not hit his full potential yet.”

Right now, Harper is trying to improve his game whether it is working on his upper body strength or his use of hands. Qualities to his game such as his quick feet, explosiveness, and football IQ have generated some college interest.

“Louisiana College and Millsaps College have offered,” Harper said. “There is some interest being shown by ULL and Northwestern State.”

Harper is not the only offensive lineman drawing college interest. Other veterans are senior offensive tackle Cade Davis (6-3, 250) and senior offensive guard Dalton Clark (6-3, 285). Also, there is a senior transfer that has not only brought his skills to the Gators, but also the experience of being a part of state championship teams and that is Evangel Christian Academy transfer Cameron Davis. At 6-2, 320 pounds, Davis definitely brings size up front to the table, but he also brings so much more to that. He is a player that knows what it takes to win and opens up the running game with his ability to run block.

“Cameron Davis is a DI player,” Brecheen said. “Davis is a big time talent that is strong and has good feet. He is a powerful run blocker.”

Even though he has played with this unit this year, he feels a strong connection with each one of the members up front.

“Our offensive line plays together,” Davis said. “We try to make each other better and we have been doing well this season.”

Davis hopes to keep the good play rolling into the playoffs as he already holds offers from McNeese State, Lamar, and Rice. 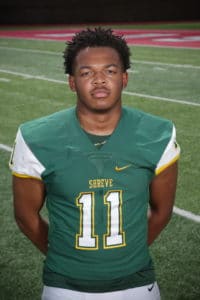 Not only are there potential college players up front on the line of scrimmage, but the Gators also have some good athletes as well. Two of those players are actually twin brothers in Nial and Brin Wilson. The majority of their accomplishments are similar. Both have received the Captain Shreve Distinguished Scholar Award, have been recognized by the Caddo Parish School Board for work with Teen Court, and have been invited to the Offense Defense All-American Bowl as well as the Blue-Grey All-American Bowl. Not only are their awards similar, but they have been offered by similar schools as well.

“Culver-Stockton College has offered me,” Nial said. “Louisiana College, Millsaps, and Air Force has shown interest as well as additional interest has been shown from various Ivy League, D-II, and D-III schools.”

“Brin Wilson is a strong kid and is a good player,” Brecheen said. “Brin has played multiple positions as he was a kickoff returner for them and moved to wide receiver from running back. He also has 4.6/40 speed.” 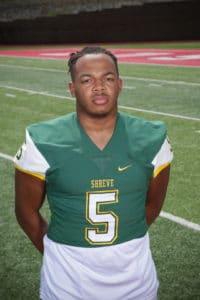 “I believe Nial Wilson is going to be a fullback at the next level,” Brecheen said. “Nial plays tight end for the team, but he is a tough and good player for them as well.”

Both brothers commented on what it is like to play with each other and what differences they see from their style of play.

“I have played with him since we could hold a ball,” Brin said. “It’s like second nature. The only thing that separates us is our position. We are very much a like in that aspect, but if I had to say a difference, he runs with more power while I run with more agility.”

“We are each other’s biggest supporters, but we are also very competitive,” Nial said. “We push each other to be better. We critique and support each other. It’s a positive having him there. I am more of a hard nose in your face player where Brin is more finesse.” 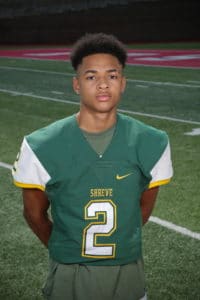 On defense, David Brown has been one of the team’s best players on the defensive side of the football. Over his career, he has not only made defensive stops including over 100 solo tackles, but he has also made a lot of splash plays for the defense. He is a type of player that does a great job of taking the ball away as he has five interceptions, two forced fumbles, and an incredible six defensive touchdowns. At 6-0, 180 pounds, Brown is a hybrid between a safety and an outside linebacker for his team. For players playing defensive hybrid roles, they have to be versatile and unafraid to do whatever needs to be done. Brown definitely fits that mold.

“David Brown is perfect for the safety position,” Brecheen said. “Brown has great 4.55/40 speed and is a good tackler. He does a good job of reading plays and then making the play. He is a DI sleeper.”

Right now, Brown has received some interest from Grambling State and Henderson State. Brecheen got the chance to see the Gators play Airline High School last week in the team’s 20-10 victory. Most of the players covered in the article are getting heavy D-II to D-III interests, but more offers and college opportunities can await for the end of the year especially if the Gators have that deep playoff run they are expecting to have.