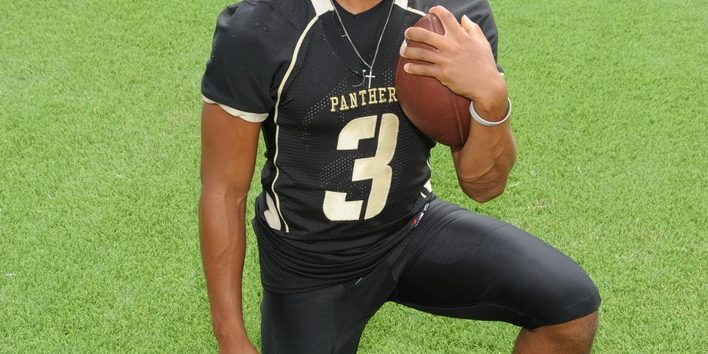 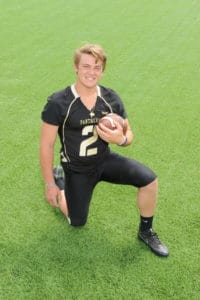 Returning at quarterback is senior Mitchell Sanford. He will be leading the offense for the Panthers in 2018.

“Mitchell is a very talented young man,” Coach Walker said. “He has offers in both football and baseball. He has tremendous arm talent and is a playmaker at the quarterback position.”

Sanford committed to Coach Paul Mainieri and the LSU baseball program as an outfielder this past summer.

Sanford threw for over 3,000 yards and 40 touchdowns in 2017 and Louisiana Football Magazine’s own recruiting specialist Lee Brecheen can see why.

“Sanford is a great athlete,” Brecheen said. “He had Kenan Jones, who is playing for LSU this year on special teams, as a receiver last year. Despite that, he is still having a great 2018 season. He could easily be a DI quarterback, but he is going to LSU for baseball and I think will be a great outfielder because of his athletic skills and being a legit 6-2, 190 pound guy. He can really run and I can see why Mainieri loves him as an outfielder. I’ve never seen him bat, but you can tell just as an athlete, he’s going to be phenomenal. He’s got that Mikie Mahtook (LSU/Tampa Bay Rays/Detroit Tigers), Antoine Duplantis (LSU) speed.

Barrett Hover will likely be the most targeted receiver after the team lost one of the best recruits in school history in Kenan Jones.

“Barrett is our best football player,” Coach Walker said. “We have asked him to do a lot of things for our team this year.”

“Hover is an all out player,” Brecheen said. “The kid is everywhere. I saw him play and he could be a DI player. He’s one of the toughest you will see in the state and is always in position to make tackles. He looks like a 4.5/40 guy on the field. Barrett will probably go I-AA but again, I think he can go DI.”

Running the ball for the Panther offense is senior Josh Jones. In Week 5 against Ascension Episcopal, Jones had 30 carries for 417 yards and four touchdowns. This strong performance helped Jones break the 1,000-yard rushing barrier in only six games.

“Josh is one of the most underrated running backs in the state,” Coach Walker said. His performance up to this point in the season should catch the attention of scouts.”

He has definitely caught the attention of Brecheen.

“I am very high on him,” Brecheen said on Jones. “I think is every bit of DI. I think Nicholls State has shown the most interest and I think they are probably going to offer him. I think Southeastern has shown interest in him also. I saw him in person and he is a big time back. He’s strong and has great vision. He has that burst and can get to the outside. He is a legitimate 5-9, 185 pounds. He’s a great student also. If this kid goes to a Southland Conference school, he will be an All-American. I’ve seen a lot of running backs, but he’s just got something that’s different to me. He needs to be in the conversation as one of the top backs in the state.”

The quarterback and running back would not have the success they have if it were not for the big boys blocking up front. Matthew Legendre is one of those guys.

“Matt has been a defensive linemen for the majority of his career,” Coach Walker said. “He has moved to offensive line this season and it has been a smooth transition. He is a road grader.”

Brecheen thinks the position change suited him because he can see Matt playing offensive guard in college.

“Legendre is a legit 6-5 350 pounds,” Brecheen said. “He is a great kid who qualified but is a little raw. He needs some work but he’s mean, straight ahead, and will take anybody to the ground blocking. He just needs to work on his feet and get his weight down to about 320 pounds. If he does that, he can be an SEC lineman. If he goes to a I-AA school he would be a big time steal. All Matt has to do is reshape his body and he will be a great offensive guard in college.”

With this talented senior class, Coach Walker has a great foundation to build on throughout the season. The Panthers have a record of 2-5 at this point, but if they win the 3 remaining games, they will finish the regular season with a .500 record, which could get them a spot in the playoffs.