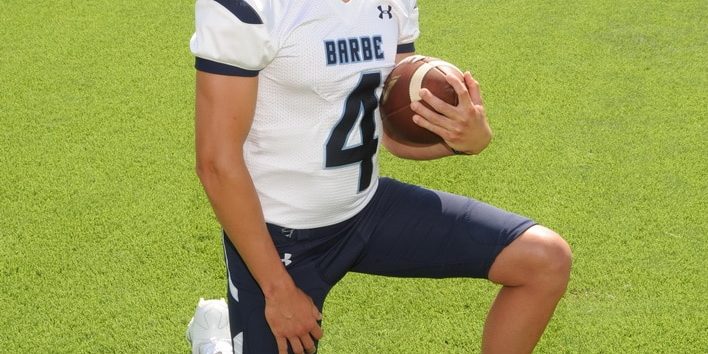 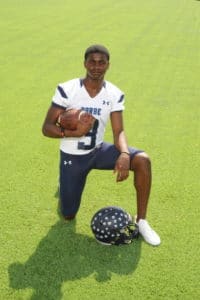 The Barbe Buccaneers have always been in the hunt for playoff pushes and state championships under Head Coach Mike Cutrea. In fact, over the last eight seasons at Barbe, Coach Cutrea has had an impressive record of 77-23 including a Class 5A state championship runner up finish in 2012. It has been a very consistent program especially on the offensive side of the football. In 2018, much was the same as the Buccaneers once again have had a great regular season with an 8-2 record. In each game of the regular season, the offense has scored at least 27 points and even in their only loss, the Bucs were able to score 35 points. For every explosive offense, it all starts with a really good quarterback and heading into the 2018 season, that is what the Bucs had. Louisiana Football Magazine’s recruiting guru Lee Brecheen was really high on the Bucs’ senior quarterback Luke Richard.

“Luke Richard has a cannon arm and great feet in the pocket,” Brecheen said. “He reads defenses as well as any quarterback that I have seen.”

Brecheen was so high on Richard that not only he put him on the South Louisiana Football Magazine edition cover, but he was also named to the 1st Team All-South Louisiana team as a quarterback. For Richard, it was a honor to be recognized as one of the best quarterbacks in the state.

“It is an honor to represent my state and to be considered as one of the best at my position in Louisiana is a blessing from above,” Richard said.

Brecheen was not the only person to have high praise for Richard as one of his star receivers Jovious Barry has spoken great things about his quarterback.

“To play with QB Luke Richard is great,” Barry said. “He could put the ball in the perfect spot most times.”

Still, even after a great career accounting for 4,000 passing yards, 1,000 career rushing yards, and 63 touchdowns, the 6-2, 185 pound quarterback is humble enough to recognize the great players at his position in the past and at the same time, acknowledging that he gave everything he had on the table.

“My main goal was to be one of the best quarterbacks in Barbe history,” Richard said. “Although I wasn’t the best, I believe I left my mark on the program.”

Moving past his high school career, Richard now is looking at where he wants to play at the next level.

“McNeese State has talked to me a lot before the coaching change,” Richard said. “I’ve had opportunities from Arkansas Monticello and Keiser University. I would like to play at the next level on a scholarship.” 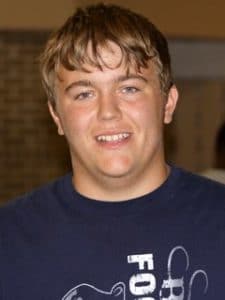 Another player that is looking for a scholarship is Barry. Barry is a big, physical receiver with great frame at 6-2, 190 pounds. Brecheen believes that this is a player that is flying under the radar as far as big schools go.

As a big receiver, Barry especially likes going up for the football and being physical when the ball is up for grabs.

“I can go up and get the ball at its highest point,” Barry said. “I also can run smooth and crisp routes.”

Like his quarterback counterpart, Barry’s goals fell short at Barbe, but he also left everything out on the field.

“My goal this season was to reach at least 1,000 yards by the end of the season,” Barry said. “It didn’t work out as I planned, but I still gave everything I could. I made the plays when it mattered the most.”

That is what counts most as he did make big plays whenever his name was called. Right now, the athletic and talented senior wide receiver is still looking for his first offer, but he would want more than nothing than playing at the next level. The Buccaneers have other seniors that Brecheen thinks could play at the next level.

“OT Derek Fontenot can be as good as he wants to be,” Brecheen said. “He has the perfect frame to be a big time player, and there is not much fat on this big kid at 6-6, 305 pounds. There is also their kicker Samuel Zahm, who has kept the special teams unit very strong for the Buccaneers. Finally, there is FB/TE Aidan Smith, who has soft hands and runs like a tank as a blocker or a runner.”

Those three players also are trying to pursue a football career at the next level. Compared to other senior classes, this may not be as deep as others in the past, but there is a lot of quality when it comes down to this group that has accounted for 36 wins in four seasons. Although the season ended in a tough first round loss to the Landry Walker Chargin’ Buccaneers, this was a group that gave everything on the line and as a result, gave the younger players a platform on how to perform hard on every given play.