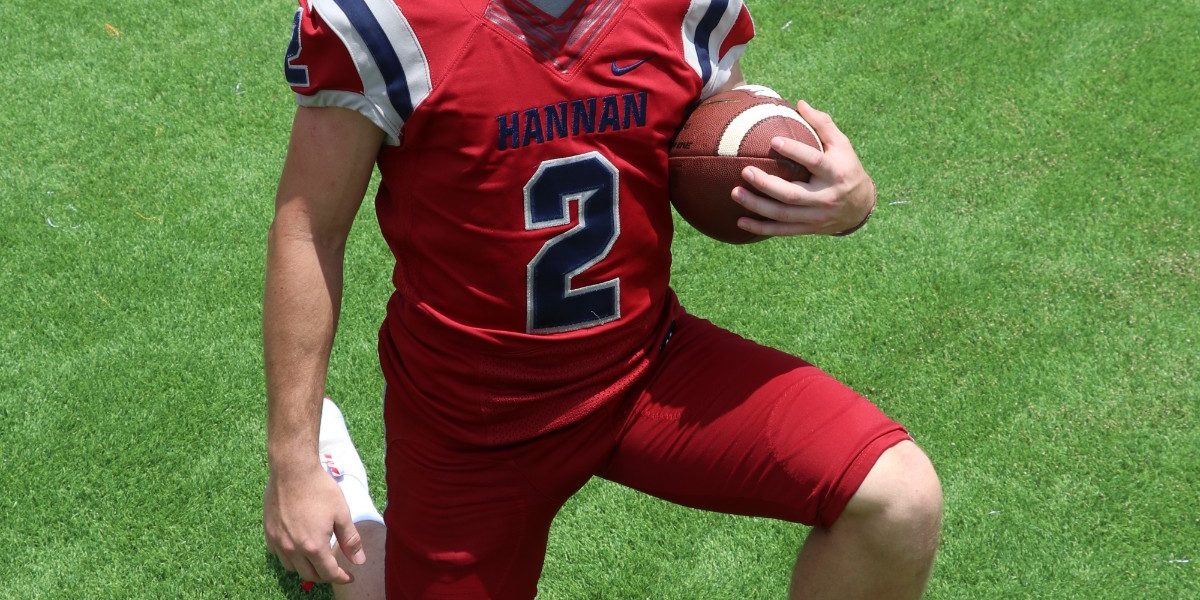 The Archbishop Hannan Hawks soared to new heights in 2017 winning nine games including a playoff game in the Division II playoffs falling to eventual state runner up De La Salle High School in the quarterfinals. It was surely a great season for the football team hailing in St. Tammany Parish, but the bad news will be trying to replace three of its best players from last season. QB Chris Rabensteiner, who threw for 1,800 yards and 24 touchdowns, TE Seth Caillouet (Texas State), and OG Christian Hoz (Arkansas State) will be tough guys to replace, but new signal caller Dawson Miller, who comes over from wide receiver has a lot of confidence in this year’s seniors to continue the success.

“Although, we had a couple seniors that were instrumental to our success last season, the entire senior class were the ones who gave us energy and the will to continue fighting,” Miller said. “However, we have been working extremely hard this offseason and we have that experience under our belts from last season. This year should be really something special.”

The Hawks may have lost a big senior class, but this upcoming senior class has played just as an important part and this team understands what it takes to carry on that success from the year before. With seniors such as Millen, DB Cameron O’Brien, WR/P Jacob Gaude, DE/OLB Carter Georges, WR Daniel Labourdette, and RB Brendan David, this group has a chance to be just as good or better than last year’s senior class.

“For me as well as my teammates, stepping up into new roles and positions and everyone embracing them has definitely made this team better,” Millen said. “Everyone is trusting our coaches and they have done a great job teaching and preparing us for this upcoming season. I feel like this year our whole team is in sync and we are all pretty close to each other. We have created a real brotherhood with one another.”

For Millen, he has been asked by his coaches to play a variety of different positions. Over his high school career, he has done a little bit of everything. He is a second team All-District returner and receiver. He has had 372 rushing yards, 15 receptions for 333 yards and a touchdown, 224 return yards, and has even made an impact recovering a fumble on special teams. His versatility at 5-10, 175 pounds has attracted programs such as Wabash and Louisiana College, which have both offered him, as well as Southeastern and McNeese State, which have shown interest. Now, Millen will accept the role of taking over last year’s signal caller Rabensteiner. Now, Millen will add the quarterback position to his list of positions that he has played at.

“This year, I want to learn as much as I can and improve in every aspect not just on the field, but I want to get better in the weight room as well as my school work,” Millen said.

Louisiana Football Magazine’s recruiting guru Lee Brecheen believes that his strengths such as his shiftiness, athleticism, and versatility will make it a great transition from one quarterback to the other.

“Dawson Millen is an athletic kid with 4.6/40 speed, moves in the open field, and is just overall a good playmaker with a good arm,” Brecheen said. “He is a really good high school football player.” 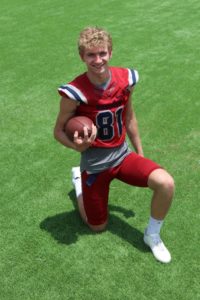 At 6-2, 180 pounds with 4.6/40 speed, Archbishop Hannan senior WR Daniel Labourdette has the tools to be a late bloomer at the end of the season. (Property of LAFM)

Millen will surround himself with some reliable receivers such as Jacob Gaude and Daniel Labourdette. According to Brecheen, Labourdette is a tall, long strong kid at 6-2, 180 pounds along with 4.65/40 and good hands. He is a guy that could be a late bloomer at the end of the year. Meanwhile, his counterpart Gaude, who is another big target at 6-3, 200 pounds, had over 400 yards receiving, two touchdowns, and a rushing touchdown, but the Honorable Mention All-District wide receiver’s calling may not be catching, but punting according to Brecheen.

“Jacob Gaude averaged over 40 yards a punt in 2017,” he said. “He is a really good punter when it comes to hang time and distance. He is also not a bad receiver to boot.”

Like Millen, Gaude believes his versatility is a strength of his and is willingly to play at any position the coaching staff puts him in.

“I am a very hard worker and a great leader,” Gaude said. “I will give 110% effort on every play and do anything to help the team no matter what.” 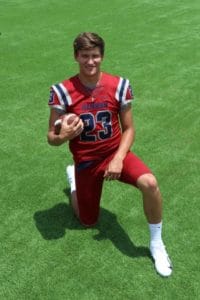 Archbishop senior WR/P Jacob Gaude has shown that he has had both good hands as well as a really good leg over his high school career. (Property of LAFM)

Gaude has already received an offer from Louisiana College and like Labourdette, he could be another player that could get some looks at the end. The Hawks have the potential of having a balanced offense as they also return senior running back Brendan David, who ran for over 1,000 yards and eight touchdowns last season. In his junior year, David racked up plenty of honors and awards being named the Northshore Player of the Week in Week 2, being named Class 3A All-State Honorable Mention, 1st Team All-District, and an All-Metro Small school finalist. The stats back up his play. At only 5-10, 200 pounds, David runs with heart, power, and 4.6/40 speed according to Brecheen.

“Brendan David runs mad and with passion,” Brecheen said. “He hits the hole really fast and is tough as nails.”

Like Gaude and Millen, David has received an offer from Louisiana College, but is seeking more.

“I am very coachable, a well rounded player, accountable for my actions, 100% committed to the game, and would like the opportunity to continue my education and football career,” David said. 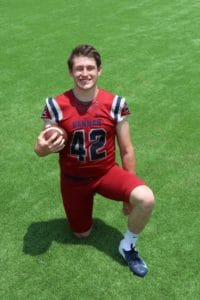 Archbishop senior RB Brendan David will be the bellcow of the offense after running for over 1,000 yards and eight touchdowns last season. (Property of LAFM)

The Hawks may not be the biggest team, but has the quickness, leadership, and toughness to give teams fits for 48 minutes and that includes both sides of the football. On the defensive side of the football, Georges and O’Brien are the leaders. At 6-3, 210 pounds, Georges is one of those hybrid defensive players that may not have the size, but does have the quickness to get offensive linemen fits. The 1st Team All-District player has received offers from Rhodes College, Wabash, Ave Maria, and Louisiana College. Georges may be the leader of the front four, but O’Brien is the leader of the secondary. Last season, O’Brien had 63 tackles and an incredible four interceptions while earning first team All-District honors. At 5-10, 172 pounds, he has received offers from Rhodes College, Louisiana College, Wabash, and Belhaven. Brecheen loves both players and how hard they play on the defensive side of the ball.

“I am very impressed with Carter Georges’ toughness,” Brecheen said. “He is a high effort player with deceptive good speed. He can move up in the rankings with time. As for Cameron O’Brien, he showed me some toughness, speed, and really good ball skills.”

Both players have a lot of confidence in their game and what they can do.

“I can read and react to the play winning 50/50 balls with my good hands,” O’Brien said.

“My biggest strengths are my speed and ability to change directions quickly,” Georges said.

What is more important than having talented players or a balanced team is having a coach that everybody believes in and can follow. The Hawks definitely have that guy in Scott Wattigny.

“Playing for Coach Watt is great,” O’Brien said. “He is building something special here at Hannan and I am glad to be a part of it.” 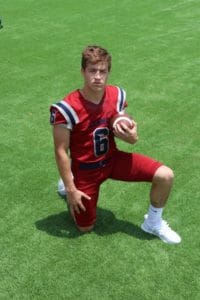 Archbishop Hannan senior DB Cameron O’ Brien’s speed and ball skills will make defenses try and throw the ball away from him this season. (Property of LAFM)

Even though the team is focused on the upcoming season, it is still always good just to reflect and look at how important the season was when it comes to the process of the program becoming a title contender in Class 3A.

“Last season’s success allowed us to prove ourselves and get our name out there as a respectable opponent in our new class of 3A,” David said. “This success has given our team confidence and helped us recognized the fact that we must prepare well for anyone attempting to take our success away.”

For the senior class, it is very important for them to take the leadership role this season after last year’s seniors helped put this year’s group in the right position to succeed. Now, this group will take the responsibility and hopes that the underclassmen takes the messages to heart just like them when they were underclassmen.

“We lost three good players as well as many other good players last season, but we are trusting in our juniors and underclassmen to step up and fill those spots,” Georges said. “We are very confident in every aspect of the team from special teams to offense to defense.” 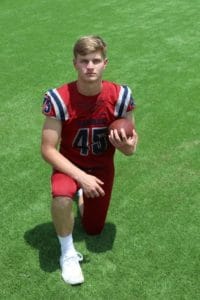 Up front defensively, DE/LB Carter Georges may not be the biggest player, but his quickness and motor make him very tough to block. (Property of LAFM)

If this team comes together on all three units, who knows what the limit is for the Hawks in 2018.

“They can expect an explosive offense and a rock solid defense this year,” Gaude said. “We expect to go 10-0 this season and take our next step in the playoffs on the road to the Dome. Our fans can expect some great football, and they can get ready for an amazing season this year. There is no slowing down from this point forward and we are only getting better every week! Winning is in our culture.”

There is certainly a culture being built at Archbishop Hannan and if that culture is winning, expect the Hawks to take new heights in 2018. The Hawks will kick off the season on Friday, August 31st against the Independence Tigers.