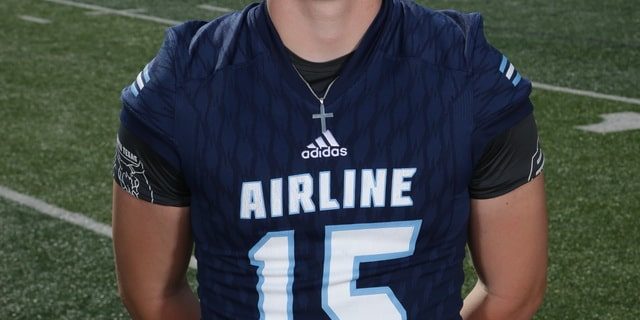 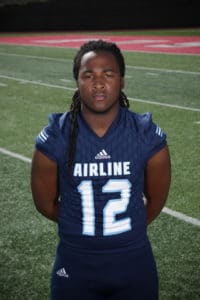 Airline senior QB/ATH Jordan Gladney was a huge part in the winning streak at the end of the season under center. Now, he will be a huge difference maker on the offensive side of the football playing multiple positions. (Property of LAFM)

There is the old saying that having two quarterbacks is just as good as having none. Well, the Airline High School Vikings prove that saying is not always the case. The Vikings, led by Head Coach Bo Meeks, had a very interesting season full of ups and downs in 2017. In the first four games of the 2017 season, Airline junior quarterback Brad Fream, who was coming off a breakout sophomore season, took control throwing for 1,100 yards and 14 touchdowns while only throwing four interceptions. It seemed that it was only the beginning of a record setting season. Unfortunately, a season ending injury put a stop to that. When a star quarterback usually goes down, it means the rest of the team goes down with him. However, it turned out that the Vikings had another pretty good signal caller backing Fream up. Jordan Gladney took over the starting role the rest of the season and was really impressive showing his dual threat ability throwing for 1,200 yards and rushing for 205 yards. The stats were impressive for Gladney, but what was more impressive was that the team won six consecutive games under Gladney including two playoff wins against Chalmette High School and St. Amant High School before falling to eventual state champion Zachary High School in the Class 5A quarterfinals. Entering a season in which the college football nation is looking at quarterback races such as the one at Alabama between Tua Tagovailoa and Jalen Hurts as well as the battle at Clemson between Trevor Lawrence and Kelly Bryant, it is the Airline quarterback battle that has taken the prep football scene in Louisiana by storm now that Fream is fully healthy coming off his injury. We were fortunate to have both quarterbacks on our North Louisiana Magazine Cover, which is the first time in our magazine history that two quarterbacks on the same team were on the cover. It would certainly be a hard decision for Coach Meeks to have two players with one that is more of a pocket passer with the other being a dual threat. Louisiana Football Magazine’s recruiting guru Lee Brecheen got the opportunity to see Fream practice over the offseason and was impressed with what he saw.

“Brad Fream is a very smart kid that’s gotten a lot bigger since the 2017 season where he missed most of the year, but still threw for 1,092 yards,” Brecheen said. “Fream is a strong kid too as he squats over 410 pounds and runs a 4.79/40. I think this kid is DI, but just needs more experience, and he will get that in his senior season to show all the scouts. He is a diamond in the rough. He has all the intangibles. Last year, he was 6-3, 195 pounds in size. Now, he is 6-4, 220 pounds. He has a cannon arm and throws the ball well in the short game to go along with good feet in pocket.” 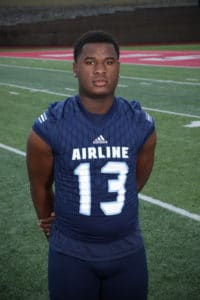 Airline senior TE Antavius Freeman has all the tools to be a special player when it is all said and done. (Property of LAFM)

So far, Fream has received only one offer from Louisiana College, but has received interests from schools like Vanderbilt, Texas State, Ohio, and Memphis in only limited time playing. Even though Fream could not work on his game physically most of last season, he was able to work on his game mentally.

“For me getting hurt last year only showed me how much I love the game,” Fream said. “It only improved my focus and intensity in the offseason. I put on 38 pounds and improved my 40 yard time from a 4.9/40 to a 4.7/40. I know how quickly it can all be taken from you so I will never be outworked.”

Brecheen also was able to see Gladney practice this year and after seeing him play over the offseason, he knows that he brings an added dimension to the Vikings’ offense.

“Jordan Gladney is built like a running back, but plays quarterback for the team too along with Fream,” Brecheen said. “He runs the ball well and has a good arm. Gladney can play several positions in college. I think he can play running back, outside linebacker, and quarterback. If he goes I-AA, he would be a linebacker or running back. At the  D-II or D-III level, he can play quarterback. Gladney did a good job when Fream went down last year to lead the team to the playoffs. He is a deceptive runner on the field and is a tough kid to bring down.”

For Gladney, coming in and taking over the starting role like he did last season was something that he has prepared for.

“Well, I knew what to do while I was on the sidelines,” Gladney said. “I payed attention when I needed to so when it was my time, I went out there and played ball.”

Like his cousin Charcandrick West (Springhill High School/Abilene Christian University/Kansas City Chiefs/New York Jets), Gladney has not been heavily recruited, but has the talent to make big plays.

It was not an easy decision by any means, but Coach Meeks made the best of his unique situation by naming Brad Fream the starting quarterback and moving Jordan Gladney to wide receiver. Still, there will be few packages that feature Gladney as the quarterback. Both players were happy by the move and are very encouraging of each other in the process. 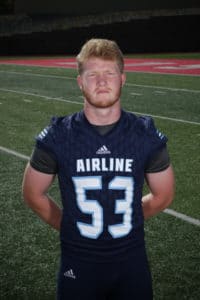 Although undersized, Airline senior offensive lineman is versatile and the guy that everybody looks up to for leadership. (Property of LAFM)

“We are handling the situation well,” Gladney said. “I will be playing a little wide receiver this year to get a little depth in the offense. Brad is my brother and a guy that can flat out sling the football.”

“Jordan and I are really close,” Fream said. “We are not against each other at all. We root for one another and that speaks to the team and they follow behind it.”

The talk may all be about the quarterbacks, but with starters returning from a 9-4 quarterfinal team a season ago, there are a lot of key contributors on the team especially a big time senior tight end that is praised by Brecheen in Antavius Freeman.

“Like Fream, Antavius Freeman gained a lot of weight since the 2017 season,” Brecheen said. “Freeman went from 210 pounds to 245 pounds at 6-2. He is a bit time athletic tight end with good hands and is once of the best tight ends in Louisiana.”

On the offensive line, Chris Dant is the leader of the group and is a really versatile player that can play all five positions.

“Chris Dant plays offensive tackle for the team, but is an offensive guard/center for college,” Brecheen said. “He plays way bigger than his size may indicate at 6-2, 220 pounds and is a tough, strong kid for his size. He needs to get up to 240-250 pounds in order to play I-AA or D-II football.”

Dant means a lot to his team and was also on the cover of our North Louisiana Magazine edition. For Dant, the word adversity has always played in his life and with that word being the central theme for Coach Meeks, there is no question why Dant is the leader of the football team. 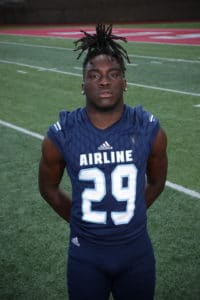 “I have not received any offers from colleges,” Dant said. “My size may not compensate for the position I am in, but I am strong willed and very motivated. I will get the job done to the best of my ability and will not hesitate to work hard to improve myself. It’s important for me to become a leader and set an example for the younger players.”

There are also some other senior sleepers that are set to make an impact the rest of the season. Talking so much about the passing game, in order to be a good offense, one must have a good running game in which the team does with senior running back Adrian Brooks.

On the defensive side of the football, Trey Taylor is another player that may not be the most intimating size wise at 6-0, 250 pounds, but he gets the job done.

“Trey Taylor is another tough and quick player that can plat at either the D-II or D-III level,” Brecheen said.

Coming off a 9-4 season and having that late season run is something that these seniors want to bring more often to the program. 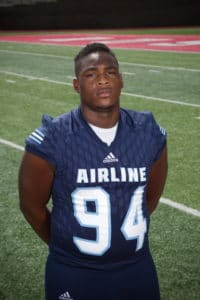 Airline senior DT Trey Taylor is another undersized interior player, but his quickness and toughness makes it tough for offensive lineman to get a hold of. (Property of LAFM)

“Last season was a great season for everyone,” Taylor said. “After losing multiple of games back to back, everyone believed that Airline was down and out, but we showed everyone what Airline Football is all about.”

It looks like that the Vikings will have to make that run again after dropping their first two games of the 2018 season against Union Parish High School and Bastrop High School. At the same time, the Vikings could have easily been 2-0 as they lost to both teams by a combined score of eight points. Now facing arguably their toughest opponent of the young season against Ruston High School at home, the team is looking for things to come their way this time around.

“It has been a tough start to the season especially since we have beaten both of these teams easily last year,” Dant said. “The only thing that kept us from winning those games was fixing simple mistakes. This week, we have really worked hard to fix those little mistakes and have adjusted accordingly to certain player strengths. We need to prove tomorrow that we are confident, aggressive, and are playing with a chip on our shoulder.”

Not only can Airline throw the opponent off with two really good quarterbacks, but this team also has the veteran leadership of guys such as Taylor and Dant to turn it around in district play and really make another late season run.