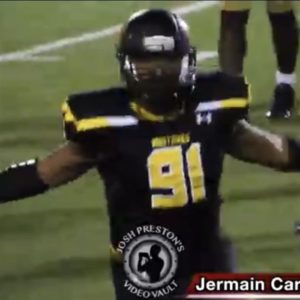 The Eleanor McMain Mustangs had a tough 2018 season going 0-10. One of the bright spots for the team is that they had some talented seniors that will be able to continue their playing career at the next level.  Two of those players are Jermain Carey and Tyrhe Brown.

Both of these players have meant a great deal to the Mustang program.  Tyhre Brown was the quarterback for the team in 2018 while Carey played on the defensive line.  They both had great senior seasons and Louisiana Football Magazine’s own recruiting specialist Lee Brecheen speaks highly on both of these players.

“Brown is the best prospect in McMain’s senior class,” Brecheen said.  “The kid is incredibly hidden and underrated. He’s played QB and WR for the team.  He has legit 4.5/40 speed. He also has that burst that the big DI schools look for. I think he can go I-AA or even DI in the end.  He could be a slot WR or a CB in college.”

Brown and Carey are expected to sign with Louisiana College.

Some other players that Brecheen believes could sign or walk on in the end are K/P Dario Alvarez, LB Gerald Parker, and WR/DB Shawn Jones.

“Parker is probably a D-II kid,” Brecheen said.  “He’s about 5-11, 220 pounds. He is a strong, tough kid.  He could be real good in college with another year of playing under his belt.”

“Alvarez was the kicker and punter for the team in 2018,” Brecheen said.  “He does not have the strongest leg but he is very consistent. He always put opponents inside the ten.  He has good hang-time on his kicks. He might be a better punter for college. I think he is a I-AA sleeper.  He could walk on and win the job at the I-AA level.”

These players may not be well known throughout the state, but they have the talent to be looked at by colleges.  High school coaches always look for guys that work hard and give it their all and that is what each of these players did while being part of the Mustang program.  That will be hard for the coaching staff to replace when the 2019 season gets here.