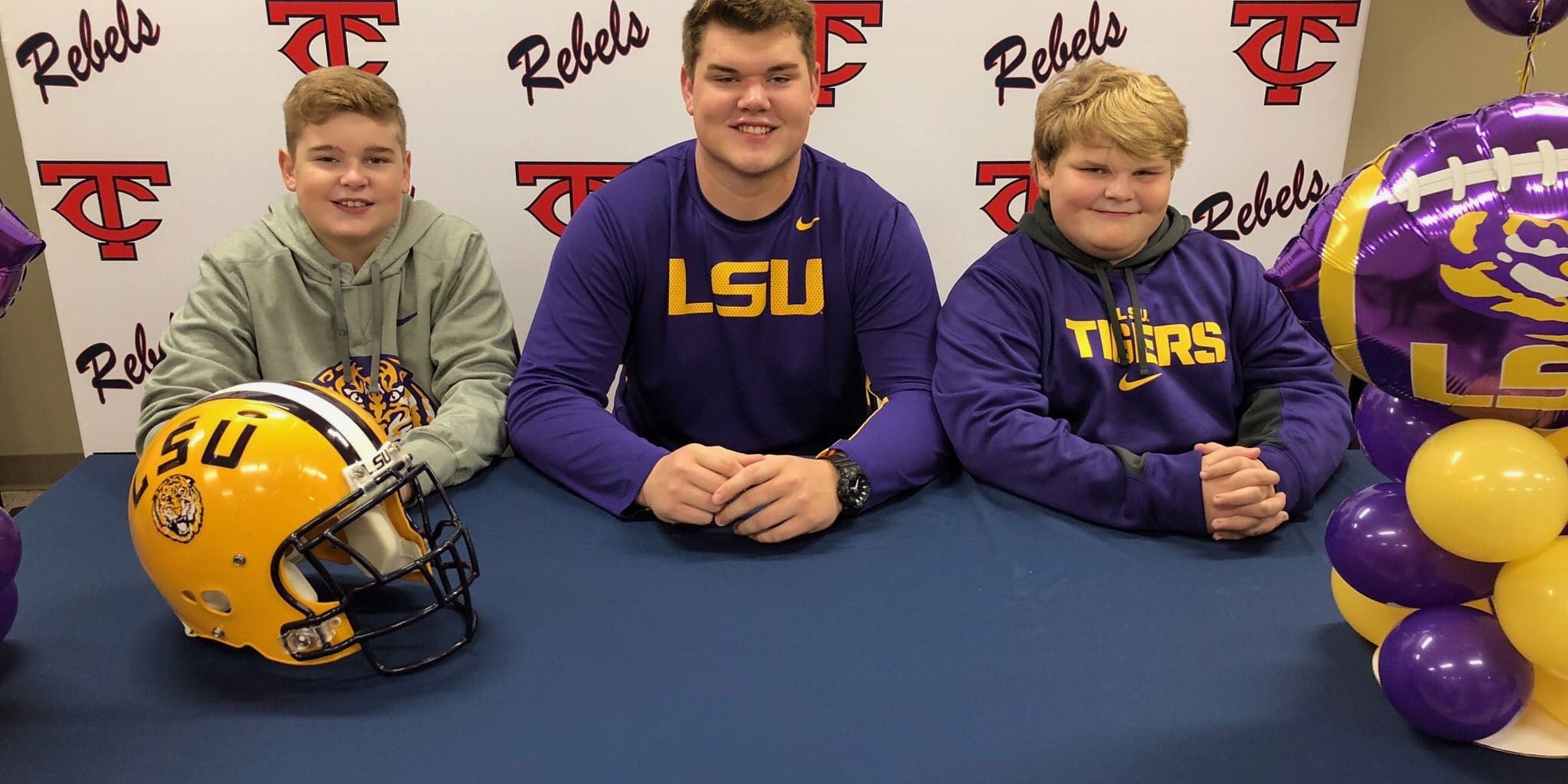 The Teurlings Catholic Rebels’ senior offensive tackle Thomas Perry has always stood out in a crowd. At 6-7, 315 pounds, Perry has always had the prototypical size to play in the SEC. Not only is Perry big, but he is strong, physical, mean, athletic, and versatile. All those qualities have attracted the LSU Tigers, which offered Perry. Ever since announcing his commitment with the Tigers on July 17, 2017, the three star offensive tackle has been as much as a sure get for the Bayou Bengals as anyone can be in today’s age of college football. Perry chose to commit to the Tigers even after receiving several offers by other colleges. The biggest reason why Perry made his college decision is because of the family aspect at LSU.

For starters, Perry’s father Adam Perry, who is now an orthopedic surgeon, played offensive tackle for the LSU Tigers from 1993-1997. Not only did his father play, but his grandfather Dan Hargett was one of the famed members of the Chinese Bandits. Hargett played for the Tigers as a defensive lineman from 1959-1961. Also, Perry’s mother was on the LSU track team where she threw discus and shot put. Perry knew that it only seemed right to play in Tiger Stadium on Saturday nights. For him, there was no other option.

“LSU is just a whole big family,” Thomas Perry said. “My dad played at LSU and everybody in my family attended LSU so it was absolutely the right choice for me.”

Perry stuck with his choice throughout the whole recruiting process and signed his letter of intent to play in the early signing period in December.

Perry’s Head Coach Dane Charpentier knows that the Tigers will be getting themselves a great player.

“I think it is his athleticism that makes him such a versatile player,” Charpentier said. “I think he can play multiple positions on the offensive line. The best thing about him is that he does not have to add any size. He is already at prototypical size and you know that he is going to get a lot stronger in their strength program. We just feel that the sky is the limit for him. He is blessed with a lot of athletic talent.”

If you do not just take Charpentier’s word on how big of a signing Perry is, take Louisiana Football Magazine’s recruiting expert Lee Brecheen, who was high on Perry from the beginning. Before the start of the 2018 football season, Brecheen put Perry on the cover of the south Louisiana Football Magazine edition, on the first team All-South Louisiana team, and also on the Tiger Rag Dirty Dozen, which was written by Brecheen.

“Thomas Perry’s dad Adam Perry played for LSU a few years ago from Covington High School and was one of the state’s strongest players,” Brecheen said. “Well, his son is 6-7, 315 pounds and is one of the strongest as well as one of the most gifted linemen in Louisiana. He is already bigger than his dad, who was 6-3, 290 when he signed with LSU. He can play offensive guard or offensive tackle for LSU as he is a tough player that moves well.”

As much of a raw talent Perry is, Teurlings Catholic’s “Big Man on Campus” literally and figuratively is just your normal high school senior. He likes to play video games and hang out with friends.

LSU Head Coach Ed Orgeron has talked about how important it is to sign players that will make a difference in the trenches and Thomas Perry will certainly be one of those players that can do so.