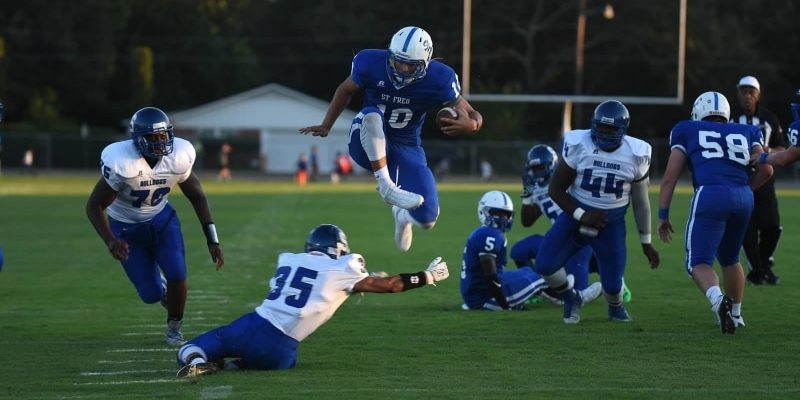 Weston Swanner is not the biggest linebacker but he is tough and quick. As a junior, he has already made a name for himself on this defense. (Photo provided by Weston Swanner)

The St. Frederick High School Warriors led by Coach Jeff Tannehill just came off a great regular season going 6-4 in a very tough district and have just won their first playoff game against St. Mary’s this past week. The team finished third in their district behind great teams in Class 1A like Oak Grove and Delhi Charter. Even though the Warriors did not exactly accomplish their goal of winning a district championship, their biggest goal this season is very much alive as the Warriors are still alive in the Class 1A playoffs and have a great chance of making it to the Superdome.

“Our goals coming this season was to win District,” Campbell Creed said. “When we did not accomplish that goal, it was on to the next goal and that was to make it far in the playoffs. The team is doing a great job in trying to accomplish the most important goal and that is a state championship.

The team has a lot of experience as the team is lead by three year starter in QB Barrett Coon as well as some playmakers on the other side of the football in DE Campbell Creed and MLB Weston Swanner. Coon is one of the most underrated quarterbacks in the classification because he has good feet, a good arm and has lead the team to the playoffs all three years as a starter. Creed and Swanner are a really good one-two punch on the defensive side of the football. This season, Creed has missed a couple of games due to an injury but is back in time for the playoffs as one of the best pass rushers on the team. Statistically, Swanner had a great season racking up almost 100 tackles with 11 tackles for loss and four sacks. Players like these guys are exceptional leaders and tough football players that will do whatever it takes to win.  Those three are not only leaders but they are close together and have a great relationship on and off the field especially the two defensive players Creed and Swanner.

“Campbell Creed is a real good friend of mine,” Swanner said. “We have a lot of fun playing on the same side of the ball.”

“Weston and I have been very good friends for a long time,” Creed said. “It is very encouraging to have a linebacker like him behind me and to point out something to me.”

Teams can have all the athletes in the world, but if they do not have communication and a relationship, they will not be as successful and according to these guys, there are a couple of qualities that separates this team from other teams.

“These guys are tough,” Creed said. “They show up and make big time plays.”

The word that comes out to me is Comradery,” Swanner said. “That best describes our football team.”

“Delhi Charter and Oak Grove are two really good teams so we can’t dwell on the past,” Coon said. “We just have to keep our head high and win one game at a time.”

That is the attitude that the team has taken and it has proved dividends to where the team wants to go.

After a 6-4 regular season where they were also 5-2 in the regular season, the team was seeded 8th in the Division IV playoff bracket. Their first challenge was the 9th seed St. Mary Tigers. This was no ordinary 9th seeded team. The Warriors had to play a team that were very experienced in playoff football. Last year, the Tigers made it all the way to the state championship game where they lost to Southern Lab. The Warriors knew that they had a big challenge and that the game was going to dictate where  they were at after losing in the first round the last two seasons. At first, the Tigers started off strong and proved to be the team to beat, but like Coon was saying, it was about not dwelling on the past and focus on the next play. The Warriors pulled off a furious comeback scoring 27 unanswered points including an amazing 20 unanswered points in 30 seconds. The final score ended up being 41-29 as the Warriors pulled off their first playoff win since the 2013 season. What was so special about 2013 was that the Warriors ended up in the state championship game in the Superdome that season, but for the Warriors, it is one game at a time. The Warriors have that mentality, but the team admitted that win was something to enjoy.

Campbell Creed has missed most of the season with an injury but is returning just in time where the team needs him the most. (Photo provided by Campbell Creed)

“It was honestly great to beat a team like that, and it was a huge confidence builder for some,” Swanner said. “Our mindset was to come out on defense and shut them down and make them throw the football, and I felt we did that.”

“The game was exciting because they were a good team with some good players so it’s always fun when you beat a good team,” Coon said. “We just stuck to our game play we had coming in and pulled out the win in a close game.”

Defeating a team that made the state championship game a year ago must be very exciting and is an important win, but arguably the test gets much tougher this upcoming Friday, and for a particular reason. The Warriors play against Ascension Episcopal which is the number one seed in the Division IV playoff bracket. Not only that this team is the number one team in the bracket and one of the favorites to make a run at the state championship, but has been very successful in the past against this St. Frederick team.

“We are very familiar with Ascension Episcopal,” Creed said. “This was a team that ended our season a year ago in the playoffs. They really stick out on film and maybe a little bit faster and stronger than us, but we have a great chance to beat them.”

“I have watched a little film and something that sticks out to me is that they fly to the football, which makes it hard to bust big plays,” Coon said.

“I have watched about a whole game so far,” Swanner said. “Their offense ,as a whole, is good, but their running back and wideout stick most out to me.”

Ascension Episcopal defeated the St. Frederick Warriors 21-7 in last year’s playoffs, and that will serve as plenty of motivation for the Warriors as they continue their quest of a state championship. Even though Swanner and Creed have another year of high school football, guys like Barrett Coon have one final chance at that run and would like nothing more than another chance at a team like Ascension Episcopal. If any team can defeat a team like the Gators, it could be the Warriors that are motivated to do so. This team is not the biggest and most athletic, but they have a lot of heart and fight to them. They do not call St. Frederick “the Warriors” for no reason. With players like Coon, Swanner, and Creed, there is always a chance to replicate what they did in the magical 2013 season. Tune in to this week’s show as QB Barrett Coon talks about this season and the upcoming matchup against the Gators.