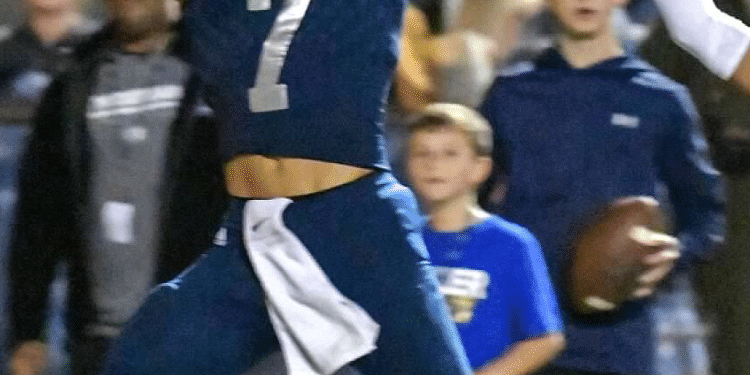 There are fewer athletic families in the state of Louisiana more versatile than the Bech family. Brett, Blain, Martin, Malcholm, and Brenna Bech all grew up together as brothers and sisters. Naturally, as siblings, it was very competitive amongst each other.

“Yep, it was very competitive,” Brett Bech said. “It was four boys and a girl. My sister was a girl, but she didn’t realize it because she wanted to beat the hell out of us boys in anything that we did.”

The Bech family’s competitive nature came from the top of the family tree with their mother Jenna as a standout basketball player at Mt. Carmel High School in Lafayette and their father receiving an athletic track scholarship to Southeastern Louisiana University.

“My dad Malcholm Bech was inducted into the Southeastern Louisiana Hall of Fame and held the record there for 20 years in the javelin and the discus,” Brett Bech said. “He was big, fast, and athletic as he was 6-2, 220 pounds and I can remember watching him as a child.”

Although Malcholm’s sons never got as big as their father, they sure kept his athletic genes.

Brett Bech came into LSU as a walk-on receiver and exceeded expectations. From 1993-1994, Brett was one of the Tigers’ top receiving targets with 89 receptions for 1,438 yards and nine touchdowns. What followed was another long and hard, but incredible path playing in multiple leagues before finding a niche with the New Orleans Saints where he started a lot of games as an un-drafted free agent. After his playing days career was over, Brett knew that his career in football wouldn’t end.

“I just read something that the greatest coaches are mediocre athletes that tried their butt off, and that’s why I wanted to become a coach,” Brett Bech said. “I wanted to do everything right and be specific in everything that I did.”

For just a 150 pound walk-on, Brett Bech really showed as a late bloomer and now because of that, he is currently the strength and conditioning coach for the Dallas Cowboys.

Brett’s younger brother Blain Bech also walked on with the Tigers and is most known for scoring a touchdown against Florida on a fake field goal and throwing the longest pass in the 2003 BCS National Championship game against Oklahoma on another fake field goal.

Malcholm Bech III went on to play baseball in Meridian and was the Mississippi Junior College player of the year there before also walking on at LSU. Their sister Brenna Bech was also a great athlete in her own right playing over four sports in high school and was one of the first signees for LSU Women’s Soccer.

Martin Bech was ranked on the Louisiana junior tennis circuit when he was an early teenager, but it is Martin’s son Jack Bech that may be the best athlete to come out of the family.

“I think that we all have the most in common is our hands,” Blain Bech said. “Besides that, Jack is on a whole other level that we were. He’s big, strong, and he can run. He’s a grown man already. Brett and I had to really work hard to get the most out of ourselves to make it at the next level. Jack works just as hard and already has all the physical tools you could ever want in a receiver. His ability to adjust to throws and high point ball is superior to any other high school receiver I’ve seen.”

Unlike his uncles Brett and Blain, who were under recruited coming out of Slidell High School, Jack Bech will be entering his senior season at St. Thomas More High School in Lafayette as one of the best wide receiver recruits in the state for the 2021 class. At 6-1, 210 pounds with 4.6/40 speed, Jack possesses arguably the best hands in the state along with the size and physicality to separate from defenders.

“My greatest asset is whenever you are in doubt, you can always throw it to me and I will always come down with it,” Jack Bech said. “If the ball is coming my way, I am catching it.”

For Jack, there have been certainly a lot of passes come his way in 2019 as he had 96 catches for 1,668 yards and 22 touchdowns while leading the Cougars to the Division II state championship. Jack had himself a breakout season in 2019 and it was due to a successful offensive system that could showcase his talents.

“I couldn’t love the offense more than what we run at STM,” Jack Bech said. “The offense is so dynamic because if we can’t run the football on you, we will kill you through the air and vice versa. Once something starts rolling and they find a plan for that, then we switch it right up to something different.”

Not only are there different options in play calls and formations, but the Cougars had the luxury of having two of the best quarterbacks in the state in Caleb Holstein, who as a Louisiana Tech signee, is STM’s all time leading passer, and then, there was his backup Walker Howard, who is the son of former LSU quarterback Jamie Howard and is one of the most talented quarterback recruits in the country for the 2022 class. Now, that Holstein has graduated, he feels that his QB-WR relationship can be just as strong with Walker this upcoming season.

“I think both guys are phenomenal quarterbacks,” Jack Bech said. “Walker can definitely move a little bit better around the pocket and his arm is incredible for a 16 year old. We were throwing the football the other day and he threw the football 68 yards. Whenever I saw that, I was shocked because the ball stayed in the air so long, but Caleb studied the game really hard and he always knew what to do with experience. I honestly think that by the first couple of weeks this season, Walker will be at that same level. I know that Caleb is going to do great at Louisiana Tech and I am ready to take the next step of the journey with Walker.”

As ironic as it sounds, just like when Jamie Howard’s favorite target at LSU was Brett Bech, it is actually their son and nephew respectively that are continuing the Howard and Bech connection a mere 26 years later, but now at STM. With having one of the most talented quarterback-wide receiver combinations back for the upcoming season, this St. Thomas More team could be even more dangerous in 2020.

“I am really excited for next season,” Jack Bech said. “Our offense is going to be unstoppable with Walker at quarterback, Carter Arceneaux, myself, Paxton Perret, Jackson Guerin, and myself as receiving threats as well as Tobin Thevenot at running back. Our defense is going to be outstanding and we will be returning a lot of starters. I think this will be the best team in STM history.”

In order to get even more focused on leading the Cougars to a second straight state championship, the three star receiver decided to commit to the Vanderbilt Commodores over 20 other offers back in March.

“Just being able to play in the SEC has always been a dream of mine,” Jack Bech said. “So, whenever that opportunity opened itself getting an offer from Vanderbilt, I was really taken away. It was a dream come true not only athletically, but academically as well being one of the top 15 universities in the country academically. Those are two big reasons, but they also have had their arms open to me the whole time. They have always called me and told me how much they wanted me. They showed me a lot of love and support throughout the whole process. Plus, they signed Donovan Kaufman from Archbishop Rummel High School and Will Sheppard from Mandeville High School so they are really opening up to recruiting the state of Louisiana.”

While other kids have limited resources to trying to get better during this quarantine time, Jack is using his athletic resources like his uncles to help him improve.

“It helps a lot because when everybody else is struggling to find trainers and places to workout because of the coronavirus, both my uncles are one call away or an hour drive away if I ever need to put in some work,” Jack Bech said. “They either tell me different drills I can work on or they are actually there training me.”

Although the Vanderbilt commit has already committed to a DI school, won a state championship, and produced great numbers along the way, Jack wants to accomplish even more.

“I want to have more yards, catches, touchdowns, wins this year, and help my team win another state championship,” Jack Bech said.

Not only does it take athleticism and hard work to drive somebody to be great, but it also takes will and passion in order to get where you want to be. Because of those traits, that is what drives Jack Bech and his incredible family to be just that.

Click the link below to check out Jack’s junior highlights: