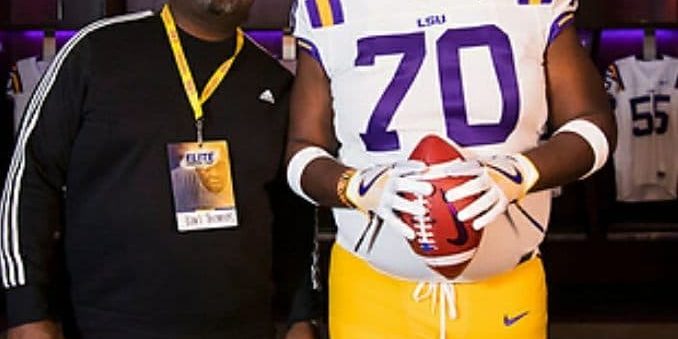 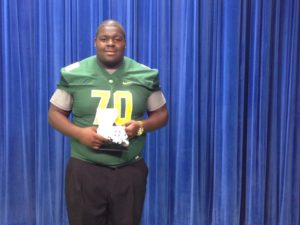 Southern Lab senior offensive guard Kardell Thomas was a force to be reckon with ever since he was a sophomore. Here he is pictured holding up LAFM’s “In the Trenches Award” at the end of the 2016 season. (Property of LAFM)

Louisiana Football Magazine’s recruit expert Lee Brecheen has been involved with the game of football for a long time especially covering some of the state’s best talent. After almost 30 years of scouting and seeing some of the best players come and go through the prep ranks, Southern Lab upcoming senior offensive guard Kardell Thomas may be one of the best football players that he has ever seen especially on the offensive line. Brecheen was overly impressed with Thomas when he was only a sophomore. In fact, Thomas won our “In the Trenches” award that year, which goes to the best offensive lineman in the state. After watching many players that would go on to play in the NFL, Thomas may just be even better than any of the guys that he has seen.

“Kardell Thomas is one of the best offensive linemen I have ever scouted,” Brecheen said. “Thomas reminds me of a more powerful version of La’el Collins (Redemptorist/LSU/Dallas Cowboys). He already looks like he is 30 years old and is strong and mean. He uses his hands like a NFL player and goes after players every play. Pancakes are normal for him every week. The kid will be a big timer when it is all said and done.”

“When you are a high level athlete, you get all the perks,” Thomas said. “You get to experience new colleges and new cities. I like everything about it. It is just a once in a lifetime thing and I am just along for the ride.”

Despite going to many campuses across the nation and being offered by DI teams like Alabama, Florida, Arizona State, Oklahoma, Florida State, Georgia, etc. For Thomas, there is no place like home as he is committed to play for the LSU Tigers. Thomas wants to make sure everybody know what his stance is right now with the Purple and Gold.

“I am a Tiger,” Thomas said. “The best thing about LSU is that is an NFL system. Just with my research, more than half of the NFL teams do run their system. Knowing that you have a 50% chance of going to a NFL team in which you already learned that system in college will make it an easier transition to the league. Also, with Coach James Craig (LSU offensive line coach) coming from the league, he can prepare you both physically and mentally when preparing for the next level. ”

When it comes to the players currently in high school right now throughout the state, there are few players that could probably make the jump from high school to the NFL and the five star offensive guard from Southern Lab is one of them. In fact, not only has Thomas dominated the competition at the high school level, but he has gone up against plenty of quality competition not just on Friday nights, but everyday in practice as well facing his own teammates.

“The players that I had trouble the most were my own teammates in practice especially Chris Allen (Southern Lab/Alabama),” Thomas said. “Everytime I had to go and block him, I had to make sure my feet are quicker. Also, he went to Alabama so we had our own little LSU-Alabama matchup in practice everyday. That is who really got me better as a player. I tell you he would come running full speed hitting that hole every day in practice from everything to one on drills to scrimmages. If you don’t prepare for that, it will knock you out. Going up against guys like Allen, Damone Clark (Southern Lab/LSU signee), Shannon Forman (Southern Lab/Arizona State), and others, they are real DI talent players and they force you to only get better. Right now, my biggest competition would be Christopher Welch and Tyler Guidry.”

Southern Lab has always been known for having college caliber players and this year, it is no exception. In fact, not only is there an SEC offensive guard in Kardell Thomas, but there is also an SEC caliber running back in the backfield as well in Tyrion Davis. For a lot of longtime fans, the duo of Thomas and Davis is almost reminiscent of another Baton Rouge power and that was when Redemptorist High School had La’el Collins blocking and Jeremy Hill (LSU/Cincinnati Bengals/New England Patriots) running the football. Thomas believes that their ability to dominate the competition complements one another just like when Collins and Hill were suiting up in their high school days. In fact, he is already pitching that idea to the star Southern Lab running back of them both taking their talents to LSU.

“It’s a blessing for both of us to be in the position that we are in,” Thomas said. “You know when you got a running back like that in the backfield. Tyrion is physically able to do just about anything. It’s amazing what we could do at LSU together. Both of us are going to continue to get better and grind.”

With Thomas being just one of the DI caliber players that Southern Lab has had over the years, it is easy to make the connection that the Kittens have dominated the competition. Being led by former LSU quarterback Marcus Randall as the head coach, the Kittens have won back to back 1A state championships in 2015 and 2016 as well finished as the state runner up in 2014. The Kittens were on their way to a three peat until the LHSAA placed sanctions on Southern Lab, which vacated the two state championship trophies, the runner up finish, and also cost Randall’s job at Southern Lab. To make matters worse, the Kittens could not play for a state championship. It was a sticky situation, which made it tough for anybody to compete.

“Last season, there were some guys that were serious about playing, some guys that didn’t care, and some people didn’t want to win,” Thomas said. “It was a mixed bag.”

However, The Kittens are indeed eligible to contend for the state championship and that is not a good sign for the rest of 1A. With national attention going on around him, Thomas has only one goal in mind.

“Our goal is to be the first Southern Lab team to have an undefeated season and that is what we are trying to do,”  Thomas said.

With the number of DI caliber players on the team and the me vs. the world mindset, the Kittens are not to be messed with in 2018. Somebody else, who should not be messed with is Thomas. At 6-4, 340, Thomas plays like his size and has plenty of big time pancake blocks. A lot of people know how strong he really is and physically opposing he is, but not a lot of people realize how athletic he really is as it is really a stuff of legends. Thomas is so athletic that he actually ran the final leg on the 4×100 and actually almost won, which is pretty incredible considering he is keeping up with runners much smaller than him. Thomas told the story on how he and his other fellow offensive lineman Cedric Banks (Southern Lab/Tennessee State) were able to run that event.

“Some people knew that I was fast, but not that fast and I was actually running that when I was 360 pounds,” Thomas said. “I think it came down to my coach. It was at the end of the event, and myself, Cedric, and Damone did not even know that we were running. Then, he asked us if we wanted to run. Once he asked us, we knew we wanted to run. To be honest with you, we were expecting somebody to drop one of the sticks. I wasn’t even expecting to run because none of us even did this before, but once I got the stick, I was like well it is go time now. That was how it went down.”

Thomas is blessed by the opportunity he is in right now. He realizes that he could not be here without the guidance of his parents and the coaches. Kardell Thomas is not only an unique football player with the rare combination of power and speed at over 350 pounds, but getting the chance to talk to him, he is also an unique guy that is like able and easy to talk to. He even wants to work at ESPN once his playing days are over. With whatever school the All-State offensive lineman chooses to play for in the end, it is guaranteed that the program will not be disappointed in the product that they are getting.