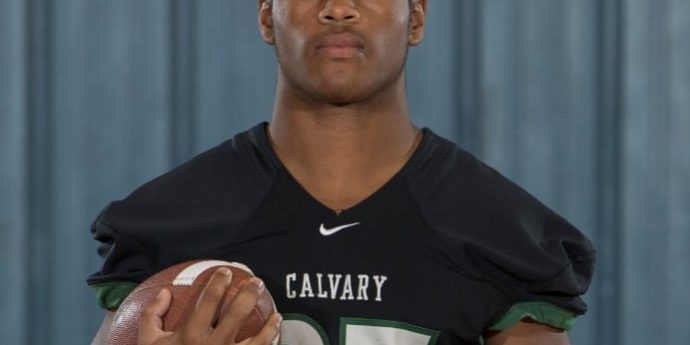 Over the past four years, many North Louisiana teams were very familiar with Calvary Baptist star running back Kordavion Washington. Ever since he broke out onto the scene as a sophomore, all Washington has done is put up crazy numbers and break plenty of school records. He became the all time leading program rusher in school history, which is a major accomplishment in considering the great players that have played for the Cavaliers in the program’s short, but storied history. Washington ended his incredible high school football career with 4,056 total yards and 56 total touchdowns. Leading the program in not only career rushing yards, but also in single season rushing touchdowns is something that he will cherish for a long time.

“I’m proud that I broke the career record that was held by Brandon Wilson (Houston/Cincinnati Bengals) as well as the most touchdowns in one season, which was held by Shun Brown (Arizona),” Washington said.

Being even in the same sentence as those two players is amazing considering that there are both NFL caliber players. Not only Calvary Baptist fans get to first see the play making running back show his ability early in his sophomore year, but the entire nation got to see it as well as the Cavaliers faced off against the Zachary Broncos in a national televised game where he ran for four touchdowns. Little did everybody know was that game would be the stepping stone for a legendary prep football career.

“Looking ahead of that game was that we had a team coming in with the best defense and the best quarterback in the state [Former Ole Miss and current Michigan quarterback Shea Patterson],” Washington said. “I talked to my offensive linemen telling them that it’s that time we have to push ourself and have fun while doing it.”

After the graduation of guys like Patterson, Washington relished the opportunity to help carry the Cavalier offense. After his breakout sophomore year in which he ran for 1,006 yards and 19 touchdowns, he continued to improve the next season as a junior rushing for 2,006 yards and 29 touchdowns along with 25 receptions for 500 yards and three more touchdowns getting more involved in the passing game. Louisiana Football Magazine’s recruiting expert Lee Brecheen was so impressed by Washington’s talent and play on the field that he invited the two star running back to not only be on the cover of the North edition of the magazine, but was also selected to be on the North All-Louisiana team heading into his senior season. For Washington, being on the cover of the magazine like the great Calvary Baptist players before him is a result of all the hard work he has put in.

“It just shows the hard work that I put in to be on the front cover of the magazine,” Washington said.

In his senior season, Washington wanted to finish his senior season on top with his best season yet. Even with defenses keying on stopping him, Washington still found ways to do what he does best and that is make plays with his 4.4 speed finishing the season with over 1,000 yards rushing for the third consecutive season. The Cavaliers finished with a 7-5 record including winning a playoff game before losing to the eventual Division III state champion Catholic New Iberia. For Washington, he may not have ended his high school career like he started out as a freshman with a state championship ring, but he would still not trade the experience. After his illustrious high school playing career was over, it was time to focus on what school he was going to attend for the next four years.

“Northwestern State and Prairie View A&M University were my options at that time, but talking to Southern Arkansas Head Coach Bill Keopple, he told me that I had a better chance of getting playing time my freshman year. They also have the best business program,” Washington said.

In the end, the promise of playing early and academics made it an easy choice to sign with the Muleriders. Even though he has a good chance of playing early as a freshman, he does realize that he needs to continue to work on his strengths and weaknesses in order to get better.

“My strength is my outside running or lining up one on one against a linebacker as a receiver,” he said. “I need to improve on my blocking and taking less hits.”

Not only does Washington want to make an impact for the Muleriders as a freshman, but his goals are way beyond that.

“I want to break a couple of records at SAU and hopefully, my dream would come true, which would be going to the draft my junior or senior year,” Washington said.

Kordavion Washington has a lot of confidence and swagger because he believes that he is the best running back in the state, but it if anybody has ever watched him play, you could see why. It also comes from his nickname Dae Dae.

“Some people called me Dae Dae because one of my coaches called me Leonardo Da Vinci because they thought I was making a work of art on the field with my spin moves and jukes, but my auntie gave me that name after this character on this movie called Friday,” Washington said.

A football player like Kordavion Washington and Da Vinci may not go hand in hand together, but athletes that make plays on any given play and at the same time make it so easy like Dae Dae is just as amazing as seeing a priceless work of art.