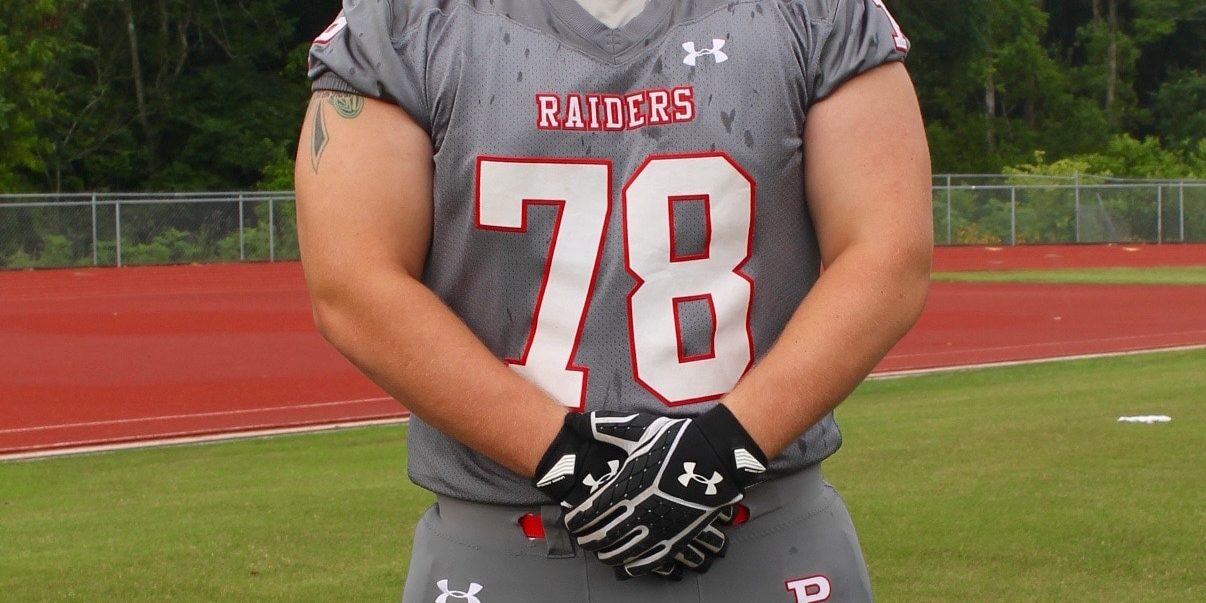 The Southeastern Lions have signed several talented offensive lineman in this year’s class including Sulphur senior Kaleb Hogg and Lakeshore senior Brennon Lanclos, but maybe the most talented lineman the team has signed is Pine senior offensive guard Brendon Kelley. As a four year senior for the Raiders, Kelley was the main driving force for the Raiders’ high powered rushing offense. At 6-5, 327, Kelley used his size and strength to maul defensive linemen and open up big holes for his running backs. From his freshman season, Kelley showed he was more than ready to compete with some of the best talent that Louisiana has to offer. Over the course of his four years, the Pine senior was able to accommodate plenty of space for his trophy case not only as an offensive lineman, but as a defensive lineman as well.

Kelley was also honored to be on the front cover of Louisiana Football Magazine’s South Edition at the beginning of the season. He was recognized as one of the best upcoming seniors in South Louisiana by recruiting expert and college scout Lee Brecheen.

“Brendon Kelley is a mean kid with good feet,” Brecheen said. “He is a DI caliber player.”

Ever since beginning his career in football, Kelley has always had the intense mentality to not only be successful at football, but to dominate his competition.

“My biggest strengths to the game are definitely my power and the speed I have coming off the line,” Kelley said. “I have the killer mentality of once I’m up, I am up, and there is no coming down. I also have the ability to finish through somebody and the play.”

Even though toughness, pure strength, intensity, and athleticism are all great attributes to have in someone’s game, Kelley feels that he needs to improve on other areas to his game in order to become a complete offensive lineman.

I need to improve on my foot work , pass blocking, and hand placement,” Kelley said.

Kelley may not be there yet as a complete offensive lineman, but if he continues improving his game, he could be very much like his football hero Joe Thomas (Wisconsin/Cleveland Browns).

“A player that I model the way I play the game after would have to be Joe Thomas,” he said. “To me, he is the simply the best offensive lineman in NFL history. He is great player, a great athlete, and a player I plan on hopefully having a better career and goal to beat his legacy.”

That sure is saying a lot considering the type of career Joe Thomas has had, but he is going to try and achieve those lofty goals. After three strong years, Kelley wanted to end his high school career with a strong senior season. Not only did he have a good individual season with the awards and recognitions he received, but the team also experienced a lot of success on the field with seven wins to go along with a playoff win in the Class 2A playoffs.

“My senior season was great,” Kelley said. “We lost some games we should have won, but in a whole, we made Pine a team that people do not want to play. I wish we would have want farther into the playoffs, but God had different plans for the team.”

Without Kelley, the offensive line will have to replace a key piece to what they do, but based on the momentum coming from the off-season, but the four year All-District offensive lineman is excited for Coach Bradley Seal’s squad in 2019 as he thinks that this is only the beginning of the success of the program.

” I know this program is going to be on a constant rise,” he said. “We are getting better and better. This is not the top of Pine football.”

Pine has also been able to send different players to colleges like Brendon Kelley. With a combination of size and power, many in-state colleges were intrigued by the All-State caliber offensive lineman. In the end, “Lion Up” was the way to go.

“McNeese State was my very first offer ever, and I was so grateful to have that opportunity for myself,” Kelley said. “In the middle of a lot of colleges looking at me, talking to me, come in to see me, Southeastern offered me.  So I went for a visit at Southeastern just as I did with McNeese and I fell in love.  Everybody was just amazing. It felt like I was truly at home there. I got along the players right away. Also, the offensive line coach has a really good connection with myself. I realized then that this is where I need to play and get my education from.”

After signing with the Lions in the early National Signing Day period, Southeastern hired a new coach in Frank Scelfo after the resignation of former SLU Head Coach and current Louisiana Lafayette defensive coordinator Ron Roberts. Since the hiring, Kelley has not talked to him too much, but is still excited for the opportunity to play for a coach with a great track record.

“I have a lot of faith in Coach Scelfo,” Kelley said. “He has a lot of coaching experience coaching at a higher level. He was a great quarterback coach for the Jaguars. I really haven’t talked to him that much, but I feel like that Southeastern will continue to become a better team with him.”

Brendan Kelley has made it pretty far in his football career, but he could not even have got to this point without everybody that has helped him along the way.

“I like to say thank you to my Mom for being at every single game, driving me from place to place, and helping me achieve my dream,” Kelley said. “Thanks to my Dad for if I need anything, he was always there and if I say that I need something, he got it for me no matter what it was. He only want to see the best for me. I like to say thank you to all my senior teammates that pushed me in wanting me to get better every single day.  Also a huge thank you to all the coaching staff, they have taught me something and told me that I will be something. They pushed me to show me my great potential and help me become the player I am today.”

For Southeastern fans, Kelley wants to prove how much of a big pickup really is and how he wants to take his talents to the NFL just the way like former Southeastern Lion and current Atlanta Falcon Robert Alford did.

“Southeastern fans should be excited to have me on their team because I will bring a lot of energy and support and even if I don’t start, I will improve the team as much as I can,” he said. “I eventually will start and be a powerhouse to run behind. I will be a new player to love.”

Not only will he be a great player to love on the field, but when his career eventually comes to an end, he wants to be a guy that is respected and gives back to people.

“When my football career ends, I plan on opening my own physical therapy center with everything including sports and fun activities all around it so I can give kids what I was unable to have,” Kelley said. “I want to give back to my community and help children.”

Hopefully for Lions fans, Kelley will be a guy that will deliver fun and joy to people off the field while delivering pain and punishment on the field.