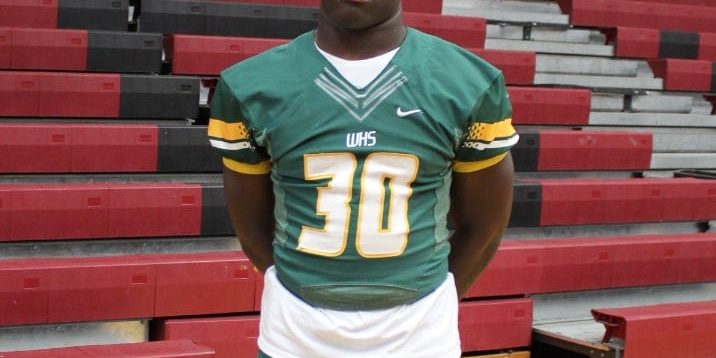 There have been a lot of great defensive players that have gone unnoticed despite having great seasons and making big plays. One of these players is Walker High School senior linebacker Josh Cook. Cook may only be 5-11, 210, which is a little smaller for your average middle linebacker. However, what he lacks in physical size, he makes up for it with his 4.5/40 speed, lateral movement, and instincts. Those three areas to Cook’s game has helped lead him to an outstanding high school career. In his breakout junior year, Cook finished with 116 tackles, 21 tackles for loss, five sacks, one punt block, three forced fumbles, and three fumble recoveries. After setting the 100 tackle plateau his junior year, he had way more stops his senior season with 174 tackles. Needless to say, the last two seasons have been pretty surreal for the tackling machine with all of the awards and recognitions that he has been getting in Livingston Parish.

Even though Cook has clearly showed what talents he has on the football field and has gained the respect of coaches that have seen or prepared against him, there was not as much love in the recruiting world for the Defensive District MVP.

“I didn’t really get a lot of love through the recruiting process,” Cook said. “I didn’t get a lot of exposure in my early years with my high school coaches in the past before Coach Lester Ricard and that my have had a big part in it. However, in my senior year and my first year with Coach Ricard, I had a lot of coaches looking at me from places like Nicholls, McNeese, Southern, Jackson State, Southeastern, but none of them offered even though I felt like I was one of the best linebackers in the state.”

Cook may have felt underappreciated, but playing for a coach like Lester Ricard, who has played quarterback for Tulane and in the NFL, the three year starter was able to get a lot of recognition due to Ricard’s connections when he was playing football. One of those connections happened to be with at the time, UTSA offensive quarterbacks coach, Frank Scelfo, who coached Ricard while he was at Tulane. Scelfo wanted to see how his former quarterback was doing in the spring as he was getting ready to begin his first year as Walker head coach. When Scelfo saw the Wildcats practice, he was immediately impressed with Cook’s game and after that practice, Cook and Scelfo’s relationship skyrocketed.

“Yes, I actually have got to talk to Coach Scelfo at one of the spring practices earlier this spring and he seemed like a really cool guy,” Cook said. “He knew who I was. I believe he’s coached Coach Ricard in the past and Coach Ricard talked to him about me. He was really excited to see me. We talked about plans for me to make an early impact on the team and how he can’t wait for me to start working with them. I can’t wait either. He was a real positive guy and seemed like a great coach to have.”

That conversation grew even more serious when Scelfo accepted the head football coaching job at Southeastern Louisiana University. At that point, Cook received a preferred walk on offer to play for the Lions and the rest was history as he signed with the college in Hammond on National Signing Day. Even though it was not an official scholarship offer, Cook was more than ready to earn it in the long run.

“Out off nowhere, Southeastern hit me with a PWO (preferred walk on) that I willingly accepted even though I would have rather an offer but I’m a guy that loves challenges and is thankful to be able to play the game I love as well as willing to earn a scholarship rather than to not play all,” Cook said. “Plus, Southeastern was always one of the colleges that was on list of where I wanted to go. It’s close to home. I love the campus and so does my parents so I’m more than happy to be going where I am. The football program is great. The facility is nice, and I can’t wait to meet the rest of the new coaching staff.”

As well as being a star football player for Walker’s football team, he was also a crucial part in the Wildcats’ state championship basketball team as well. Playing basketball and being a part of a winning team is something that he will always remember, but to him, it does not bring the same type of excitement as the game of football does.

“It was an wonderful experience you know,” he said. “I’ve been playing with those guys for over ten years. They are like my brothers and we constantly worked our butts off in order to achieve that goal and when it had happened, it was like a dream come true. However, that will be the end of my career of being a basketball player. Football has always been where my heart is.”

Not only playing football, but playing in front of his hometown is something that he will cherish even more no matter where else his football career takes him.

“All my life I’ve been living in the city of Walker and that’s the name that’s been on my chest for the longest,” Cook said “It’s just gonna be weird not wearing that name anymore and not see those same faces in the stands every Friday cheering me on.”

Whenever he gets the chance, he will go back and cheer on his alma matter with a lot of optimism heading into year two of the Ricard era.

“I feel like the future is bright for them this year,” he said. “There’s gonna be a lot of starters from last year that’s going to be returning as well as a lot of experience and talent. They should have a real good season coming up, and I look forward to them picking up from where my group left off. It’s gonna be exciting.”

The speedy linebacker has gone through all the ups and downs a player can go through, but if it was not for the guidance of his family and others, he would not be here in this position to continue what he loves to do.

“I want to thank God. Without him, there wouldn’t be a me, and he is the reason I able to do all the things that I can,” he said. “I definitely want the thank my parents for all the things they’ve done for me and for all that they do to provide for our family. They are two hard working individuals and I love them. I don’t know where I would be without them. My dad has always been my coach from peewee ball. and he’s constantly pushing me to be the best I can be and I thank him for that. I also just want to thank all my coaches I have ever had, my teammates, friends and the rest of my family. I love each and every one of them and am to have them with their support.”

What else is going to be exciting is Josh Cook competing with the other players at his position in order to get a scholarship as well as earn a lot of playing time for the Lions in the future. He has gone through a lot of obstacles including missing three fingers on his right hand due to a birth defect and the lack of scholarship offers, but it has not stopped him even one bit.

“Well I believe that everyone on Earth was created different by God in his own eyes and everyone has a purpose in life,” Cook said. “The way I look at things is “it could be worse”. I could be blind or deaf or I could’ve been created without an whole arm or leg so what I do is I thank God for what I do have and what he’s blessed me with and try to inspire others that are in the same situation I’m in or even if they’re not to not let anything hold them back no matter what the struggle is or maybe. Just as Philippians 4:13 says, “For I can do all things through Christ who strengthens me”. That’s what I feel my purpose in life kind of is.”

It is unsure how much Josh Cook will play his freshman season, but his  speed, intellect, and most importantly, heart, will be a huge boost for Southeastern’s football team this season and beyond.