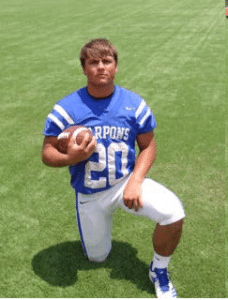 These last four years have not been easy for the South Lafourche Tarpons‘ senior class. Over that time span, the team experienced three different coaches with Dennis Skains serving as head coach in 2015, Brandon Nowlin in 2016, and for the last two seasons, Blake Forsythe in 2017 and 2018. With a constant turmoil of coaches, you would think it would be hard to buy into a head coach’s plan, but these seniors have done so. Coach Forsythe may have only coached these seniors for only two years, but he knows the impact they have made for the program during that short span.

“I really commend these guys,” Forsythe said. “They stuck through it for four years with three different head coaches in four years. All they have done is what we asked them to do, and they all worked hard during their time here.”

“We were hit with the injury bug,” Forsythe said. “There were a lot of players that had to miss time because of injury. We had to play a lot of young guys that were not as experienced in majority of our games last season.”

One of those talented seniors that had to miss the majority of the season was senior FB/RB Jake Galjour, who was a versatile player for the Tarpons making All-District Honorable Mention his junior season. Like the rest of the team, Galjour was ready to have the best season of his prep career. Unfortunately, his season ended before it really got going.

“I had goals of rushing for 1,000 yards and helping lead my team to the playoffs,” Galjour said. “Unfortunately, I did not have a chance to even try to meet my goals as I suffered an injury, which was an acute PCL tear, in a pre-season scrimmage.”

Still, missing the whole season did not prevent him from becoming a team leader and supporting his teammates.

“I am always bring a positive attitude and am willing to do extra for my team,” Galjour said. “All I can say is play every game like it’s your last!” 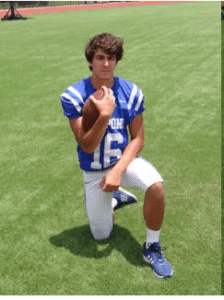 A player that exemplified that motto is senior linebacker Shane Billiot. Billiot may be undersized as a linebacker at only 5-11, 183 pounds, but his ability to read plays and tackle in open space make him a player not to underestimate. Billiot had a very productive senior season with 80 tackles, but he also had a really nice junior season with six interceptions. The 1st Team All-District selection even drew some attention from Louisiana College, which invited him for an official visit.

Then, there is senior QB Brock Bailleaux, who made sure the team was intact with the amount of injuries that were on the team. He and Billiot were two players that helped keep the Tarpons in a lot of games. The 6-1, 186 pound athlete, who has made All-District as both a quarterback and as a wide receiver, even admitted that he was a calming presence on the team when the chips were down.

“My biggest strengths are my football I.Q., and my ability to manage a game and keep our team controlled” Bailleaux said.

The record may have not been what Coach Forsythe wanted, but what he was pleased with was the effort from his team.

“Despite our record, we were still in a lot of ball games,” Forsythe said. “There were some tough, competitive games against E.D. White, Vandebilt Catholic, Central Lafourche, and even De La Salle in which we battled and really fought the other team tooth and nail.”

On the bright side, despite losing some players to injury, it was also a chance for young, inexperienced players to gain some playing time and give the coaches something to evaluate for next season.

“We want to build on execution and build on competitiveness,” Forsythe said. “We are still young. Only 10 seniors return, but they return with a lot of experience. There are eight to nine upcoming juniors that started as sophomores, and there are plenty of sophomores that got some playing time as freshmen. We have a good mix of experience and youth. Right now, the players are doing a killer job in the weight room as we get ready for another season.”

Louisiana Football Magazine’s recruiting specialist Lee Brecheen really likes the Tarpons’ junior group, but he believes that Galjour, Billiot, Bailleaux, and other seniors could find a place to play at the next level even though none of this year’s seniors have yet to sign with a college.

“Brock Bailleaux could make a great safety at the I-AA level,” Brecheen said. “I don’t think he would sign I-AA, but I think he would be a great walk on and get a scholarship. He is physical and a big time hitter at 5-11, 185. He is a tough kid that could run.”

“Jake Galjour is a very athletic kid,” Brecheen said. “He is not big at about 5-8, 180, but he can run and played almost everywhere whether it has been wide receiver, defensive back, etc. I think he can be a great slot receiver at the D-II level. He could also walk on at the I-AA level.”

“Shane Billiot is a great leader and is a smart player too,” Brecheen said. “He may be only 5-11, 190 pounds, but he is tough and is another player that could walk-on at the I-AA level.”

“I think Alex Lafont would be a great center in college,” Brecheen said. “He has good feet, but is just not tall. If he was 6-2, he would probably get some DI looks. He is about 6-0 to 6-1 at about 260 pounds, but I think if he went to a Nicholls State or a school like that, I think he could eventually get a scholarship.”

Well, for now, it looks like these four players will actually end their playing days in high school. If that is true, then, they will reflect back on the relationships they have had as a class. Both Bailleaux and Billiot gave some advice to next year’s team on how they can improve from last season.

“This past year did not turn out how we wanted it to be, but we made the most out of the season,” Bailleaux said. “My advice to next year’s team would be to overcome and fight through adversity as well as to stay together as one unit the entire season.”

With both players, unity came across as big key points for next year’s team. If the Tarpons can follow the seniors’ advice, then good things could be knocking on the team’s door this upcoming season.