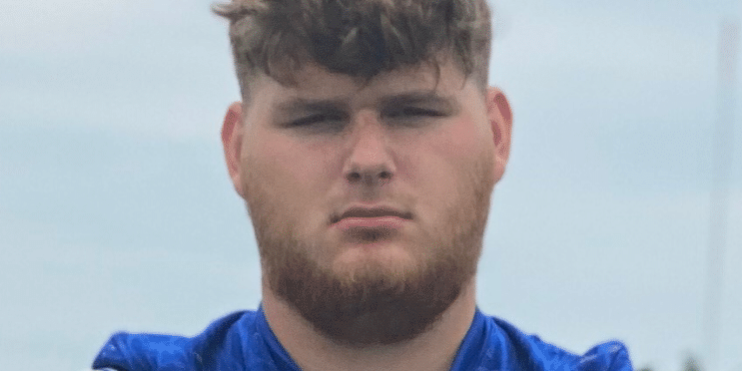 On the football field, it may seem that the players with the ball in their hands have the most pressure on them, but for South Lafourche High School offensive lineman Kendall Walker, he has a different perspective.

“I really feel comfortable anywhere on the offensive line, but I know that this year at left tackle, having to protect the quarterback blindside is supposed to be a lot of pressure, but I feel I can handle it,” Walker said.

Although Walker stated that he will play left tackle for the team in order to protect the quarterback’s blindside as the Tarpons’ best offensive lineman, Walker also has plenty of experience playing different positions along the offensive line.

“I have played center, guard, and tackle,” Walker said. “I also play some defensive line too.”

Playing not only different positions, but playing on the defensive line also gives him perspective on how to get better on the offensive line.

“Playing both ways keeps me in shape and helps me learn techniques an opponent could try on me while I’m playing offense,” Walker said.

Along with his 6-3, 270 frame and versatility, the South Lafourche High School offensive lineman has been getting recognized recently for his play. For example, Walker was one of 20 players selected to be featured on the front cover of our South edition of Louisiana Football Magazine.

“I’m honored to be one of those guys to be known as one of the best high school players in South Louisiana is a crazy achievement,” Walker said.

What the up and coming South Lafourche recruit is more proud of more than being on the cover of our magazine is the college attention he has been getting.

“Being recognized by college coaches and being told I can do big things at the next level and being able to use my talents to help the people around me get better is what I am most proud of,” Walker said. “So far, I have been offered by Millsaps, LaGrange, and Huntingdon College have all offered me.”

“I’ve spent a lot of time growing watching college football with my late Grandma,” Walker said. “She was a huge LSU fan so any SEC school would be a dream come true.”

Walker would nothing more enjoy to fulfilling his late grandmother’s wishes, but at the same time, he sees himself playing at a college that would meet his criteria.

“I definitely seeing that the team is like a family because when your teammates act as brothers, you connect on and off the field,” Walker said. “That’s always great to also have a coach as someone to look up to.”

In order to impress more colleges and have an opportunity to fulfill his own dreams, Walker acknowledges that he needs to improve both his strengths and weaknesses.

“I often get complimented on my speed and footwork, but I do need to get stronger in the weight room,” Walker said. “When I was young, my dad always preached to me about fundamentals so I guess it paid off.”

Being around his family that always teaches and supports him is what also has helped Walker develop as a player entering his senior year.

“Sports wise, my dad helped most when I was young preparing me for high school sports, but my two grandmas have had the most impact as a person,” Walker said.

The South Lafourche versatile lineman also has an unique hobby that he inherited from his family.

“I guess it runs in the family,” Walker said. “My dad always tells me stories about waiting in line for new drops on Jordans when he was younger so I guess it carried on to me. Since 7th grade, I’ve been really into sneakers.”

What Walker is into more than sneakers is playing football and for his senior season, he has set himself high goals such as earning 1st Team All-District and All-State honors while hopefully leading the team to a district championship. However, for those goals to happen, there must be a senior season to occur in the first place as the upcoming 2020 season is being up in the air.

“I think if we are able to go to school, we should be able to play and at least let the seniors have one game as a senior night,” Walker said. “It’s our last ride.”

“I feel that I’m a great leader and I’m willing to play wherever a team needs me,” Walker said. “I’m willing to do whatever a coach needs me to do in order to be successful.”

It is players like Kendall Walker that not only need, but deserve a senior season. For Walker, it is all about being with his teammates and being apart of something special no matter the recognition that comes his way.

Click link below to check out Kendall Walker’s junior highlights: