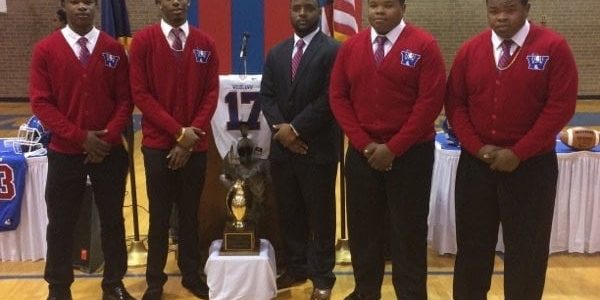 What a day for Louisiana High School football as some of the best football players sign their letter of intent to the college of their choice. There are so many talented players in the entire state of Louisiana, and it is great that they are recognized for not only what they do on the football field, but in the classroom as well. Today, Louisiana Football Magazine covered National Signing Day for four different schools. The second school that we covered today is Woodlawn (Shreveport). Back in their hayday, Woodlawn (Shreveport) was a football powerhouse in the state of Louisiana and produced plenty of great players such as Pittsburgh Steelers Hall of Fame Quarterback Terry Bradshaw, Joe Ferguson (former Arkansas and NFL quarterback), Robert Pennywell (former Grambling State and Atlanta Falcons linebacker), and many others who would go on to have great careers. Today, Coach Jerwin Wilson has rebuilt the historic Woodlawn (Shreveport) football program back to what it once was. This season, the Knights had a big time season winning ten games, a district championship, and making to the second round of the playoffs where they would go on to lose to Plaquemine High School. What is even more impressive is that this senior group started their careers for Woodlawn trying to win enough games just to get into the playoffs. Now, as seniors, they ended their football careers as District Champions and making Woodlawn a big time program once again. Earlier today at Woodlawn High School, four great players signed their letter of intent to the school of their choice. They are OL/DL Montrell Burnham, OL/DL Vontrell Burnham, CB Corey Bell, and QB Joshua Mosley. We caught up with Woodlawn Head Coach Jerwin Wilson as he talked about the seniors’ impact while at Woodlawn and what they mean to the program. Below are the following players and the college that they signed with:

The Burnham brothers are taking their talents to Wayland Baptist University. (Photo provided by Jerwin Wilson)

Corey Bell and Joshua Mosley are both really good athletes and are taking their talents to Arkansas-Pine Bluff and Garden City Community College perspectively. (Photo provided by Jerwin Wilson)