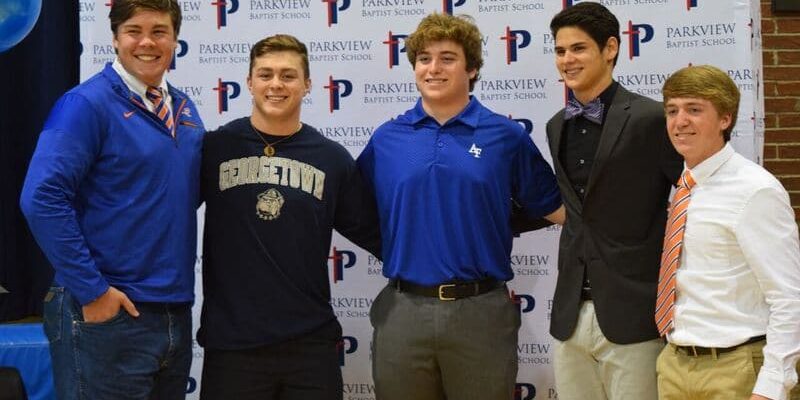 What a day for Louisiana High School football as some of the best football players sign their letter of intent to the college of their choice. There are so many talented players in the entire state of Louisiana, and it is great that they are recognized for not only what they do on the football field, but in the classroom as well. Today, Louisiana Football Magazine covered National Signing Day for four different schools. The first school that we are covering tonight is Parkview Baptist. What a senior class it has been for the Eagles. It is one of the most successful senior classes in Parkview Baptist football history with what they were able to accomplish on the football field. Over a four year period, this senior class went 38-15 overall, and more incredibly, made an appearance in the state championship game for four straight years including winning the state championship in 2015. Five talented football players signed their letter of intent earlier today for the Eagles and the following players are ATH Trent Kavanaugh, QB/DB McKane Kinchen, LB Matthew Murla, K Wade Simmons, and finally, OL/DL Dauton Sibley, who transferred to Parkview Baptist from Denham Springs after the devastating flood earlier this year. Each player had their different path, but all five ended on their high school journey with a chance to continue pursuing their promising football careers. We caught up with Parkview Baptist Head Coach Jay Mayet as he talked about these guys as players and what they mean to the Parkview Baptist program. Below are the following players and where they are going to play football in college:

Trent Kavanaugh has been a jack of all trades while at Parkview Baptist and his taking his many talents to Georgetown. (Photo provided by Jessica Province)

McKane Kinchen is taking care after his dad Brian Kinchen (former NFL tight end) on pursuing a football career as he takes his talents to Northwestern State. (Photo provided by Jessica Province)

Matthew Murla talks to the press after signing his letter of intent to Air Force. (Photo provided by Jessica Province)