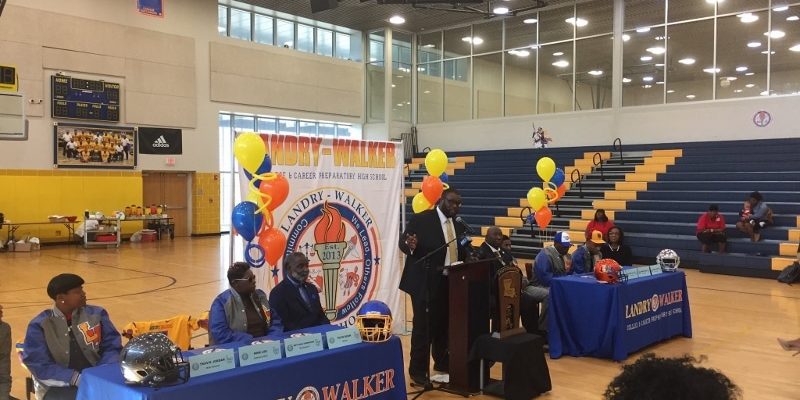 What a day for Louisiana High School football yesterday as some of the best football players signed their letter of intent to the college of their choice. There are so many talented players in the entire state of Louisiana, and it is great that they are recognized for not only what they do on the football field, but in the classroom as well. For National Signing Day, Louisiana Football Magazine covered four different schools. Two days ago, we covered Parkview Baptist and Woodlawn (Shreveport). Yesterday, we covered Comeaux High School. The final school that we covered this National Signing Day is Landry Walker High School. What a season for the Chargin’ Bucs! The team won their first state championship since combining L.B. Landry and O.P. Walker in 2013. In only four years, the Chargin’ Bucs made it all the way to the Superdome. This is the first senior class for the newly named Landry Walker High School and look at the amazing things that this class has accomplished. At the end of the season, Landry Walker was arguably one of the best teams in the entire state along with Edna Karr and Evangel Christian. This senior group is a very talented group of football players and is another example of how talented the football teams are in the New Orleans area. Six football players have signed with a college to play at the next level. Four were able to sign at Landry Walker. Those players are DE/OLB Kenneth Harton, LB Elvia Payton, RB Jakobe Walker, and WR Travis Jordan. The school also honored early enrollees QB Keytaon Thompson and RB Tevin Bush. Coach Emmanuel Powell also recognized former Landry Walker and current Kansas Freshman All-American DB Mike Lee. Powell talked about the first senior class that spent all four years at Landry Walker and what these guys mean to the program. The players and the schools that they signed with are at the bottom:

We also want to recognize WR Lamont Berzat,who played football at Landry Walker, but is signing with the University of New Orleans to pursue his basketball career.

Coach Powell also recognized Kansas DB Mike Lee, who could have played on the state championship team this season, but started at Kansas where he was an early enrollee and was named Freshman All-American. Lee had finished with 77 tackles, 1.5 for loss, two forced fumbles, and an interception.