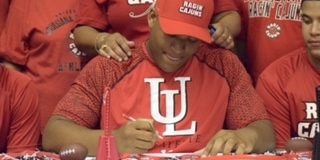 What a day for Louisiana High School football yesterday as some of the best football players signed their letter of intent to the college of their choice. There are so many talented players in the entire state of Louisiana, and it is great that they are recognized for not only what they do on the football field, but in the classroom as well. For National Signing Day, Louisiana Football Magazine covered four different schools. Yesterday, we covered Parkview Baptist and Woodlawn (Shreveport). Today, we covered Comeaux High School. The Spartans experienced some of their ups and downs this season, but for this senior class, it was all worth it. The Spartans went 5-6 this season. The team did not necessarily have the success that Parkview Baptist and Woodlawn (Shreveport) had in terms of winning district championships and making it far in the playoffs, but this season was a big step for the program. Before this season, the Spartans posted back to back 3-7 seasons that prevented the team from making the playoffs. This season broke the 3-7 curse and gave the Spartans a chance to make a push in the playoffs. Comeaux High School played tough teams such as Sulphur, Barbe, Acadiana, and played them all tough. They even had a chance to beat their first round opponent Ponchatoula, but fell short in a great effort 20-17. This senior class really turned the program around and making it better than when they first arrived on campus. Seven of those seniors will try to continue their career in college football. They are OL Shane Vallot, WR Tanarious Achan, DT Antonio Bourgeois, FS/LB Latrevian Thomas, DT Desmond Monette, WR/FS Jestin Bertsch and TE/LB Kody Duhon. These seven guys are really underrated players that colleges would really love to have on their perspective teams. We caught up with Comeaux Head Coach Doug Dotson as he talked about what those kids mean to the Spartan program and what kind of players that these colleges are getting. Below are the players and where they have committed to: