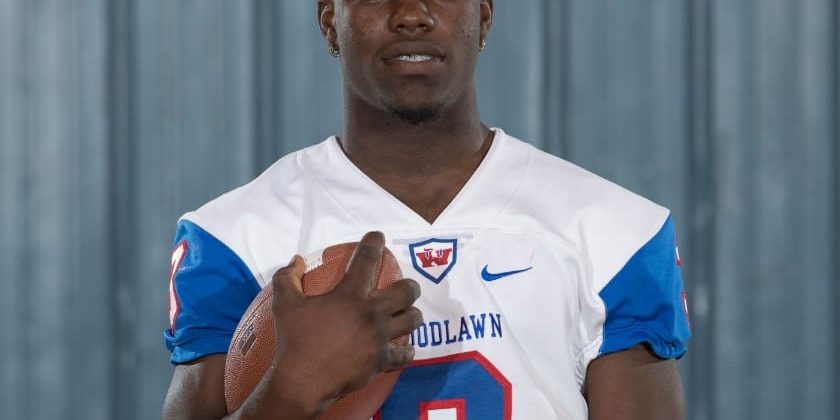 Out of all the great runners to ever come through the Shreveport area, it is Woodlawn (Shreveport) senior RB Trivenskey Mosley that has outran them all running for over 6,000 yards in his career. Mosley has put up numbers that can only happen in video games. After transferring from Southwood High School as a freshman, it did not take Mosley a lot of time for him to get fully adjusted on Woodlawn’s football team and be known as the offense’s main play maker. As a sophomore, Mosley established himself as a force to be reckoned with running for 1,601 yards while having another 259 yards receiving and 25 touchdowns. For a lot of high school players, that is a career year, but for Mosley, the best was yet to come. His junior season may have been a down year for the star running back as he ran for 1,039 yards and eight touchdowns, but the numbers only came in eight games and at the same time, he helped lead the Knights to a 9-1 regular season record as well as a second round playoff appearance in the Class 4A playoffs. However, Mosley was able to save his best as he helped carry the offense on his shoulders running for 2,473 yards and 34 touchdowns. That also does not include the special teams touchdowns as well as the receiving touchdowns he had in that same year. Needless to say, Mosley did everything he could for the Knights and he embraced that role every time he got the chance to put on the jersey.

“I love playing running back,” Mosley said. “Some people say I run with hate in my heart and that is exactly what I try to do. As a team, we were always the underdogs going into a game and we always had a chip on our shoulder so I try to run with that same passion.”

It did not matter for Mosley which role he was going to play in the Knights’ offense. Whether it was running the football, catching the football, or making things happen in the kick return and punt return game, everybody stood up to watch #3 play. One of those spectators that has always been impressed with the Class 4A All-State running back is none other than Louisiana Football Magazine’s recruit expert Lee Brecheen.

“One of the players from Woodlawn Shreveport that has big time talent is running back Trivenskey Mosley,” Brecheen said. “At 5-10, 199, he is a strong, powerful kid with speed.”

That is a good combination to have for any running back. However, Mosley believes that he still can improve on those areas and that there are other factors to his game that make him stand out.

“The way I read a linebacker and my vision are my biggest strengths,” Mosley said. “I actually do need to improve on both my power and speed in order to get better.”

Mosley was just not a great offensive play maker that happened to put up impressive statistics at Woodlawn, but he was a fresh new player for the Knights, which has always been known as a traditional powerhouse football program producing former gridiron greats such as QB Terry Bradshaw (Louisiana Tech/Pittsburgh Steelers), QB Joe Ferguson (Arkansas/NFL), LB Robert Pennywell (Grambling State/Atlanta Falcons), and others. Mosley knew the program’s storied history and wanted to help them get to where they are today under Jerwin Wilson’s leadership. Over the last two years, the Knights have established them as an elite power once again after posting a combined 19-6 record and winning three playoff games. The versatile running back has been very fortunate to play for a program like Woodlawn and has told others to embrace the program as much as he did.

“Putting on that red and blue and going to fight as a knight is something that I always will remember,” Mosley said. “As far as my teammates go, I would just tell them to keep doing their thing and pick up where we left off at.”

For a player as special as Mosley, people would think that he would be working out or playing different sports, but it is an unique hobby that keeps him occupied.

“I grew up around horses,” Mosley said. “Hanging around with them helps me a lot in the off season because it keeps me active.”

Galloping in the end zone has been something that the Woodlawn senior has been accustomed to and as a result, it has attracted many schools such as Grambling, Tulsa, UTSA, Northwestern, McNeese, and Prairie View A&M, but it was a certain DI school in Mississippi that wanted him as their runner. That school was the University of Southern Mississippi.

“It felt like family the moment I walked on campus,” he said.

That was enough for the Shreveport all-time leading rusher to sign with the Golden Eagles in the second national signing period. Southern Miss Head Coach Jay Hopson has a lot of confidence in Mosley as he was the only running back to sign in the program’s recruiting class and that is after the team lost senior Ito Smith, who has one of the best careers for a running back in team history. Even though the team lost a productive running back like Smith, Mosley feels that he can fill that role right away as he shares similar skills and talents as his predecessor.

“I do compare my game to Ito Smith as we run almost alike,” Mosley said. “I’m going to fill in his shoes and I’m coming to make a name for myself.”

Based on Trivenskey Mosley’s past four years at Woodlawn Shreveport, there is no doubt that he is going to do exactly that.