There are a lot of offensive linemen in the Class of 2018 that are way over 300 pounds including a lot of players on both sides of the football that have signed with DI schools. There is an exception to the rule and that is Ascension Episcopal senior Michael Remondet, who may only be 265 pounds compared to the other DI signees. However, Remondet has 6-4 frame, great feet, and the athleticism to be a great offensive tackle at the next level. Louisiana Football Magazine’s recruit expert Lee Brecheen loves Remondet’s upside and his ability.

“Michael Remondet has a chance to become a 300 pound tackle,” Brecheen said. “Remondet has great feet and really can move. He really has the talent to shut down great pass rushers at the next level once he fills out.”

To Remondet’s advantage, he has already faced plenty of athletic defensive linemen over his career, which has really helped him in facing top pass rushers at the DI level.

“I would say the best defensive linemen that I have faced over my career is Shannon Foreman (Southern Lab/Arizona State) as well as couple of defensive linemen from Catholic Pointe Coupee and Central Catholic,” Remondet said.

Playing against the toughest competition at the 1A level has helped him with his game, but what has helped him even more is the fact that he played multiple sports over his prep career.

“I have played football and baseball up until my junior year and then I switched to football, basketball, and track,” Remondet said. “Then, this year, I focused on football and track.”

For Remondet, playing multiple sports has had his advantages and disadvantages in regards to helping the senior offensive tackle transition to the next level.

“I lost weight playing basketball, which did not help me as far as getting bigger as an offensive lineman, but I learned to move my feet better and it really helped me with my athleticism even more,” Remondet said. “Track has definitely forced me to be stronger in everything I do. I throw shot and discus. Baseball and track really taught me how to get my strength up while basketball taught me how to move my feet.” 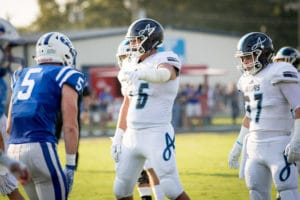 An underrated aspect of Ascension Episcopal senior OT Michael Remondet is his versatility. He has played a different position on the offensive line for all four years. Here he is at left guard. (Photo courtesy of Charles Hines Photography)

Teachable is one word that definitely describes Remondet as his coaches have bragged about how much he has improved since his freshman year. Even though Remondet has been named All-District the last three years, he even agrees how much better he has been since his very first start for the Blue Gators.

“I am really proud of my work ethic,” he said. “My work ethic really allowed me to get into the weight room without complaining and really focusing on what the goal was as well as getting stronger, faster, and being a better football player. I kind of stuck to that.”

What is most impressive about the All-District offensive lineman is that he has improved as a football player while playing four different positions along the offensive line. Remondet has played right guard his freshman year, left guard his sophomore year, right tackle his junior year, and then at left tackle his senior year. Through it all, Remondet has been the main stay on the offensive line and has had the main task of protecting his buddy senior quarterback Jake Vascocu the last two years. For Remondet, it was not a tough task as he and his quarterback would hang out together doing the hobby they both love to do besides football.

“Jake and I would go fishing all the time,” Remondet said. “We would just take the boat out any weekend we can and go bass fishing.”

Their relationship off the field helped and translated to their relationship on the field as both friends played a crucial part as juniors. The Blue Gators went all the way to the Division IV state championship game, which was the first in school history. Even though the team fell short of their first state championship losing to Southern Lab 36-9, it was only a couple of months later that the team realized they were actually the champions after Southern Lab was vacated of their two previous state championship victories as well as the team’s state runner up trophy back in 2014 due to recruiting violations. Even though Ascension Episcopal was indeed awarded the Division IV state championship, the result did not change in Remondet’s mind.

“The only thing that changed for me was that we got a ring out of it,” he said. “No matter what happened, we still lost that game. We still were not the better team no matter if they illegally recruited or not. That’s the way I see it and there is always a way to get better. We are state champions and it’s cool to have that title, but there is still more that we can do.”

Remondet, Vascocu, and the rest of the gang were motivated to go out and win the state championship in the Superdome, but that goal never got to be as Vascocu’s season ended in the third game of the season and the team’s defensive captain Christian Deville also was out for the year in the sixth game of the year. Despite the setbacks and major injuries, the Blue Gators persevered in their first season in Class 2A winning eight games and making it to the Division III playoffs where they lost to St. Thomas Aquinas. Overall, it was a tough way to end his Blue Gators’ career, but in the end, he knew the team gave it all they got.

“We never stopped playing hard,” Remondet said. “A lot of stuff did not go our way. Losing Jake in the third week of the season and having a freshman quarterback coming in, we had to change the whole dynamic of our offense. Also, losing our linebacker and leader of our defense killed us as well. We definitely should have won that first round game. If a few things fell our way, we could have been up by three touchdowns. We just could not get our offense the way we wanted with Jake, but we never stopped playing and that is what I got from the team this year.”

Unfortunately for Remondet, he will stop playing at Ascension Episcopal. The memories of playing with his teammates is something that will not leave him for a long time.

“I have been playing football with my teammates since fifth grade,” he said. “It has not gone old yet, and I don’t think it will ever would. I will make new friends, but it will be different. It won’t be the same.”

While other DI recruits may have their focus on what school they will go to, Remondet made sure to commit to a school and sign when the season is over in the New Early Signing Period so he can focus on his senior season. The two star offensive lineman was offered by many schools including Army, Columbia, Northwestern State, McNeese State, and Marshall, but for the 17 year old offensive line prospect, it came down to two schools. 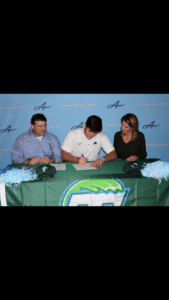 “It came down to ULL and Tulane,” Remondet said. “I really took a lot of time reflecting on both sides, but I eventually decided to choose Tulane in the end because I like the new coaching staff at Tulane and was really comfortable with them along with the school academically. It is so close to home and my family can come watch me play. The social life in New Orleans is also pretty cool as well. All of those areas played a key factor in me coming to Tulane.”

The new Tulane signee from Ascension Episcopal also received some good advice from the current Green Wave linemen on what college football life is like just coming from high school.

“In my official visit to Tulane, I talked to those guys and they told me what to expect and what the coaches would be,” Remondet said. “They told me that the coaches will be hard on you, but they will coach you up in the right way. It definitely helped having those guys give me advice like they did.”

Also, if it was not for the advice from the special people in Remondet’s life, he might not be where he is at right now.

“I definitely have to thank my parents, my family, and especially the Desormeaux Brothers in Coach Mike and Coach Matt,” he said. “Coach Matt was my offensive line coach when I was on the team in eight grade as well as from my sophomore to my senior year. He definitely taught me everything that I needed to know about the offensive line as well as Coach Mike. Coach Mike saw something in me my freshman year and he always helped me to become a better football player. Family and coaches have helped me to be where I am.”

Where Michael Remondet is at is pretty good considering that he has a DI scholarship to play at a in-state football program on the rise like Tulane under Willie Fritz and he is excited for the opportunity to make Green Wave fans happy.

“I would just tell the fans to get ready for an exciting offense,” Remondet said. “They have seen glimpses of that the last couple of years, but with the guys they signed including myself, the program is heading in the right direction and recruiting the right guys and I believe that I am one of those guys that can help Tulane get to than next step.”

Not only does Michael Remondet have a bright future in his football career as he has as much of an upside as any offensive lineman in this year’s signing class, but is also a hard working student in the classroom who has a 30 on his ACT along with a 3.9 GPA. He has the athleticism and the football I.Q. to be a great player at the next level. If he can fill his frame and keep that athletic ability, then Green Wave fans will be pretty excited about this pickup from Lafayette.