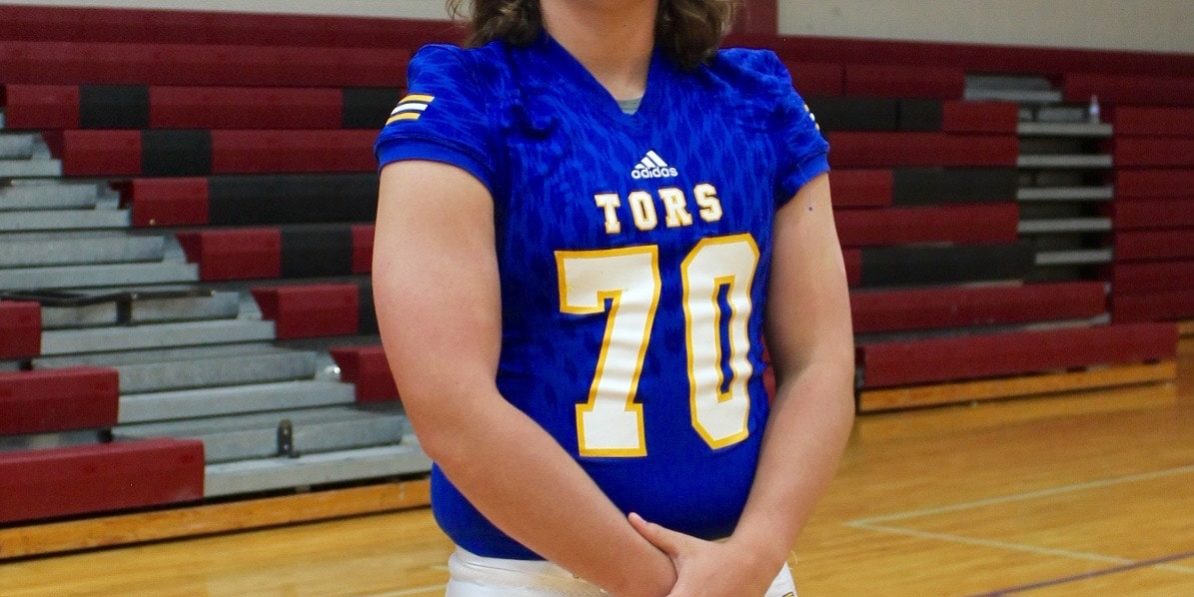 Sulphur High School senior RB Glenn Willis had a huge season as one of the top rushers in the state with 1,400 rushing yards and 18 touchdowns. As great of a player is, Willis could not have done it without his offensive linemen including senior offensive lineman Kaleb Hogg. Hogg’s biggest strength is his ability to run block and his ability helped pave the way for Willis to make many plays for the Golden Tors. Over the course of his career, Hogg has been named the two time player of the week for Sulphur while also earning 1st Team All-District, 1st Team All-Southwest, and All-State Honorable Mention. Not only has Hogg had great success on the gridiron, but he also has achieved the same type of success in the classroom as he won a scholarship award through Sulphur High School. With a 3.2 GPA and a 29 ACT score, Hogg has embraced the role of being a student athlete. He is a perfect example of what coaches want in their players and is a guy that other players look up to.

“What I enjoyed most at Sulphur is the relationship that I have with the coaches and the younger players that look up to me,” Hogg said.

Louisiana Football Magazine’s recruiting expert Lee Brecheen loves what he sees in Hogg and believes that the Sulphur senior is a DI caliber player that could be plugged in to play multiple positions along the line of scrimmage.

“I saw Kaleb Hogg play this season and he has great feet,” Brecheen said. “I thought he could have went DI. At 6-2, 290 pounds, he could play at guard or a center for the next level. I love his toughness and ability to pull as a offensive lineman too.”

Hogg agrees that he is a versatile player and that it really does not matter what position he plays on the front five as long as he is put in a position to thrive at the next level.

“I have actually been told that I will be moving from my high school spot from tackle down to guard so we will see how I can adapt from there,” Hogg said.

In speaking of high school, Hogg’s senior season started off on a very strong note as the Golden Tors were on a four game winning streak heading into the first round of the Class 5A playoffs with a 7-2 overall record, but unfortunately, ended the season way earlier than the team would have liked losing to Live Oak. Even though the team had a disappointing end to the season, the senior leader could not have been any prouder of the team this season.

“I’m really proud of my team and mostly proud of my O-line for really showing out this season as we were expected to be the weakest part of our team, but we really pulled through.” Hogg said. “I did the best I could and am happy with myself.”

As a senior leader for the Golden Tors and as somebody that the other players look up to, Hogg has a special message for his team for next season.

“I think the best message is just to stick together and really just cherish the brotherhood,” Hogg said. “I think they can only get better.”

Hogg has done the best he could over his career and as a result, he received some D-III offers and a preferred walk-on offer from a DI school, but those offers were not enough when a certain in-state college gave the versatile Sulphur product an intriguing offer. Hogg would take that offer and sign with that school. That particular college would be Southeastern Louisiana University in Hammond.

“I had a couple of smaller offers from D-III schools as well as a preferred walk-on offer from ULL, but Southeastern had the best offer and really felt like family,” Hogg said.

Not only was Southeastern the most intriguing school for Hogg, but his former teammate Byron Walker, who is currently playing quarterback for the Lions, has given Hogg advice throughout the process about the football program and what they expect.

“Byron did give me some advice about how much faster it is at Southeastern and how much more work that there needs to be put in college football,” he said. “He has done a great job of preparing for the future.”

The future of Southeastern football is encouraging for Lion fans as the university announced Frank Scelfo as head coach after the resignation of Ron Roberts, who is now the defensive coordinator for the University of Louisiana Lafayette. Hogg has actually communicated with Scelfo in his short time there than Roberts.

“I had never met Coach Roberts, but on my visit, I had a couple of visits with Coach Scelfo,” he said. “I am glad he came to the school.”

As far as strengths and weaknesses go, Hogg knows what he is good at and what he needs to improve on once he does arrive on campus.

“My biggest strength would be my aggressiveness and ability to finish a block,” Hogg said. “However, I can always get stronger as well as keep a more level head in game situations.”

Hogg enjoys where he is at right now and it is because of the people who support him.

“I would like to thank my coaches and my family for really pushing me to be on my best,” he said.

Hogg has not really reflected on what he wants his major to be, but is focused right now on his football career and making an impact for Southeastern’s football team.

“The fans should be excited to have me because I think I will bring a special dynamic to the offensive line,” he said.

Kaleb Hogg is a vocal leader, a physical player, and a tough player. Those are the type of old school football players that you need now in today’s game. What also sets him apart is that he plays his game in his own way.

“There is really no college or professional player I have modeled my play after,” Hogg said. “I’ve just figured out what works for me and do that.”

Players like Kaleb Hogg are special players that form their own path when it comes to playing the game of football.