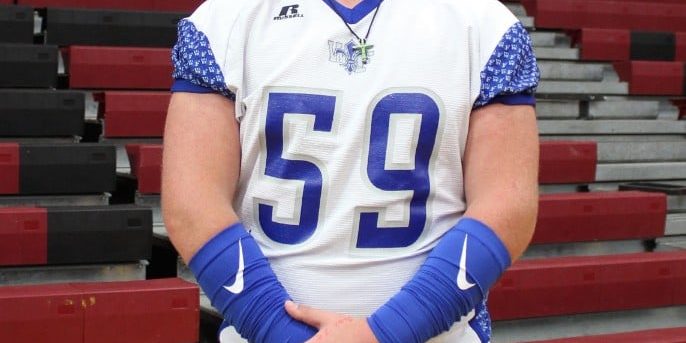 In 2017, the West Feliciana Saints football team won their first state championship in program history. Making most of the headlines was the dynamic trio of QB Derek Turner (Louisiana Tech signee), ATH Davon “Smoke” Harris (Louisiana Tech signee), and ATH Derius Davis (TCU signee). The three explosive play makers, who put on eye opening plays every time they touched the football or when they made plays on defense, could not have all the success they have had without their offensive and defensive lines led by senior OG/DT Zakk McKeehan.

“Well without our excellent offensive and defensive lines, it would very difficult for them to make these big plays consistently so I have to give credit to the two lines first,” McKeehan said. “However, just the caliber of athletes with strength and blinding speed just propels us over the top of any competition. In practice, we never took days off so we would always see the best of them as well as the line because in the end, the ultimate goal was a ring.

McKeehan was a force to be reckoned with on both sides of the football as he tried to make that goal a reality. As an offensive guard, McKeehan helped lead the path for the high powered Saint offensive attack. On the defensive side of the football, McKeehan made a bigger impact as he was almost impossible for opposing offensive linemen to block. In 2017, McKeehan had 55 total tackles, five assists, 25 tackles for loss, seven sacks, eight quarterback hurries, five forced fumbles, and three fumble recoveries. In addition to putting up those incredible numbers, he has also been named All-District two times, All-Metro, and an All-State honoree, but McKeehan would admit that he would trade all of his individual accomplishments for that feeling he shared with the team and the rest of the West Feliciana community on December 8th in the Superdome.

“It means the world,” McKeehan said. “It is a very extravagant thing to finally do something that no one has never made it or done in the history of the school. Our community deserve much credit. They always stuck with us no matter what. They are the best fans in the state of Louisiana.”

Heading into the 2017 season, West Feliciana was always a team that had a lot of talent and would always be a state championship contender, but for some reason, they have fallen short of their goals the last couple of seasons. However, with the most talent arguably in school history and great leadership, everybody knew it was the Saints’ year to march their way to the Superdome. Still, the team had to fight and earn their way in order to reach their goals. McKeehan was one of the senior leaders on the football team and his demeanor happened to be another secret to the team’s success as he always seemed relax before each game regardless if it was a scrimmage or the state championship game. For McKeehan, there is a method to his routine.

“I’m relax in the fact I know what I have to do to dominate my opposition every snap, but never quite, I’m always the loudest one getting ready,” McKeehan said. “My routine was after our pregame meal come down, I would blow up my twin size air mattress, sleep until an hour before game time, get dressed, have meetings, and then go do what it takes to keep winning.”

McKeehan sure did win a lot of games over his career, but even with the departure of some of the Saints’ key players from their state title run, there is still a lot of optimism that the Saints can continue contending for state championships not only in 2018, but beyond. He believes that the experience of playing in the state title game will benefit the team in the future.

“I would tell the guys to keep the ball rolling and remember the feeling of us as we first walked in the Super dome for our practice as we were all star struck,” McKeehan said.

Zakk McKeehan may be gone next season for the football team, but not necessarily the family name as his younger brother Destin will be on the team. For the 6-4, 287 pound two way lineman, West Feliciana was not only a school, but part of his family for four years.

“Besides my parents, I want to thank every coach on the staff and our phenomenal fans for helping me be where I am today,” McKeehan said.

McKeehan was one of eight Saints to sign with colleges to play football at the next level including one of four on the team to sign at the DI level. Thanks to his 4.9/40 speed, toughness, and size, McKeehan has been offered by plenty of schools. For a long period of time, McKeehan was actually committed to play for University of Louisiana Monroe, but in December, the three star lineman changed his mind as he decommitted from ULM and committed to play for Georgia Tech. Just a couple of days later, he took advantage of the new early signing period and chose to play for the Yellow Jackets. For McKeehan, football was only one part of the reason that he made the decision to spend his college career in Atlanta, Georgia rather than in his home state.

“The quality of football as well as the quality of the education was the reason I chose Georgia Tech,” McKeehan said. “Without the football aspect, you still can receive a diploma from The Georgia Institute of  Technology.  You can have almost literally any job you want making up to six figures a year. A little study was put together at Georgia Tech that came up that one out of three Georgia Tech football players became millionaires not counting the players in the NFL.  For the football aspect, I always wanted to play at a Power Five school, and it has came true being Georgia Tech is in the ACC. I get to play great football teams and actually compete.”

For the two way player, McKeehan can adjust to either side of the football easily. His versatility could be a huge asset as he soon starts his college football career.

Even a confident player like McKeehan knows that adjusting from high school football to college football will not be easy.

“Strength is always a huge thing going to the next level so strength needs to always be improved.” McKeehan said.

Football is a big part of the star lineman’s life, but when it is all said and done, there is one thing that he would like to do.

“I enjoy fishing in the offseason,” he said. “When my football career is over, I would like to start my own fishing charter in Grand Isle or the Florida Keys.”

What else is unique about McKeehan is that he models the way he plays the game not after a lineman, but a corner back.

“Honestly, it’s not my position, but Tyrann Mathieu is somebody I model my game after when he played at LSU because he was relentless in everything he did on the field until the clock hit four zeros,” he said.

One thing is for sure is that McKeehan will give his opponent nightmares for four quarters and will be relentless until the clock does indeed reach zero. As of right now, he will play offensive guard for the Yellow Jackets as his experience blocking in an option offense will carry over to the Yellow Jackets, but if anything happens, he could also be another option on the other side of the football. Where ever the former Saint will be playing at Georgia Tech, he knows that the Yellow Jackets will be getting one thing once he arrives on campus.

“Georgia Tech fans should be excited to have me because they just got a future College Football Hall of Fame inductee,” McKeehan said.

With Zakk McKeehan’s attitude, confidence, athletic ability, versatility, and intensity, the Yellow Jackets will may be getting their next great player.