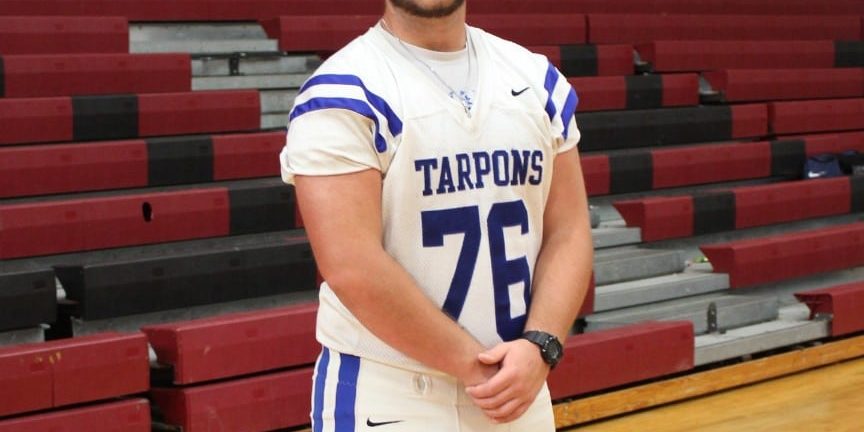 The Nicholls State football team has been one of the hottest teams over the last couple of years in the Southland Conference under Tim Rebowe. A major reason for the Colonels’ success has been their ability to sign underrated talent in the state of Louisiana. The Colonels did it once again in this year’s signing class signing dynamic players such as De La Salle QB Julien Gums, and St. Charles Catholic QB Lloyd Nash along with signing one of the best offensive linemen in the state in Houma’s own Chad Cheramie Jr. from South Lafourche High School. Cheramie is a four year starter for the Tarpons and has accomplished a lot over that period of time being named 1st team All-District two times, 1st team all region two times, All State Honorable Mention,  LHSCA 1st team All-State, and three time linemen of the year for South Lafourche High School. In addition to that, Cheramie was also on the cover of our South Louisiana football magazine cover and even made an appearance on our T.V. show earlier this year. Louisiana Football Magazine’s recruit expert Lee Brecheen believes that Cheramie has what it takes to be a great college player.

“Chad Cheramie has a lot of upside for his position,” Brecheen said. “He has great feet, great size, and will pancake anybody in his way. He is only going to get better as he continues to get bigger and stronger.”

Cheramie has been very grateful to Brecheen along with the rest of the Louisiana Football Magazine staff for getting his name out there when it comes to not only the magazine but the TV show as well.

“It means the world to me,” Cheramie said. “I’m very humbled and honored to be recognized by Mr. Brecheen and to be called one of the best in the state lights a fire in my heart to prove to everybody that thinks differently.”

For anybody that does think differently about Cheramie’s play, just do not confront him on the football field as he is not only big at 6-4, 290, but he is athletic and strong. Athleticism and size is a deadly combination for a big offensive lineman, but what is most important is how he finishes his blocks on every play. For Cheramie, there are two major reasons on why he is one of the best blockers in the state the last couple of seasons.

“My biggest strength to my game, as an offensive linemen, would be my ability to get great hand placement and also my footwork,” Cheramie said. “The key to every great block are those two things. Also, my ability to block in open space is another big strength. I can pull and get up to linebackers very well.”

Cheramie can do it all as he has had plenty of pancake blocks over his career whether it is pass or run blocking. His strengths have attracted some Southland Conference schools including McNeese State and Southeastern Louisiana University, but it was the senior Tarpon’s hometown college that made the most sense in the end.

“My decision to go to Nicholls is because it was closer to my family and it is a beautiful campus,” Cheramie said. “The coaching staff is tremendous, and I see a very bright future for their program. Coach Rebowe has done some amazing things and has gained the support of a lot of people in my home town so it was just a calling for me to make my community proud and show out where everyone here can drive an hour and watch a local TARPON do great things and get SLHS back on the map.”

In speaking of getting SLHS back on the map, Cheramie believes that his soon to be alma matter will have plenty of success in the future after the team finished with a 6-5 record losing in the first round of the Class 4A playoffs to Tioga with a first year head coach in Blake Forsythe.

“My senior season ended with a lot of unfinished business, but I’m grateful to be able to continue at the next level,” Cheramie said. “Coach Forsythe came in and installed a great offense. He coached and conditioned us to perform it to perfection. I am looking forward to Coach Forsythe leading the Tarpons to a great future. ”

The All-State offensive lineman was a three time lineman of the year for the football team and he knows what it takes in order to not only have individual success but team success.

“My message to the future of SLHS football is that the season has already begun,” he said. “When we shook hands after our last game, preparation for this upcoming season started. Also to not take days off. Every practice is hard. We practice every day for a purpose, and you shouldn’t take it for granted. You will one day look back and wish you could strap on pads in 100 degree weather again, but you won’t be able to. Enjoy it while you can.”

For Cheramie, he is looking forward to continuing his career at Nicholls State University, but it is something about the Friday night lights that he will always reflect on.

“I am going to miss the Tarpon Walk the most,” Cheramie said. “This is a point right before we take the field that we walk around our stadium and are greeted by the entire community. It really pumps you up seeing alumni and also the young kids who look up to you cheering you on. I get goosebumps just thinking about it!”

Cheramie’s prep football career may be over, but that does not mean that he will abandon the Tarpon football program anytime soon.

“Football season doesn’t really end for me,” he said. “I’m always involved in camps, and off-season workout programs. Now that my career at SLHS is over, I am still involved with the team and will be attending many spring practices to make the upcoming offensive line the best they can be.”

Cheramie never really modeled his game on anyone until he found about a late great Tiger offensive lineman who was on his way of having a promising NFL career before a freak accident ended his life.

“Eric Andolsek (LSU/Detroit Lions) was somebody that I loved watching film on,” he said. “Going to the linemen camp at Nicholls over the summers, they always showed his highlights, and it amazed me how physical he was. I model my game after him because of that.”

Like the late, great Andolsek, Cheramie is a tough football player who will gain leverage and pancake the opposing defensive lineman. Even though Cheramie is as tough as it comes, he is still a humble young man that is grateful for everything that has been thrown at him.

“First off, I would like to thank God,” Cheramie said. “He has a plan for me and I will do everything I can to fulfill his plan for me. Secondly, I would like to thank all the coaches who recognized my potential and had a hand in my success as a player and a man. Lastly, I want to thank my family, friends, and the amazing community I live in. All of these people have made me who I am today and I cannot express my gratitude for them in words. I also would like to shout out my best friend since middle school Daniel Dickinson. He is an outstanding offensive/defensive linemen, and team leader that could easily be a standout player at the next level. Also Jeremy Rogers, who is an absolute beast on the field, he too could be great at the collegiate level. Corbin Allen is a player who is overlooked, but is an amazing athlete and lastly Jhy Orgeron, who is a young and very talented offensive linemen that is like a brother to me.”

Cheramie knows exactly what he wants to do when his playing days are over as he wants to give the game that has given him so much joy and share it to others.

“When my career comes to an end, I would like to bring my passion for football and other sports to younger kids,” Cheramie said. “Also I would like to settle close to home, maybe the Thibodaux area, and enjoy my life being around great people and great food.”

For Nicholls State fans, they are not getting a great football player, but they are getting essentially one of their own.

“Nicholls State fans should be excited about me because I will bring a “down the bayou” tempo and aggressiveness to their Colonels and also a lot of great fans to tailgate with,” Cheramie said.

When talking to a player like Cheramie, who is a great player from South Lafourche High School, is down from the bayou, wants to coach, and enjoys the game of football, the more it is like talking to another Ed Orgeron (LSU Head Coach). Like Orgeron, Cheramie is a South Lafourche product that the community should be really proud of.