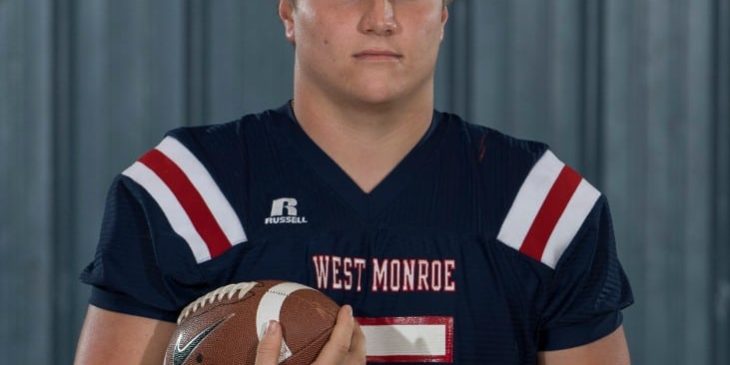 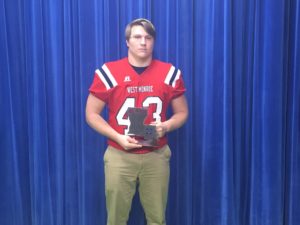 In terms of making tackles and bringing the ball carrier down, nobody has done it better in this senior class than West Monroe MLB John Bailey Gullatt. Not only is he one of the best players on West Monroe’s team this season, but he is also one of the program’s best defensive players in the history of the school and that is saying a lot for a program that has produced multiple players that went on to have great careers at the NFL. Louisiana Football Magazine’s recruit guru Lee Brecheen has seen over hundreds of teams and has seen over 1,000 players. Needless to say, Brecheen has the 6-0, 230 pound linebacker at the top of his list as he selected Gullatt as the Louisiana Football Magazine’s 5A Co-Defensive Player of the Year in 2016 and in the following year, he put Gullatt on the front cover of the North edition of this year’s copy of Louisiana Football Magazine as well as on the pre-season All-North Louisiana team as a middle linebacker.

“John Bailey Gullatt does not hand time 4.6/40, but put him on the field in the middle of the defense and I promise you he will make tackles,” Brecheen said. “He is tough and fast enough to play DI football somewhere as a middle linebacker.”

For Gullatt, Louisiana Football Magazine is not the only media source that has recognized his ability to play on the football field. His other awards include being a two time LSWA All-State selection, and LSWA 2016 Class 5A Defensive Player of the Year. What is most impressive is how intelligent Gullatt is as a student as he posted a 30 on his ACT along with having a 3.9 GPA. Gullatt is honored to have this career and is humbled no matter how many awards he achieves.

“These awards really mean a lot to me,” Gullatt said. “Being recognized as one of the top players in a state that produces so many college and NFL players definitely means a lot to have the respect whether it is from Louisiana Football Magazine, coaches, sports writers, or any other forms of media.”

Gullatt may have posted some impressive individual numbers such as 530 tackles, which is the all-time West Monroe tackle record. Just like many of the great middle linebackers in the NFL today including Luke Kuechly (Boston College/Carolina Panthers) and others, Gullatt does not just gain a physical advantage at over 230 pounds, but also a mental advantage against his opponents.

“I always prepare,” Gullatt said. “I watch a lot of film and I pay a lot more attention to practice than some people do. I always think about what the team is going to do and in what situation whether it would be second and six or third and long. It helps me know what is coming.”

“The Tackle Machine” nicknamed by his head coach Jerry Arledge used his instincts and preparation to do just that over his career. In his junior year, Gullatt had an incredible 189 tackles, 16 tackles for loss, two sacks, two pass breakups, and a fumble recovery return for a touchdown. In his senior season, Gullatt’s tackle production slipped a little bit but not much as he still managed to easily have 133 tackles along with an increase in sack production with six. Even as great of a tackler he is, there is still an area to his game that needs to be crafted at the next college level.

“I will need to work on my pass coverage just because I did not do too much of that in high school,” Gullatt said. “I would just need to work on that in order to get the feel of it.”

Gullatt has got a lot of work in against not only some of the top competition in Louisiana’s highest level in prep football on Fridays, but also everyday in practice against the 2017 Louisiana Gatorade Player of the Year and Alabama Football signee in order to continue raising the senior linebacker’s game.

“It was always tough to go against Slade Bolden and that offense everyday in practice,” Gullatt said. “A lot of times, it was the hardest part of that week. They always kept us in tip top shape for our games on Friday, and we would like to think that we did the same for them.”

The team did get in tip top shape over the last two seasons. In 2016, Jerry Arledge led the Rebels to their first state championship appearance since the late, great Don Shows led the Rebels to a state championship title in 2011. Although the Rebels fell short of the title against the Landry-Walker Chargin’ Buccaneers that season, there was plenty of optimism as their two young bright stars returned for their senior season in 2017. The Rebels were on a mission to not only get back to the Mercedes Benz Super dome, but to win it as the team had an undefeated regular season, a district championship, and the Class 5A #1 seed. Unfortunately, the Rebels’ run to the Dome ended in the semis-finals against the eventual state champion Zachary Broncos. For the program’s all time leading tackler, the only thing that was missing from his resume was a state championship. However, the two losses came against the best 5A teams that season. Gullatt is confident that a state championship trophy will return to West Monroe as early as next year.

“I honestly think that the team does not have to change anything from the last couple of years,” Gullatt said. “We did come up short against Landry-Walker and against Zachary, but they just need to put the work ethic in and listen to the coaching staff. The coaches will put them in the right places as this is one of the best high school football coaching staffs in the country. They have the players to contend for a championship next year and there is no reason why they shouldn’t.”

Besides the numbers, Gullatt is part of a team that has won two district championships, a number one seed, a state championship appearance, a semi-final appearance, and a combined record of 25-3-1. However, looking past the awards and the wins, it was the brotherhood that Gullatt will always remember about his high school years.

“I am going to miss the brotherhood that I have with all the players,” Gullatt said. “For these past two years, this has been the tightest group of people that I have ever been with. I am just going to miss hanging around those guys and getting really close to him.”

With his Rebel football career now over, Gullatt shifted his attention to what school he will be attending for the next four years. Showing both his football abilities and his grades, he has been offered by many prestigious schools including Army, Navy, Air Force, Harvard, Yale, Columbia, and Cornell among others, but it was the Black Knights that have attracted him the most. After a in-house visit from Head Coach Jeff Monken and fullbacks coach Mike Viti, Gullatt signs to play for Army.

“Playing at Army and serving my country was always something that I wanted to do,” Gullatt said. “Just seeing the campus and looking at the culture made me want to go there. It is an opportunity for me to play at the highest level. This is a team that has won ten games last season along with their bowl game and they ended up in the top 30 because of it. I am looking forward for that challenge to help take the team to the next level.”

Gullatt has had many blessings in his life and without these people, he would not be here today.

“There is too many people to thank as I have had a lot of help along the way,” Gullatt said. “It is going to be very hard to narrow it down to just a few people, but guys like Coach Sanders and Coach Arledge along with my trainer Coach Carlisle, who is a basketball coach that put me through a lot of workouts.”

Gullatt is excited to get back to work and is already looking ahead to next football season.

“I am going to buy into the program,” he said. “I am going to work as hard as anybody else is if not harder. I am going to give it my all for sure, and hopefully, I will be making a difference early.”

John Bailey Gullatt is a great student, leader, football player, and most importantly a great person who is willing to fight for this country. He is a special type of player who is hard nosed and has high football I.Q. For the Army football team, they are getting somebody who matches perfectly with what they do.