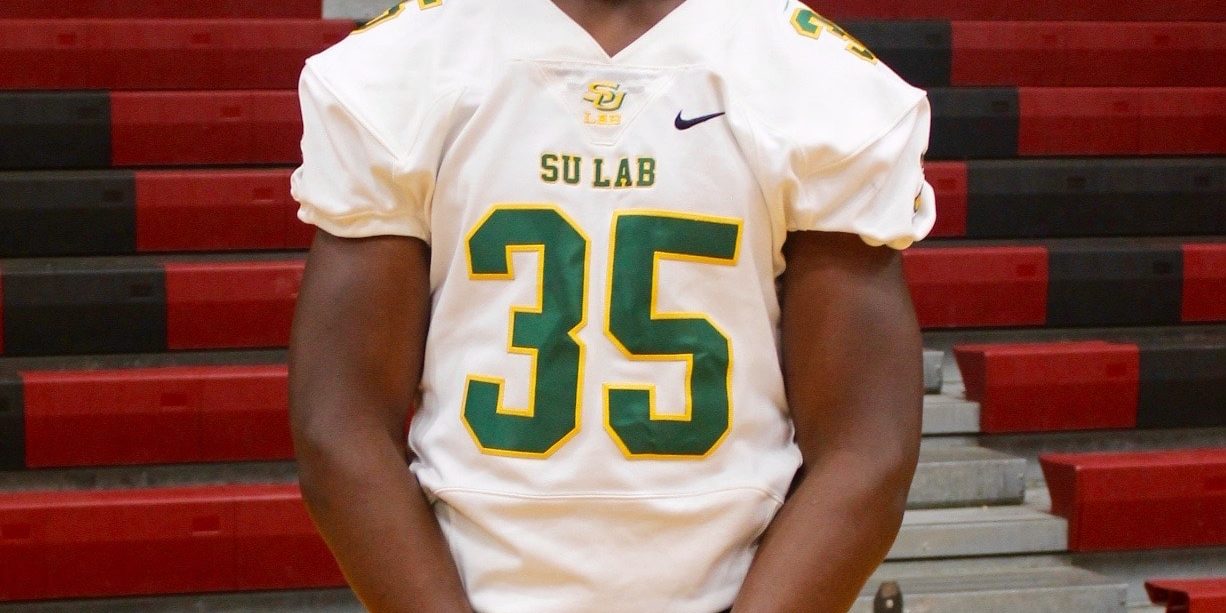 Southern Lab senior LB Damone Clark is one of the best high school prospects in the state of Louisiana this season. Clark is rated as the #7 best player in the state and #18 best linebacker in the nation according to Rivals. On the field, Clark has had as great a football career as it can get. He has had over 100 total tackles, two state championships, and plenty of awards and recognition, but it was not always easy for the four star linebacker as he had to go through a lot of adversity. However, he is thankful and gracious for being where he is today because he knows where he came from.

“Where I am right now, I never thought that I would be here,” Clark said. “Coming from New Orleans and being affected by Hurricane Katrina, we had to move and find a place to stay. I was young at the time and I was going from school to school and then, I found Southern Lab. It soon became my home.”

Clark did find his home indeed at Southern Lab both in the classroom and especially on the football field. In the classroom, Clark was one of the top students in his grade and in his senior year, he posted a 4.2 GPA. On the football field, he got to play for one of the biggest football powerhouses in the entire state of Louisiana especially at the 1A level in the Southern Lab Kittens. The Kittens won back to back state championships in 2015 and 2016. For Clark, playing in those big state championships in the Superdome was a dream come true considering that he has watched the Saints play in the Superdome for most of his life.

“It was an amazing experience,” Clark said. “Sometimes, I just reflect on those moments and experiences. It was really special for me because I went to a lot of Saints games when I was younger since I was from New Orleans and to play in the same stadium that they played in was an incredible time for me.”

After back to back state championships, the Kittens were the heavy favorite to go back to the Superdome for the third consecutive season. Even though the Kittens won’t have both Christopher Allen, who later signed with Alabama, and Damone Clark, Clark would come back to become the main leader on the defensive side of the football. Clark was ready to take on that role as Allen gave him some great advice on how to approach his senior season as the star defensive player of the team.

“Chris showed me everything that I needed to know for my senior year and for college,” Clark said. “This year, I had to be the focal point as the last couple of years, it was Chris. He showed me how to be a leader and how to really improve on my game.”

With Clark on defense and other talented junior players such as OG Kardell Thomas and RB Tyrion Davis, the sky was the limit under Head Coach Marcus Randall.  However, things took a heavy turn really quickly just a few weeks before the 2017 season would start. The LHSAA found multiple recruiting violations under Marcus Randall’s watch. As a result, the school not only fired the former LSU quarterback as the Kitten’s head coach, but the LHSAA also vacated the team’s past two state championships and were also banned for competing for a state championship in 2017 and 2018. It was the Death Penalty of Louisiana High School football and as an upcoming senior that was going to take over the leadership role, it was really hard for Clark to handle the news that everything that they worked for has been taken away from them.

“The question that just came running to my mind was why,” Clark said. “Why did it have to be my senior year? Everybody was asking themselves that question including the younger guys who were saying why us.”

As hard as it has been for Clark to go through the season realizing that the team could have given up on the season as it had nothing to play for, but being the leader of the football team, Clark used his experiences growing up as well as strong advice from former players like Christopher Allen and Coach Randall to make the season worth playing for. As a result, the Kittens became stronger as a team as the season went on.

“We came together as a team,” Clark said. “All the negativity against us actually motivated us even more as far as coming together as well as myself stepping up trying to be a leader of this football team. We knew it was going to be a rough season, but it allowed us to grow as not only players, but young men as well. It really helped us prepare for the real world. In life, a lot of things are not fair and a lot of people don’t like to see you win, but you just have to go through it and prove people wrong.”

Playing a very tough schedule against state championship caliber programs like Parkview Baptist, Riverside Academy, and U-High, the Kittens did manage to post a 5-5 record. The sanctions did not prevent Clark from bringing his A game as he had the best season of his high school career posting 90 tackles and getting to the quarterback 11 times. Clark was also recognized as 1st Team All-State, All-District, and All-Metro. While playing for the Kittens, the 6-3, 220 pound linebacker received plenty of big time offers from powerhouse DI schools such as Texas, Texas A&M, Michigan, Stanford, and Miami just to name a few, there was only one school that Clark stuck with through the entire process and that school was not far by. That school was none other than LSU.

“LSU was home to me,” Clark said. “I felt really comfortable there. I do admit that there were a lot of colleges coming down to me, and I just remain humble throughout the entire process and remained patient. I allowed all the coaches and schools to come by and see what I can do through the team and as far as the decision I was going to make, I have been praying and I just let God guide me to make the right decision. He revealed to me that was the school I was supposed to go to.”

On the first national signing day period, Clark signed with the LSU Tigers to continue his football career. For the Tigers, it was another big time linebacker that the Tigers have signed over the last two seasons to continue to add depth. Clark was heavily recruited by LSU defensive coordinator Dave Aranda. Clark is excited for the opportunity to play for one of the most respected defensive coordinators in the entire country.

Louisiana Football Magazine’s recruit expert Lee Brecheen has seen Clark play many times over the years and as a result, he put Clark on the cover of our South Louisiana Magazine cover and put him as well as our All-South Louisiana team. Brecheen feels that the most scary part of Clark’s game is that he is only going to to get better.

“Damone Clark is going to be a phenomenal linebacker,” Brecheen said. “He looks the part more now as he has grown to his 6-3 frame. I think he will dominate the competition and can become a better player than his former teammate Christopher Allen.”

What sets Clark apart from a lot of players is how humble he really is and that with all the athletic ability he has, he still has a lot to improve before he can make his mark for the Bayou Bengals, but he is ready to help the team any way he can.

“I am a hard working person,” Clark said. “Anything I say, I can back up. I will never stop improving my game until I am at the next level.”

Clark went on to say that he is going to prepare more than anybody else because he knows that’s what it takes to be successful. Clark is anything a coach would want for a player. Not only he has the natural ability in the world, but he is a great leader who is humble about where he is at and the gifts that he has. Clark may not brag about himself too much, but when he does talk, he always backs it up. Hopefully, for Tiger fans, he will do a lot more talking.