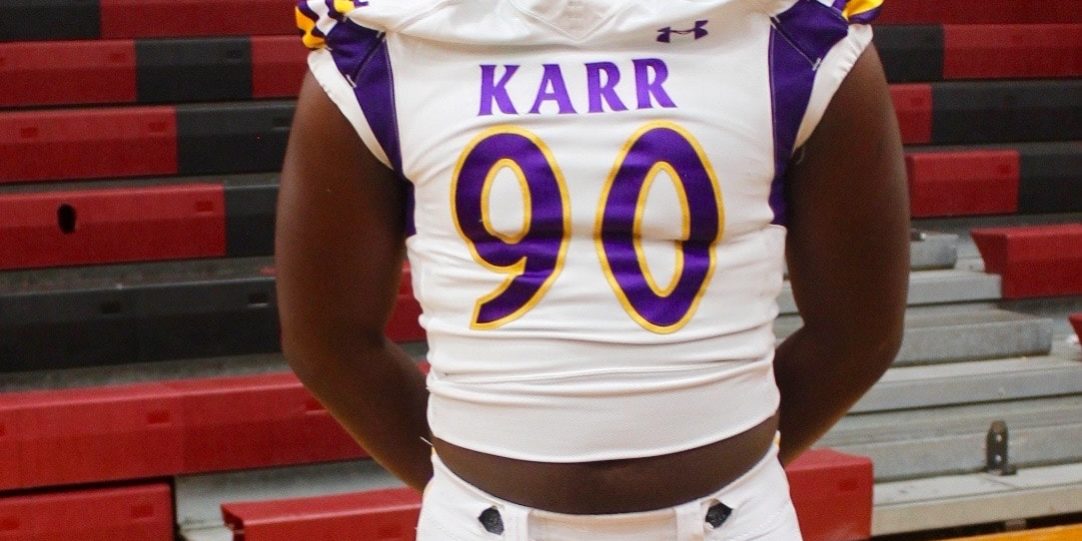 The saying goes that defense wins championships and that is exactly what the Edna Karr Cougars proved this past season. The Cougars showed why they had the best front four in the entire state in their state championship run terrorizing opposing offenses and quarterbacks, but the group saved their best performance for last going up against one of the top offenses in Lakeshore, led by Chris Penton, who was the New Orleans’ metro leading passer at the end of the season. In the Class 4A state championship game, the Cougars’ defensive line made sure that Penton would not beat their defense as they continued to get to the senior Titans quarterback time and time again. All together as a unit, the defense sacked Penton a LHSAA Prep Classic record eleven times during that game and that also does not include the number of times they were able to hit him before he threw the ball away. The main leader on the front seven, who was responsible for two of those eleven sacks, was Edna Karr senior DT Ronell Burbank. Edna Karr senior QB Skyler Perry won the most valuable player award and deservingly so, but it was the efforts of guys such as Burbank, DT Terrance Casey-Charles, LB Kenneth Lebeau, LB Sheldon Celestine, DE Jamier Jackson, DT Austin Kent, and DE Myron Green that helped Edna Karr dominate in its second straight state championship victory 48-26. As one of the leaders of the defense, Burbank knew that he and the rest of the group had to step up big and dominate in order to bring home back to back state championships for the first time in school history.

“We were a young group that played on a roll our junior year,” Burbank said. “We had to look each other in the eyes and say let’s make history going back to back so we buckled our helmets and got in the workshop and made it happen.”

Even with a lot of talent and depth coming back heading towards this season, the Cougars had to replace over ten players that ended up signing with colleges last season most notably QB Aldon Clark (Arkansas State) and WR Racey McMath (LSU). However, the Cougars blocked the noise and continued to dominate on all three phases of the game winning 14 games along with the program’s fourth state championship. According to Burbank, Head Coach Brice Brown did a fantastic job of not allowing the team to get too high or too low.

“I mean our head coach Brice Brown always told us to remain humble and not drink the Kool Aid,” Burbank said. “We just got in the weight room and on the field. The more we were doubted, the more it fueled us into making history.”

“That is a tough one,” Burbank said. “They were both dominant teams as we only lost one game in two seasons, but I would have to go with this year’s team to beat the 2016 team.”

Everybody has their own opinion, but nobody will argue that both of those teams will go down as two of the most dominant in Louisiana high school football history. Burbank was one of those dominant players that had a huge part in making those state championship runs happen. In 2016, Burbank had 26 tackles, six sacks and 15 tackles for loss to help seal the Cougars’ undefeated season. However, it was his senior season in which Burbank really made a name for himself as he was named first team All-Metro, All-District, and even All-State posting single season high numbers with 48 tackles, nine sacks, 20 tackles for a loss, three forced fumbles, two blocked PATs, one blocked punt, and four pass break ups. Burbank was a beast doing a little bit of everything at his defensive tackle position whether it was sacking the quarterback, making plays in the running game, or even affecting special teams. At 6-3, 255, Burbank has enough size to play inside as well as 4.7/40 speed to play as a pass rusher. Louisiana Football Magazine’s recruit expert Lee Brecheen saw a complete improvement in Burbank for the 2017 season and at this rate, he is well on his way to a great college career.

“Ronnell Burbank is a completely improved player from 2016 to 2017,” Brecheen said. “He is so much quicker and stronger off the edge. He is also playing with a lot of bite as well. He is going to be a future star.”

Burbank’s incredible 2017 season combined with his freakish athletic ability attracted numerous colleges as he has been offered from schools such as Southern, Houston Baptist, Idaho, Jackson State, and Eastern Illinois just to name a few, but the three star defensive lineman knew from the start of the season that he wanted to take his talents to the Southland Conference to play for Lance Guidry and the McNeese State Cowboys, who have been with him since the start of his football career.

“McNeese Showed a tremendous amount of love and dedication in recruiting me,” Burbank said. “They had their foot on the pedal my whole junior and senior season. I concluded to sign with McNeese in June going into my senior season.”

As a two time state champion, Burbank wants to continue his winning ways and help the Cowboys win a couple of conference and national championships.

“After visiting the coaches and the returning players on my official visit, I was ready to just stay in Lake Charles,” Burbank said. “I just want to get McNeese back on the map and get this jewelry.”

Even though he will not get the chance to help the Cougars out with competing for a three peat, he gave the younger plays some advice on how to approach the season.

For Burbank, he had to overcome adversity just like everyone else has to do in life, but with people that you love and care for, it makes everything easier.

“First, I want to thank the Lord himself, then my parents for bringing me on this Earth, and finally, I want to thank my coaches and teammates for their support over the years,” Burbank said.

Even with all of the tackles, sacks, big plays, and state championships, there is one major aspect about Edna Karr that he is going to miss the most and that is the team’s pregame entrance “The Rock.” It was some great times for the senior Edna Karr defensive tackle, but now, he is shifting his focus to not only playing at McNeese State, but also pursuing his dreams after football is done.

However right now, Burbank wants to make great art on the field for the Cowboys with his speed, high motor, and his will to win. He is continuing to improve on the areas the Brecheen said earlier in the article and is hoping to be a big impact player that everybody comes to see just like his football idol Jadeveon Clowney (South Carolina/Houston Texans).

“Fans will come to McNeese State games for a show,” Burbank said. “When #90 touches the field, you will get exactly what you came for.”

Burbank has the athleticism, confidence, motor, and the ability to close big games out with forced turnovers. Not only they are getting a great player, but somebody that knows what it takes to win the big games. No matter what the program is, having a player that knows how to win is crucial for any team.