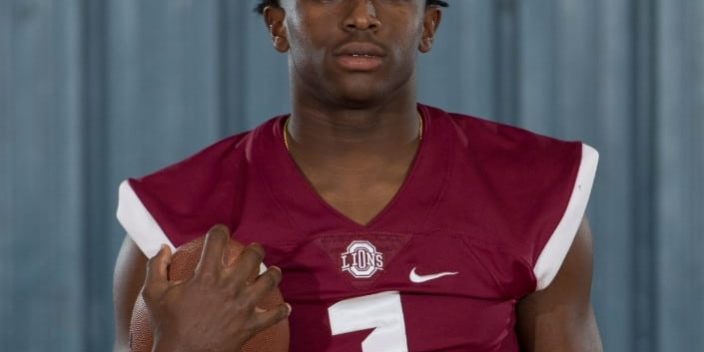 Heading into this season, the Ouachita Parish Lions had to replace one of their best players in program history in De’Vion Warren, who was a star quarterback for the Lions accounting for 5,638 yards and 75 touchdowns and is now making the transition to playing wide receiver for the Arkansas Razorbacks. Warren was a great athlete that could beat you with his arm and his legs. Even though the Lions were replacing a program great, the offense had no problem adjusting as they put their best athlete under center for the 2017 season. That player was none other than CB Jabari Johnson. Over his high school career, Johnson was doing most of his damage in the secondary as a three year starter heading into the season. After having success at defensive back, Johnson had to make the adjustment to bring his athletic ability to the quarterback position. Obviously, Johnson had to adjust in the beginning, but once he got more reps, he became more comfortable and once he was comfortable, he showed how dangerous he was on the offensive side of the football. In today’s world, there are not a lot of star players, especially at the 5A level, that can or would play on both sides of the football, but Johnson did whatever his team asked him to do. Offensively, Johnson strived as the full time starting signal caller earning All-District honors accounting for 2,390 yards (1,545 passing, 845 rushing) and 32 touchdowns. Throughout the season, he showed that he could beat defenses throwing and running the football just like Warren. Defensively, opposing offenses did not want to throw towards Johnson’s way too often, but he still had 45 tackles, two interceptions, and four pass breakups on the defensive side of the football. Louisiana Football Magazine’s recruit expert Lee Brecheen had very high praise for Johnson before the season started as he put Johnson on the cover of our North Louisiana Magazine as well as on our All-North Louisiana team.

“Jabari Johnson is one of the best players in Monroe that people have never heard of,” Brecheen said. “He is a big hitter and a gifted football player.”

Brecheen is still very high on the senior athlete as well as his local college the University of Louisiana Monroe. The Warhawks were the first school to offer the ball hawking defensive back and even though other DI schools such as Tulane and Memphis offered him, but in the end, he has already made his decision to attend Louisiana Monroe to continue his football career as he has signed his letter of intent. The Warhawks are getting a guy that could be playing a lot of significant time next season as he is a versatile defensive back that could either be plugged at safety or defensive back and his experience playing quarterback will also help him in the long run as far as reading the quarterback as well as coverages. When it is all said and done, Johnson could end up having a special career at ULM. In today’s signee spotlight, I caught up with the ULM signee as he talked about signing with the Warhawks, his transition playing quarterback, his high school career, the player he models himself after, and so much more!

LAFM: What are your stats and accomplishments while at Ouachita Parish?

This past season, I received 1st Team All-NELA, 1st Team All-District, and All-State Honorable Mention. As a defensive back, I had 45 tackles, two interceptions, and four pass breakups. As a quarterback, I had 2,390 total yards and 32 touchdowns.

LAFM: You have signed with ULM in the early signing period. What helped play in the decision for you to make to sign with ULM before the second signing period?

First of all, they were the first school to show any interests in me and offer me. They have been on with me since day one. I also built a great relationship with the coaches as well.

I just don’t think that there is anybody more competitive than me, and I just do whatever it takes to make a play happen.

I need to work on my speed and how I cover the field.

If there is one player that I had to model my game after, I would have to say Jalen Ramsey (Florida State/Jacksonville Jaguars). I like how he is cocky and he feels that there is nobody better than him. He just goes out and makes plays.

LAFM: This past season was an up and down one as the team went to the second round of the Class 5A playoffs losing in a close game to Covington 35-28. Still, the team had to play in a very tough district as well as a tough non district schedule. What were your thoughts on this past season as a whole?

If I had to go back, I would definitely do it all over again. It was just a great experience and I haven’t experienced anything like it. I just enjoyed every day of it not just the games, but the practices as well. We had a great team and we just clicked for the entire season.

I would say the game that sticks out to me the most is actually the Covington game. In our first jamboree of the season, I went 0 for 4 as the quarterback. I got my yards running the football in that game. In my last game, I finished throwing for 256 yards and four touchdowns.

LAFM: Like you just mentioned, you progressed as a quarterback as the season went along coming from the start of the season when you did not complete a pass all the way to the end of the season where you threw for over 250 yards and four touchdowns. What helped you gain confidence as the signal caller and go through that transition?

I want to give credit to my offensive coordinator Coach Davis. He helped mold me to become the quarterback that I was that season.

LAFM: A lot of people know you for the type of football player that you are, but what are you like when you are not lining up in a helmet and shoulder pads?

I really just like to work out and play the game. That’s all I really want to do.

LAFM: Before the season started, you were named to our All-North Louisiana team and were also on the cover of our North Louisiana magazine. What does it mean for you to be recognized as one of the best players in a great football state like Louisiana?

It is really a blessing and it has me for a loss of words of how big of an accomplishment that really is.

Enjoy it because it does go by really fast.

I want to thank God, my Mom, my family, and everybody that has been around me.

LAFM: Who are some of your teammates that you would like to give a shout out to?

First off, I want to give a shout out to my cousin Josh Newton as well as the rest of my senior teammates and everybody else that was part of the team this season.

LAFM: You play many different positions as you are a really good athlete but what position will you be playing at ULM and how does your versatility help you even more as far as getting plenty of playing time early next season?

I will either be playing cornerback or safety, but we will work it out when I get there. I would like to play cornerback, but I would play wherever my coaches tell me to play and I believe my versatility as a football player will help that.

I am going to miss the bond, the team, and the way that we handled our business on the football field.

LAFM: For the ULM football fans, what should they expect out of you once you arrive on campus?

They will be getting a great person, a great student, and the best football player that I can become.