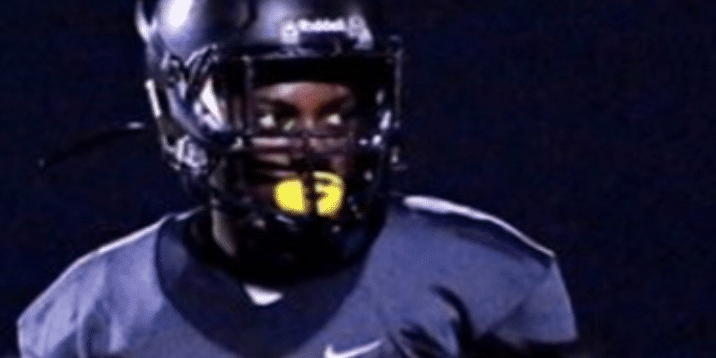 “Kelvin Joseph was a player that I looked up to when I was a freshman,” Grigsby said. “He got all the accolades and offers. I just looked up to him because I played the position he plays. I wanted to go out and do everything he did because he was that guy when he was there.”

Grigsby continues to look up to the former five star recruit for advice on how to handle the recruiting process.

“We still talk a lot,” Grigsby said. “He is always leading me to the right direction and just wants the best for me. If I have a question, I would text him. He has been there for me a lot.”

Although Grigsby leans on Joseph for support, Grigsby started to make his own name after a standout junior season in which recruiting started to pick up.

“I didn’t receive my first offer until the end of my junior year in January,” Grigsby said. “Then, a lot of schools started to offer me. I would get a Big 10 offer, and then an ACC offer. The recruiting started to really pick up.”

In just a span of a couple of months, it seemed that the 6-0, 190 pound Scotlandville defensive back was receiving offers from just about everywhere including the likes of Miami, Purdue, Arkansas State, Tulane, South Alabama, Houston, Southern, Louisiana Tech, Auburn, Vanderbilt, SMU, Michigan State, ULL, Indiana, Louisville, McNeese State, and Western Kentucky. It was the 2019 season that impressed so many colleges of Grigsby as he had 66 tackles, four fumble recoveries, a forced fumble, and an interception for a touchdown. Despite the success on the field along with the surplus of colleges, the three star recruit from Scotlandville believes that this is only the start of what he can really do.

“I would probably give myself an A minus last season because I improved a lot my sophomore season,” Grigsby said. “My sophomore year was the first year just playing on defense. I think it is a good thing that I got going on in getting better every year.”

That is a scary sight to see for opposing offenses as Grigsby is just starting to play on defense after playing strictly on offense his first couple of seasons. However, it is what he has learned on the offensive side of the football that has made it smooth for him to transition to the other side of the football.

“I started out as a running back and then I switched to wide receiver and quarterback when I got to middle school,” Grigsby said. “In my freshman year, I moved back to receiver. We got a new coach my sophomore year and he moved me to playing on defense. I learned a lot of what offensive players’ reads are and what they really do. I can also take advantage of disguising coverages whether it would be Cover 1, Cover 2, and change it to a different coverage. Hopefully, force the quarterback to make a mistake and would allow me to get an interception.”

It obviously turned out to be a great move by head coach Lester Ricard to make Grigsby play a different position, but for the star Scotlandville athlete, he saw it as a chance to improve on his biggest asset, which is his versatility.

“I would say I am versatile,” Grigsby said. “In my sophomore season, I played strong safety and played in the box a lot. In my junior year, I was able to play in the nickel as well as at free and strong safety as well.”

Coach Ricard not only made a big impact on the versatile defender on the field, but also gave him some insight on how seriously to take the recruiting process since he was also once a highly recruited player coming from Amite HIgh School.

“He basically has told me to stay humble, go to a college that will help you with your education over the next four years” Grigsby said. “It’s not only a four year decision, but it is also a 40 year decision. Also, don’t go to that college because of the name, but go there to make a name for yourself and have an education for your family.”

With over 16 scholarship offers, it was not going to be an easy decision of where to go for Grigsby, but he has taken his head coach’s advice and has committed to the best school for him, which is Michigan State.

“Coach Hank (Cordae Hankton) has been recruiting me the most and he is from New Orleans,” Grigsby said. “Being 45 minutes away from New Orleans, I would always go to the Bayou Classic and Mardi Gras so just having him and other coaches that are at Michigan State, but are from Louisiana makes it easier for me to talk with them.”

Grigsby has big plans in the future at Michigan State, but his current goals are to lead the Hornets to a big playoff run because of the talent that is on the roster and to also win District Defensive MVP honors. However, he wants to make sure that the Spartans will be getting a lot of Louisiana flavor for the Michigan State Spartans of the Big 10 Conference.

“We have a swagger here down south in Louisiana,” Grigsby said. “I am going to bring some good talent from down here to up there so I can help continue the team’s winning culture.”

Jah’Von Grigsby is one of the best football players in the state as he is ranked in the state’s top 20 prospects and is in the top five best at his position in the state. However, Grigsby is not only a rising football players, but he is a man of many talents. For starters, he is a track star that runs three different events. He also wants to go into engineering, speaks fluent Spanish, and loves mixing music. This is a promising young player with plenty of talents and will be emerging as a star no matter what field, especially the game of football.

Click the link below to check out Jah’Von Grigsby’s junior highlights: