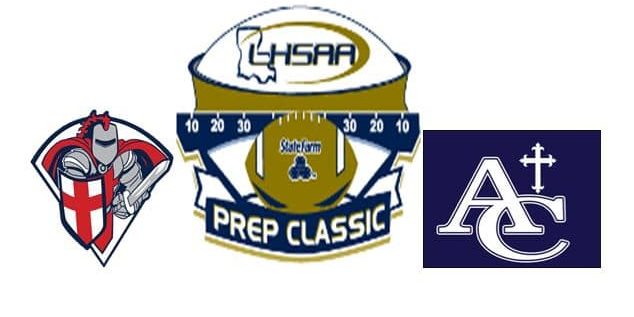 Well, here we are. We have reached the final destination when it comes to the Road to the Dome. 16 teams had one goal in mind and that goal is to be one of nine teams in the end holding a state championship trophy in the Mercedes-Benz Superdome with the Queen smash hit “We Are the Champions” playing in the background. Now, 14 teams’ seasons are over and there are only now only two teams standing. Both teams had a long journey to get to this point, but now, only one team will get the taste of sweet victory while the other team will suffer the agony of defeat. The Louisiana high school football stage does not get any brighter than this. A weekend filled with great championship matchups kicks off this Thursday and the games will conclude on Saturday. The second game, on Thursday, will be the Division IV state championship game, which will feature the two best private school 1A football teams in the state. In this game, the Lafayette Christian Knights will face the Ascension Catholic Bulldogs. Both of these teams have shown that they have what it takes to win the state championship, but which of the two teams will be able to get the win in the end? Well, Louisiana Football Magazine’s expert Lee Brecheen has seen all of these teams play and gives his insight on which team will win the Division IV state championship. This week, we will get you all covered in what you need to know for the Division IV state championship game.

Lafayette Christian’s Road to the Dome: 34-12 win over Covenant Christian in first round;  21-10 win over Catholic-Pointe Coupee in the quarterfinals; 30-28 win over Vermilion Catholic in semi-finals

Lafayette Christian Team Preview: The Lafayette Christian Knights were on a tear at the beginning of the season led by former LSU linebacker Trev Faulk as their head coach. The Knights outscored their first seven opponents 349-39. However, in the district championship matchup against Vermilion Catholic, star quarterback Zachary Clement suffered a season ending injury in that game which helped Vermilion Catholic clinch the division and the number one seed. Their star running back Trey Breaux also was sidelined with injury prior to the Vermilion Catholic game. Even though the Knights lost their star playmaking quarterback, the Knights still have a lot of weapons at their arsenal and other players had to step up. Coach Faulk has done  a great job of getting his team focused after the Vermilion Catholic game and the team started to play in the dominant way they have been winning football games since the district championship. Now, the Knights are on a five game winning streak. Players had to move to other  positions in order for the team to be successful and they have done a great job of adjusting. WR Errol Rogers Jr. moved from his normal spot to playing quarterback while Logan Gabriel moved from defensive end/linebacker to running back. As a result, Gabriel has been one of the hottest runners around with over 600 yards rushing and 10 touchdowns over the last couple of weeks. The Knights also got some good news when their star running back Trey Breaux has returned from injury to split the carries with Gabriel to make a one-two punch at running back. Other players have shown that they could play multiple positions as Faulk also moved two of his defensive linemen to linebacker and has moved two of his defensive backs to linebacker. Guys like OLB/SS Jaylen Dauphin, DB Tahj Gallien, DT Connor Thibodeaux, DE Bear Lyons, CB Carrington Hall, SS Martin Lee, and FS Nicholas Picard lead a really good defensive unit that may be undersized but play really well as a unit. The Knights had their chance at revenge against Vermilion Catholic last week for a trip to the Superdome and they got the win with a come from behind victory which was capped off by their kicker Colin Lahaye. Now, the Knights will be making their first state championship game in the Superdome in program history and will be searching for their first state championship game in the process.

Ascension Catholic’s Road to the Dome: 63-7 win over Houma Christian in first round; 21-0 win over St. Edmund in quarterfinals; 35-21 win over St. Mary’s in semi-finals

Ascension Catholic Team Preview: The Ascension Catholic Bulldogs, led by Drey Trosclair, are making the Superdome for the first time since 1992 when they take on the Knights this Friday. The Knights have a great one-two rushing attack with Gabriel and Breaux, but still, it does not beat the one-two running back punch for the Bulldogs that features Jamar Barber and Jai Williams, who is the son of legendary Ascension Catholic runner and former LSU Tiger Germaine “the Juice” Williams. This duo has been very hard to stop all season long as this has been a key reason why the Bulldogs have gone this far this season. There is not really a guy that gets more carries than the other as this really puts the opposing defense on its toes. This season, Barber has ran for 1,643 yards and 16 touchdowns on 158 carries while Williams has ran for 1,628 yards and 21 touchdowns on 155 carries. Both runners average over 10 yards per carry when they run the football and what is even scarier is that the Bulldogs get both of these runners together for one more season next year. Still, it is a team game and even though both running backs have been major keys for the Bulldogs, the offensive line has shown that it is one of the best in this bracket. Guys such as OT Dillion Davis, who is one of the best linemen in the Baton Rouge area, OT Nick Hilliard, center Jacob Matirne, OG Robert Lemann, and OG Charlie Gianelloni. Three of the five linemen are over 240 pounds. The Bulldogs not only rotate at running back, but at quarterback as well with Bubba Gautreau and John Mire. Gautreau is a big physical player that can run the football and be critical in short yardage plays while Mire is more of the throwing quarterback. They have experienced and reliable receivers on the outside in Rodney Blanchard and Mason Zeringue. This is a team that is one of the most talented in 1A and has played in arguably the toughest district in all of the classification with other teams such as Southern Lab and Kentwood also in the district. The Bulldogs will be looking for the program’s fourth state championship and their first since 25 seasons ago.

Jace’s Pick: “I have to say what an amazing job Coach Faulk and his team have done this year battling through the adversity of losing some of their best players throughout the season especially their quarterback Zachary Clement and I am really glad that they have made it to this point, but I thought the winner of the Ascension Catholic-St. Mary’s semi-final game was going to win the state championship and I think Ascension Catholic is the team to do it. I am excited to see this game because both teams have two really good running backs, but I think Ascension Catholic’s size on the offensive line will be the difference in this football game so I am going to have to go with the Bulldogs to win the Division IV state championship.”