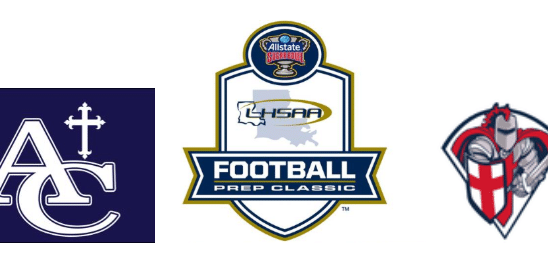 Well, here we are. We have reached the final destination when it comes to the Road to the Dome. 16 teams had one goal in mind and that goal is to be one of nine teams in the end holding a state championship trophy in the Mercedes-Benz Superdome with the Queen smash hit “We Are the Champions” playing in the background. Now, 14 teams’ seasons are over and there are only now only two teams standing. Both teams had a long journey to get to this point, but now, only one team will get the taste of sweet victory while the other team will suffer the agony of defeat. The Louisiana high school football stage does not get any brighter than this. A weekend filled with great championship matchups kicks off this Thursday and the games will conclude on Saturday. The second game, on Thursday, will be the Division IV state championship game, which will feature the two best private school 1A football teams in the state. In this game, the Lafayette Christian Academy Knights will face the Ascension Catholic Bulldogs. Both of these teams have shown that they have what it takes to win the state championship, but which of the two teams will be able to get the win in the end? Well, Louisiana Football Magazine’s expert Lee Brecheen has seen all of these teams play and gives his insight on which team will win the Division IV state championship. Also, Louisiana Football Magazine staff members Jace LeJeune and Cameron Cerniglia give their insight and predictions on the second title game of the championship game week. This week, we will get you all covered in what you need to know for the Division IV state championship game.

Ascension Catholic’s Road to the Dome: 52-8 win over Hanson Memorial in first round; 66-20 win over Catholic P.C. in quarterfinals; 37-13 win over Vermilion Catholic in semifinals

Lafayette Christian Academy’s Road to the Dome: 70-6 win over Houma Christian in first round; 56-14 win over Opelousas Catholic in quarterfinals; 35-20 win over Southern Lab in semifinals

Jace’s Game Preview: The Lafayette Christian Academy Knights had to get through the extremely talented Southern Lab Kittens in order to get back to the Dome for the second year in a row and they did exactly that with a total team effort. Offensively, senior RB Logan Gabriel was the bellcow rushing for 245 yards and two touchdowns on 21 carries while QB Zachary Clement accounted for two touchdowns. Defensively, the Knights defense did what it needed to do containing LSU commit Tyrion Davis to only 65 yards rushing. Also, the added element for the Knights was the play of its special teams unit. Playmaker Sage Ryan returned a punt 55 yards for a touchdown to add the scoring effort. Now, the Knights will play the Ascension Catholic Bulldogs in a rematch of last year’s Division IV state championship game. The Bulldogs showed their muscle in the running game thanks to the sloppy weather. Junior running back Jai Williams ran for 316 yards on an impressive 40 carries to help pull the team away from the Vermilion Catholic Eagles 37-13. The Bulldogs will be plenty motivated for their Super Dome rematch with the Knights. Last year, the Knights won a defensive 10-0 battle to win the state title. The running back duo of Jai Williams and Jamar Barber has been the key to the Bulldogs’ success after the duo has combined to run for 3,661 yards and 46 touchdowns. Williams and Barber are also motivated to play in the Dome after injuries forced both of them to miss out majority of the game. Lafayette Christian Academy’s well balanced offense led by QB Zachary Clement and a dominant defense will give the Bulldogs all they can handle. Whatever offense can control the time of possession and the line of scrimmage will win this game and based off what the Knights did against the physical running attack of Southern Lab, why not go with the Knights to repeat?

Cameron’s Game Preview: Both of these teams have blown through their side of the bracket in impressive fashion.  In the semifinal round, Lafayette Christian defeated Southern Lab 35-20 and Ascension Catholic defeated Vermilion Catholic 37-13.  Both of these teams have high potent offenses. This will be a high scoring game, and I think it will come down to which defense can make a stop late in the game.