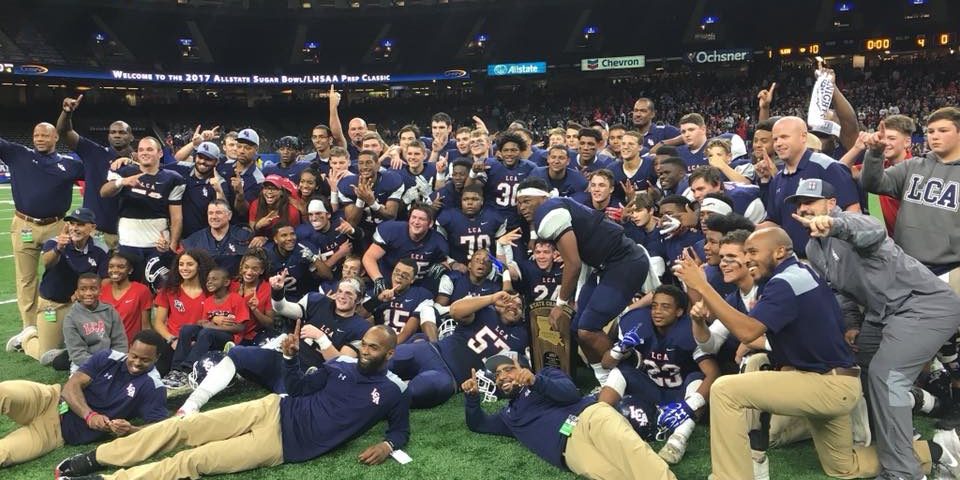 What a great weekend it was for Louisiana high school football fans! Over three days, 18 of the state’s best teams battled it out for the title of being state champions. These teams worked all spring, summer, and fall for a chance for this moment. In the end, nine teams came out as state champions. It was a long journey to the Dome and it was one full of exciting moments as well as ups and downs, but these state championship teams finished the long winding journey on top. Now, the teams come home with a state championship trophy. No matter if these players go on to play collegiate football or if they end their careers at the high school level, these players will not forget what it meant for their team to hold up a state championship trophy. For the teams that lost this weekend, there is nothing to hang their heads about. They got to a point in which a lot of other teams would have dreamed about reaching. Over the course of the week, we will recap each and every game that went down over the weekend. There is still a lot going on in the football world as bowl games will be fixing to start, the NFL regular season is about to come to an end, and there is still a lot of All-Star games that will be going on at the high school level, but we will have to wait until next season to see Friday night football once again. As we wrap up the 2017 Louisiana High School Football season, we will give our analysis of all that went on during the weekend. Today, we will talk about the second game of the LHSAA Prep Classic which was the Division IV State championship game between Lafayette Christian and Ascension Catholic..

Play of the Game: Obviously, the play of the game occurred in the fourth quarter when the game gets interesting. Even with all of the offensive struggles and injuries the Bulldogs had to go through, the game was still a 3-0 game. However, without their two running backs, the Bulldogs had to become one dimensional and that is throw the ball to get back in the game. When a team’s bread and butter is running the football, it is pretty hard to throw the football to get back into the game. The Lafayette Christian ball hawking secondary forced five turnovers, but there was one interception that stood out to mind with just about four minutes left to play in the game. Gautreau threw a pass that sailed over one of the Bulldogs receivers and landed in the arms of Watts who not only intercepted the pass, but brought the interception back for the only touchdown scored in the game to pretty much ice the game away making it a 10-0 game.

Lafayette Christian Player of the Game: The media awarded Lafayette Christian kicker Collin LaHaye as the most valuable player. LaHaye played a integral part in the Knights’ state championship run over the last two games. He hit a game winning field goal to send LCA to the Superdome the previous week and scored what looked to be the game winning score with a 43 yard field goal before the interception return to really ice the game. However, if a whole unit deserved to have the MVP award, it would be the entire defensive unit for Lafayette Christian. Ascension Catholic may have had their injury problems, but regardless, they held a team that was averaging way over 40 points to 0 points. The defense also gave up less than 100 yards of total offense and forced five turnovers including the game winning interception. When the Knights’ offense was struggling, the defense was there to pick up the slack.

Ascension Catholic Player of the Game: Even though Jai Williams only played a half of football, he would have to be the MVP for Ascension Catholic. Williams ran for 87 yards on 15 carries and was the main player on the offensive side of the football that was picking up big runs and first downs for the offense. If it was not for the concussion suffered in the second quarter, who knows how the game would have went, but it was pretty clear that they were missing their star running back in the second half.