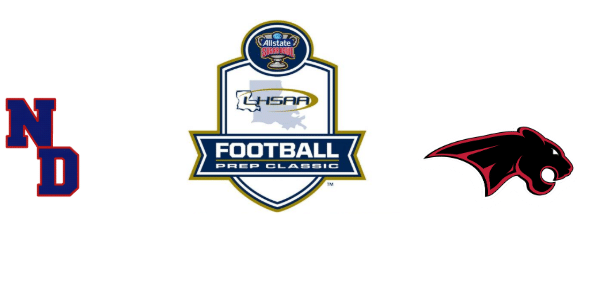 Well, here we are. We have reached the final destination when it comes to the Road to the Dome. 13 teams had one goal in mind and that goal is to be one of nine teams in the end holding a state championship trophy in the Mercedes-Benz Superdome with the Queen smash hit “We Are the Champions” playing in the background. Now, 11 teams’ seasons are over and there are only now only two teams standing. Both teams had a long journey to get to this point, but now, only one team will get the taste of sweet victory while the other team will suffer the agony of defeat. The Louisiana high school football stage does not get any brighter than this. A weekend filled with great championship matchups kicks off this Thursday and the games will conclude on Saturday. The final game on Thursday will be the Division III state championship game, which will feature the two best private school 2A football teams in the state. In this game, the Notre Dame Pioneers will face the Catholic New Iberia Panthers. Both of these teams have shown that they have what it takes to win the state championship, but which of the two teams will be able to get the win in the end? Well, Louisiana Football Magazine’s expert Lee Brecheen has seen all of these teams play and gives his insight on which team will win the Division III state championship. Also, Louisiana Football Magazine staff members Jace LeJeune and Cameron Cerniglia give their insight and predictions on the third title game of the championship game week.  This week, we will get you all covered in what you need to know for the Division III state championship game.

Notre Dame’s Road to the Dome: Bye in first round; 41-0 win over Episcopal in quarterfinals; 48-21 win over Isidore Newman in semifinals

Catholic New Iberia’s Road to the Dome: 48-0 win over St. Thomas Aquinas in first round; 35-7 win over Dunham in quarterfinals; 57-54 win over Metairie Park Country Day in semifinals

Jace’s Game Preview: How many times two teams can play each other in two years? Well, district rivals Notre Dame Pioneers and Catholic New Iberia Panthers will be meeting in the Dome to play against each other after previously having to face each other three times in the last two years including last year’s state championship game. Both teams have plenty of motivation to beat each other. For the Catholic New Iberia Panthers, they were embarrassed in their only loss of the year to the Pioneers losing 49-0. The Pioneers were embarrassed in the state championship game last year losing to the Panthers 33-16. In their semifinal matchups, both teams faced two explosive offenses featuring two great quarterbacks in Isidore Newman’s senior Martin Butcher and Metairie Park Country Day’s junior Justin Ibieta. For the most part, the Pioneers controlled the entire game jumping to an early 14-0 lead and never looked back. The Pios controlled the line of scrimmage on offense with 186 rushing yards and two touchdowns from senior RB Noah Bourgeois. The defense gave up its plays to Butcher and the offense as he threw for over 250 yards and three touchdowns, but in the end, the Pios got it done in all three phases of the game. Meanwhile, the Panthers had a classic against the Cajuns of Metairie Park Country Day in their semifinal game. The game was back and forth as both offenses exchanged scores. Catholic High New Iberia sophomore QB Trenayvian Amos ran for 316 yards and five touchdowns while sophomore RB Trey Henry added another 192 yards and two touchdowns in Coach Brent Indest‘ masterful Wing T offense. The Cajuns put up their points in the air with 482 total yards and four total touchdowns from Ibieta. In the end, it was the Panthers that won the shootout 57-54. This leads up to the state title game. Catholic New Iberia is looking to repeat again as state champions in their third consecutive trip to the Dome while Head Coach Lewis Cook and the Pioneers will be looking for another state championship to put in their trophy case. I think that this will be a great game, but Coach Cook is going to remind this team about last year in the Dome and I think they will be ready to play this game. Thanks to a ball controlled offense that includes three different players with 10 or more touchdowns, a defense that has only allowed 100 points the entire season, and a great special teams led by kicker John William Lamm, I am going to go with the Pioneers in this game.

Cameron’s Game Preview: These two teams met in Week 4 of the regular season and Notre Dame won 49-0. In the playoffs, Notre Dame has been able to roll through their opponents while Catholic-N.I. had to win a close shootout against Metairie Park Country Day. It is tough for a team to beat someone twice in the same year and the bye week will give both teams much needed time to prepare. I think Coach Lewis Cook will use his years of knowledge and experience to have his team prepared and ready to roll.

Lee’s Game Preview: “This is the fourth time that these two teams played in two years. They played in the regular season last year and Notre Dame won. They played in the Dome last year and Catholic N.I. won the state title. This year, Notre Dame won in the regular season. I usually don’t like to use words like payback or revenge, but I think these kids from Notre Dame don’t want to get beat in the state championship game again to somebody they beat earlier in the season. I think Notre Dame wins this game and gives Lewis Cook another state title. Catholic N.I. is a young team that is trying to come on. This will be a great game, but I think Notre Dame will win.”