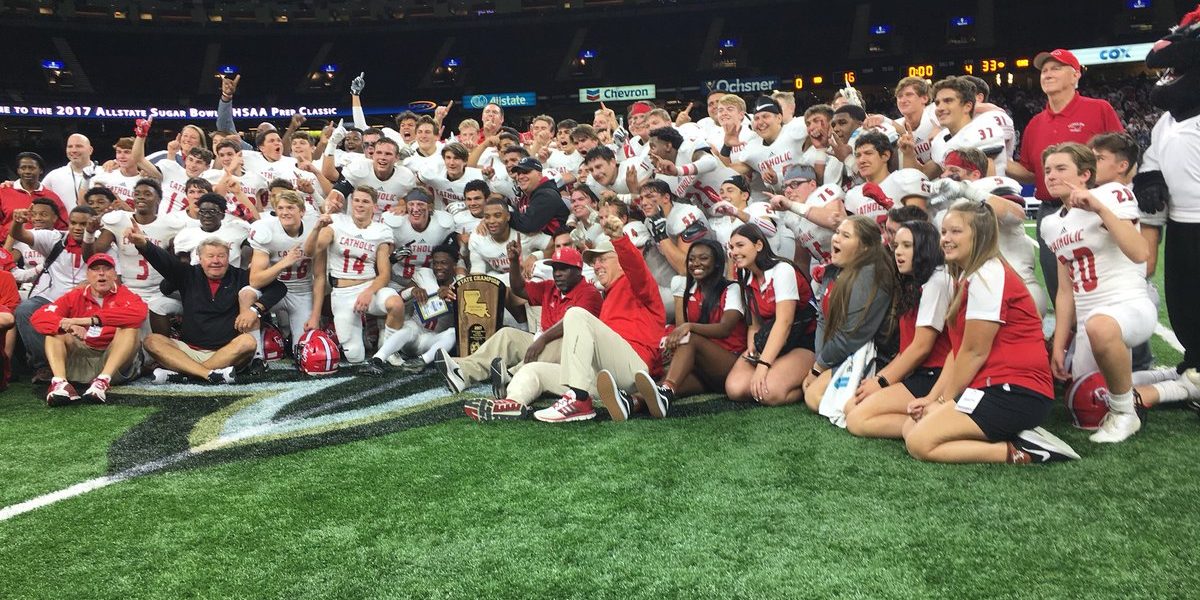 What a great weekend it was for Louisiana high school football fans! Over three days, 18 of the state’s best teams battled it out for the title of being state champions. These teams worked all spring, summer, and fall for a chance for this moment. In the end, nine teams came out as state champions. It was a long journey to the Dome and it was one full of exciting moments as well as ups and downs, but these state championship teams finished the long winding journey on top. Now, the teams come home with a state championship trophy. No matter if these players go on to play collegiate football or if they end their careers at the high school level, these players will not forget what it meant for their team to hold up a state championship trophy. For the teams that lost this weekend, there is nothing to hang their heads about. They got to a point in which a lot of other teams would have dreamed about reaching. Over the course of the week, we will recap each and every game that went down over the weekend. There is still a lot going on in the football world as bowl games will be fixing to start, the NFL regular season is about to come to an end, and there is still a lot of All-Star games that will be going on at the high school level, but we will have to wait until next season to see Friday night football once again. As we wrap up the 2017 Louisiana High School Football season, we will give our analysis of all that went on during the weekend. Today, we will talk about the third game of the LHSAA Prep Classic which was the Division III State championship game between Catholic New Iberia and Notre Dame.

Game Recap: The Division III state championship game featured two Acadiana teams in the Notre Dame Pioneers and the Catholic New Iberia Panthers. The Notre Dame Pioneers have once again made another appearance in the LHSAA Prep Classic under the leadership of Hall of Fame Coach Lewis Cook. The Pioneers made their 12th appearance playing for the state championship. The powerhouse football program has won five state championships while Lewis Cook has won four state championships with three at Notre Dame and one at Crowley. This is a team that is no stranger to playing in this kind of atmosphere. Meanwhile, the Panthers entered the state championship game looking for their first state championship in over 50 years. However, the Panthers did appear in the Division III state championship game just four seasons ago losing to Calvary Baptist 27-24. A lot of the seniors on this year’s Catholic New Iberia team got to experience playing in the Superdome so it was not like the Panthers had no experience playing in the big games. Interestingly enough, both of these teams played one another earlier in the regular season. In that game, it was completely dominated by Notre Dame as the Pioneers shut out the Panthers 37-0 for the Panthers’ only loss of the regular season. A lot of people would have figured that Notre Dame would do much of the same the second time around against Catholic New Iberia in the rematch, but it’s hard to beat a really good team twice especially after you dominated them the first time around. It was pretty evident that the Panthers did not forget the first time both teams played earlier in the season. The Panthers showed why this is one of the hottest offenses in the entire state at the end of the season as the Panthers drove down the field on an eight play 78 yard drive against a really good Notre Dame defense to take the early 7-0 lead. Catholic New Iberia senior RB Ben Landry was able to cap that drive off with an eight yard touchdown run. After the Panther defense forced a three and out, the Panthers hit three explosive plays that includes a 38 yard pass from Diallo Landry to senior WR Cole Lipari and two big runs from their running back Jaden Stokes to put the Panthers inside the one yard line which Landry was able to sneak in to extend the Panthers lead to 13-0. Both teams had a couple of field goals before the end of the first half and the score was 19-3 at the end of the half. Even with a dominant first half for the Panthers, it was still a two possession game. When the Pioneers were just trying to get back in the game, the offense made a crucial mistake in the third quarter with a fumble that gave the ball right back to the Panthers as well as the momentum. Just two plays later, Stokes broke through in the open field for a 50 yard touchdown to make the score 26-3. The Pioneers did respond with their first touchdown of the game from senior RB Waylon Bourgeois to shorten the lead at 26-10, but that was as close as the game was going to get. Both teams added a touchdown late in the game to make the score 33-16, but the Panthers were able to hang on to get their revenge on Notre Dame by winning the game that mattered most. The Panthers, led by Brent Indest, ended one of the longest current state championship droughts as the Panthers won their first state championship since 1962. For the Notre Dame Pioneers, it was not the ending that the team expected, but it was still a great coaching job by Lewis Cook to get this team to the Superdome as it was indeed a relatively young team.

Play of the Game: Well, it really was a sequence of plays that could qualify as the play of the game. It was the third quarter and it was still relatively a game at 19-3, but the Pioneers fumbled the football, which gave the Panthers the ball back. Just two plays later, Stokes was able to do what he does best and that is break long runs. Stokes broke out on a 50 yard touchdown run to make it a three possession game and to shut down any hopes for Notre Dame to come back in the football game.

Catholic New Iberia Player of the Game: There could be plenty of players that could be up for the player of the game. The Catholic New Iberia offense was very impressive against one of the best defenses in the state in the Notre Dame Pioneers as the offense gained 378 total yards of offense and put 33 points on the board. Jaden Stokes and Ben Landry both played big roles as both runners combined for 252 yards and three touchdowns, but the player of the game should go to Diallo Landry. Diallo Landry’s numbers may not have been as impressive compared to the previous couple of games as he only had 135 total yards of offense and one touchdown. However, Landry’s playmaking ability drew the attention of the Pioneer defense and allowed Stokes and Ben Landry to have big games. His ability to beat you with his arm and legs was a big reason in why the Panthers won the state championship.

Notre Dame Player of the Game: It was not a typical Notre Dame performance in the Superdome that we are accustomed to seeing as the running game was almost non-existent and the defense struggled against Catholic New Iberia’s Wing T attack, but the Pioneers did hit plays in the passing game. Notre Dame senior WR Gentry Borill consistently made plays in the passing game and kept the Pios in the football game with 10 receptions for 134 yards.