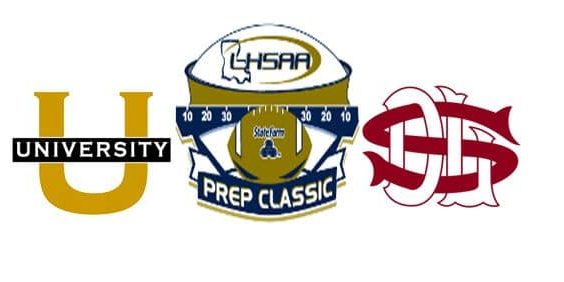 Well, here we are. We have reached the final destination when it comes to the Road to the Dome. 13 teams had one goal in mind and that goal is to be one of nine teams in the end holding a state championship trophy in the Mercedes-Benz Superdome with the Queen smash hit “We Are the Champions” playing in the background. Now, 11 teams’ seasons are over and there are only now only two teams standing. Both teams had a long journey to get to this point, but now, only one team will get the taste of sweet victory while the other team will suffer the agony of defeat. The Louisiana high school football stage does not get any brighter than this. A weekend filled with great championship matchups kicks off this Thursday and the games will conclude on Saturday. The second game tomorrow will be the Division II state championship game, which will feature the two of the best teams in the state regardless of class. In this game, the De La Salle Cavaliers will face the University Lab Cubs. Both of these teams have shown that they have what it takes to win the state championship, but which of the two teams will be able to get the win in the end? Well, Louisiana Football Magazine’s expert Lee Brecheen has seen all of these teams play and gives his insight on which team will win the Division II state championship. This week, we will get you all covered in what you need to know for the Division II state championship game.

De La Salle’s Road to the Dome: Bye in first round; 52-14 win over Archbishop Hannan; 28-14 win over St. Thomas More in semi-finals

De La Salle’s Team Preview: Regardless of classification, the De La Salle Cavaliers, led by Ryan Manale, are considered as one of the best teams in all of Louisiana, and who would argue against that with the way they have been playing. With wins against playoff caliber teams such as Edna Karr, St. Charles Catholic, St. James, Riverside Academy, St. Augustine, Donaldsonville, St. Thomas More, and plenty more, it is safe to say that the De La Salle Cavaliers deserve to play in the Superdome. The Cavaliers also did not have any problems with most of their games as the team has won by 21 points or more in nine of their 11 wins. It has been a great turnaround for Coach Manale and company as this will be the first time that this football program will be playing for a state championship since 1961. The Cavaliers have dominated the opposition by controlling the game and dominating on both lines of scrimmage. Their star quarterback is Julien Gums, who is really a bruising running back at 5-11, 225, has shown that he is the best power running quarterback in the state as he has ran for over 1,100 yards and 15 touchdowns. Gums is not the only player in the offense that can do damage in the running game as running backs Kendall Collins and Ryan Hamrick have become a great one two punch at running back for the Cavaliers. Even though Gums’ strength is his legs, Gums has shown that he can beat you with his arm and his decision making with the football at the same time as he has thrown for over 1,000 yards and 12 touchdowns while only throwing one interception.  When they do throw it, they have excellent receivers in BJ Randle, Aaron Marquez, and Ahmad Munoz. In the trenches, they are really strong with DT Jamiran James, who is a Tulane commit, his brother OT/DT Jeremiah James, OT Donte Lewis, OG Walter Johnson, and center Nick Guthrie. There is also DE Accord Green, who is 6-2, 230, and the nephew of former LSU DE Jarvis Green.  SS Lance Robinson, who is a Kansas State commit, is a big time play maker on the defensive side of the football. There is not a glaring weakness on this football team and as long as they play their style of play, nobody is going to beat this team.

University Lab’s Road to the Dome: Bye in first round; 35-9 win over Teurlings Catholic in quarterfinals; 34-14 win over St. Charles Catholic in semi-finals

University Lab’s Team Preview:  The University Lab Cubs, led by Chad Mahaffey, had an undefeated regular season entering the playoffs. The last time that the Cubs were undefeated, the team won the Division II state championship game in 2014. The Cubs have one of the top offenses in the entire state regardless of classification. QB John Gordon McKernan has done everything that the coaches have asked him to do and is doing a great job of efficiently running the offense. The Cubs have one of the best running backs in the Baton Rouge area in Mike Rollins, who is a powerful runner and a touchdown machine. The junior running back has rushed for an incredible 31 touchdowns and over 1,300 yards. In the passing game, McKernan will look for wideouts such as Christian Harris, Makiya Tongue, and Grant Bonnette, who is the son of LSU SID Michael Bonnette. Up front on the offensive line, the Cubs are strong with guys such as Dylann Rathcke, Ethan Macloud, and Zach Gremillion. This is an offense that can ground and pound when they need to, but can come up with explosive plays at the same time. The defense has also been very good and will be led by a great front seven that features MLB Bryton Constantin, who is almost 230 pounds, OLB Dallas Wright, DT Donald Berniard, LB Leland Jones, and so much more.  In the secondary, the Cubs are really talented as well with guys like Jordan Clark, who happens to be the son of former LSU and NFL cornerback Ryan Clark. Also, don’t forget the Special Teams unit that features Bonnette at punter and Aidan Gale at kicker. Like De La Salle, this is a team that does not have a glaring weakness and has been beating up teams all season long winning all of their games by 19 points or more. The Cubs are in their ninth state championship appearance and will be looking for the program’s fourth state championship.

Lee’s Pick: “University Lab is a great football team, but I feel that the team did not play anybody this season that doesn’t have power. They played a Parkview team that was down with injuries and they played Zachary and Catholic early in the season while they were still trying to figure their teams out. Besides West Feliciana, University Lab has the most explosive offense in the state. However, defensively, De La Salle is powerful. I think Gums is unstoppable on offense. The only way I really see University Lab winning is if De La Salle turns the ball over on these long drives. De La Salle will try and play keep away from McKernan, Harris, Rollins, and the rest of the U-High offense and I think that they will do that.”

Jace’s Pick: “This is the best matchup out of all the state championship games this weekend. This will be the first time that two undefeated teams will compete for the state championship in Division II. Both teams are arguably the two best teams in the entire state as there is talent lined up at every position for both teams. Both teams have not been really challenged this season so it will be interesting to see how both teams deal with adversity during the course of this game. I think the biggest difference is De La Salle and their ball control offense. If the Cavaliers are able to go down the field and have time consuming drives, they will win the football game. It should be a great game and one of the best that you will see this weekend, but I have the Cavaliers winning it all.”