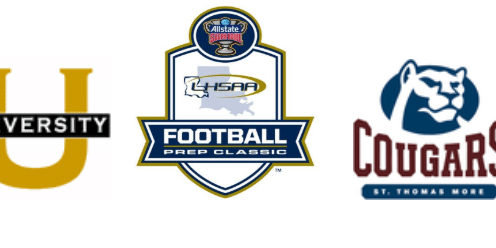 Well, here we are. We have reached the final destination when it comes to the Road to the Dome. 13 teams had one goal in mind and that goal is to be one of nine teams in the end holding a state championship trophy in the Mercedes-Benz Superdome with the Queen smash hit “We Are the Champions” playing in the background. Now, 11 teams’ seasons are over and there are only now only two teams standing. Both teams had a long journey to get to this point, but now, only one team will get the taste of sweet victory while the other team will suffer the agony of defeat. The Louisiana high school football stage does not get any brighter than this. A weekend filled with great championship matchups kicks off this Thursday and the games will conclude on Saturday. The second game on Friday will be the Division II state championship game, which will feature the two best 3A/4A private football teams in the state. In this game, the University Lab Cubs will face the St. Thomas More Cougars. Both of these teams have shown that they have what it takes to win the state championship, but which of the two teams will be able to get the win in the end? Well, Louisiana Football Magazine’s expert Lee Brecheen has seen all of these teams play and gives his insight on which team will win the Division II state championship. Also, Louisiana Football Magazine staff members Jace LeJeune and Cameron Cerniglia give their insight and predictions on the fifth title game of the championship game week. This week, we will get you all covered in what you need to know for the Division II state championship game.

University Lab’s Road to the Dome: Bye in first round; 48-14 win over St. Louis Catholic in quarterfinals; 43-14 win over De La Salle in semifinals

St. Thomas More’s Road to the Dome: Bye in first round; 63-7 win over E.D. White in quarterfinals; 49-7 win over St. Charles Catholic in semifinals

Jace’s Game Preview: This is a matchup that the majority of fans expected when the Division II playoff brackets were originally released. The University Lab Cubs and the St. Thomas More Cougars have been the most dominant teams as the Cubs have outscored opponents 578-128 while the Cougars have scored an incredible 43 points or more in every game this season outscoring opponents 713-193. Even in the Cougars’ only loss this season against Catholic High B.R., the offense scored over 40 points. For the Cubs, it was a little deja vu facing the De La Salle Cavaliers in the semifinals, which is a team that lost to the Cubs in the Superdome for the second year in a row. Once again, the Cubs did not have trouble with the Cavaliers winning 43-14 and advancing to the Super Dome for the second straight season. The St. Thomas More Cougars have established themselves as one of the best offenses in the state regardless of classification. In their semifinal game against the stingy St. Charles Catholic Comets, the Cougars’ explosive offense took form thanks to star junior QB Caleb Holstein, who threw for over 200 yards and four touchdowns as well as senior wide receiver Dalen Cambre, who caught two of Holstein’s touchdown passes as well as thrown for another one to help the Cougars coast their way to the Dome with a 49-7 dominant victory. Heading into this game, the University Lab Cubs are arguably one of the best teams not only in the state, but in the entire country and they are riding on a 25 game winning streak. If there is a team that can hang with University Lab and pull off an upset, it is the St. Thomas More Cougars thanks to offensive playmakers like Holstein, Cambre, senior WR Deion Senegal, senior RB William Cryer, and others. This has the potential of being the highest scoring matchup out of all the games throughout the weekend. It is going to be one of those 50-40 games. The Cubs’ offense featuring senior QB John Gordon McKernan, Virginia commit RB Michael Hollins, Alabama commit WR Christian Harris, Georgia commit WR Makiya Tongue, etc. are going to be too much for the Cougars defense to handle. It will come down to which defense can get a stop in this game, and I do believe that the Cubs’ defense featuring Clemson commit LB Bryton Constantin and LSU commit Jaquelin Roy will get enough stops for them to win their second straight state championship.

Cameron’s Game Preview: This might be the highest scoring game in the Dome. Both offenses are explosive and can put up some points. University High has a few more playmakers on the defensive side so that might be the factor that gets the Cubs the win.  I think in the end this game comes down to who has the ball last.

Lee’s Game Preview: “This is going to be a high scoring game in the Super Dome. You might see between 60-80 points combined in this game. I think St. Thomas More is the only team in the state that can score a lot of points on University Lab because their offense is built on doing this. You have to have a good offensive line in order to stay in a game like this and St. Thomas More has that. Also, Caleb Holstein will be the best quarterback that the Cubs face this year. St. Thomas More will score their points, but I do not think that the Cougars can slow down the Cubs’ offense. Most people think that it will be a blow out. I don’t think it will be a blow out, but what I do think, in the end, University Lab will win the state title.”