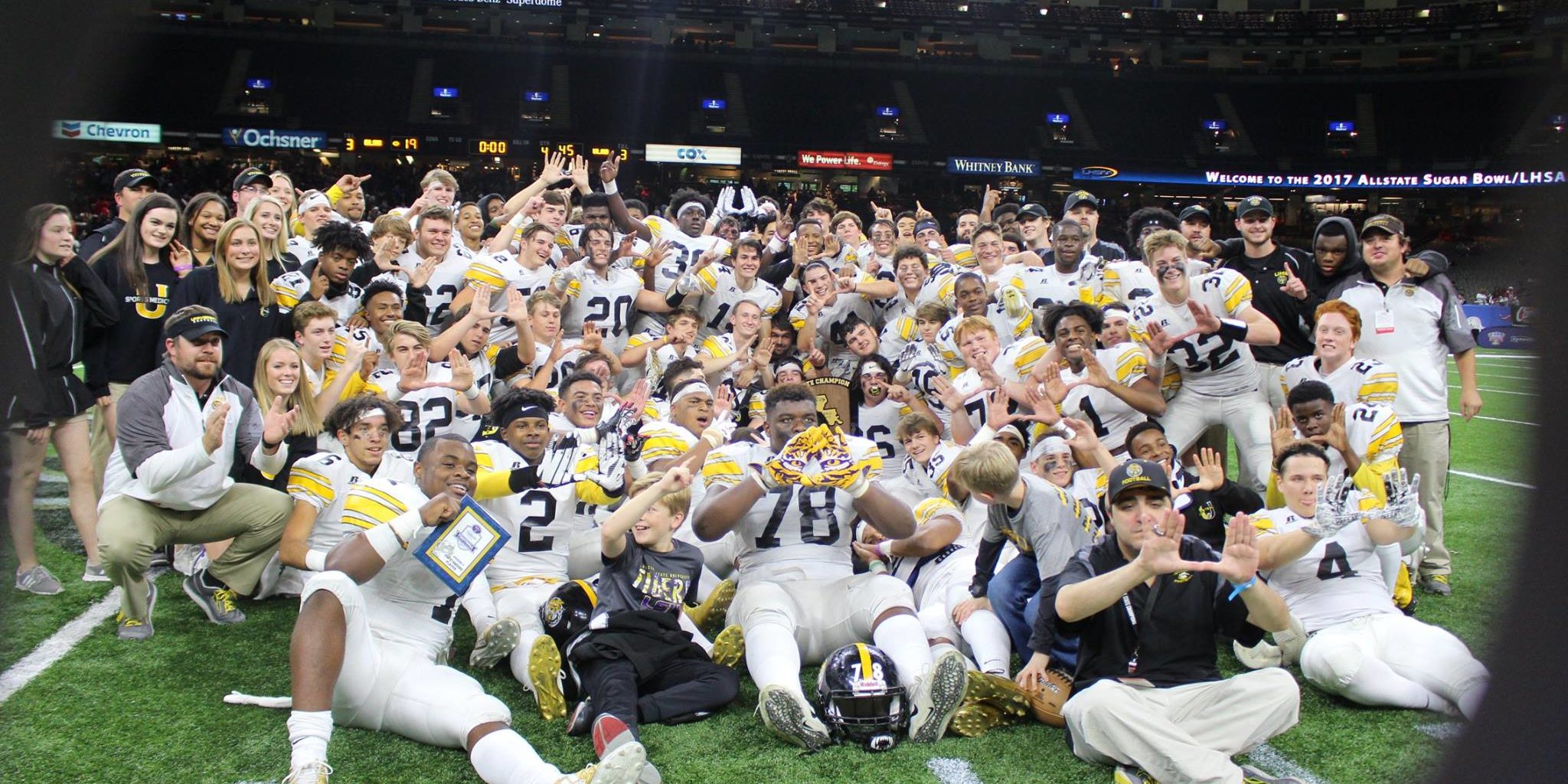 What a great weekend it was for Louisiana high school football fans! Over three days, 18 of the state’s best teams battled it out for the title of being state champions. These teams worked all spring, summer, and fall for a chance for this moment. In the end, nine teams came out as state champions. It was a long journey to the Dome and it was one full of exciting moments as well as ups and downs, but these state championship teams finished the long winding journey on top. Now, the teams come home with a state championship trophy. No matter if these players go on to play collegiate football or if they end their careers at the high school level, these players will not forget what it meant for their team to hold up a state championship trophy. For the teams that lost this weekend, there is nothing to hang their heads about. They got to a point in which a lot of other teams would have dreamed about reaching. Over the course of the week, we will recap each and every game that went down over the weekend. There is still a lot going on in the football world as bowl games will be fixing to start, the NFL regular season is about to come to an end, and there is still a lot of All-Star games that will be going on at the high school level, but we will have to wait until next season to see Friday night football once again. As we wrap up the 2017 Louisiana High School Football season, we will give our analysis of all that went on during the weekend. Today, we will talk about the fifth game of the LHSAA Prep Classic which was the Division II State championship game between De La Salle and University Lab.

Game Recap: The Division II state championship game was a matchup that a lot of people were looking forward to watching the most as this game featured arguably the two best teams in any classification all season long. Both teams were ranked #1 and #2 in the Division II playoff bracket. Not only were both teams undefeated, but both teams have not been tested on their way to being undefeated. Obviously, something had to give when both of these teams went up against each other. It could have been a disaster for University Lab early on as the Cubs almost turned the ball over three times on their first five offensive plays, but luckily, two passes were dropped by De La Salle defenders and a fumble was recovered by the offense. It was pretty obvious that the bright lights of the Superdome were a little too big for the Cubs early on, but the team kept on playing. Early on, the De La Salle defense had some success against the Cub offense shutting down University Lab’s star junior running back Mike Hollins as the offense had only 22 total yard in the first quarter. The first score came in the second quarter when University Lab senior kicker Aidan Gale was able to connect on a 24 yard field goal to give the Cubs an early 3-0 lead. Then, the physical running offense of De La Salle actually took the lead on a screen pass from senior QB Julien Gums to junior RB Kendall Collins that went for 83 yards. The Cavaliers took a 7-3 lead. When the running game was not clicking for the Cubs early in the football game, University Lab junior QB John Gordon McKernon hit some big time pass plays to move the Cubs down the field including an impressive one handed catch by junior WR Makiya Tongue. The Cubs’ passing game would play a crucial role for the later of the game for Hollins as the defensive front was able to stretch out and not load the box, which gave some opportunities for Hollins to make plays. In fact, on that drive, the Cubs took back the lead at 10-7 on a seven yard touchdown run by Hollins. As the Cavaliers were trying to respond after the touchdown, it was De La Salle that made the first costly mistake of the football game when a bad snap allowed the Cubs to fall on the ball inside the opponent’s ten yard line. As a result, McKernon showed that he could make plays using his legs when he scrambled his way for a two yard touchdown run to extend the Cub lead 17-7. Just before halftime, Gums showed why he was the best power running quarterback in the state running for big chunk plays including a long run that set the Cavaliers up in field goal range right before halftime. The Cavaliers were able to get that field goal to make it a 17-10 game, but in the process, Gums suffered a heel injury on that run and for the rest of the game, the star senior quarterback was not 100%. It was still a very close ball game obviously and it seemed like it was going to be a great finish to this ball game especially after De La Salle marched down the field to kick another field goal to make it 17-13, but unfortunately, that was as close as the game was going to get. After the Cubs held the Cavaliers to a three and out, a short punt gave the Cubs very short field to work with. Just a couple of plays later, Hollins showed why he is one of the best junior running backs in the entire state as he spinned off one tackle and then, ran down the sidelines breaking three more tackles on an incredible 31 yard touchdown run to extend the lead at 24-13. Meanwhile, the University Lab defense shut down the Cavaliers’ bread and butter, which is the running game and once again, they had to force another punt. What transpired on the punt was a nice touchdown return by junior running back Michael Martin to really help the team pull away from the Cavaliers. The Cubs would score two more touchdowns with one coming from Hollins and the other coming from Martin. The Cavaliers would add a late touchdown as time ran out, but the damage was done and the Cubs would go on to win their fourth state championship in program history. For the Cubs, led by their head coach Chad Mahaffey, this is a team that has proven to be arguably the best team in the entire state as they defeated other state championship caliber teams during the season such as Catholic High B.R., West Feliciana, and Zachary pretty handedly. The scariest part about this University Lab football team is that a lot of the key players are juniors and are coming back for next season to try and repeat as state champions. For the De La Salle Cavaliers, led by head coach Ryan Manale, it might have not been the storybook ending the program wanted, but still, this is has been a huge year for a program that was competing for its first championship since 1961. This is an up and coming football program under Manale’s leadership that is going to compete for state championships for the next couple of years.

Play of the Game: There could be plenty of candidates for play of the game, but I am going to have to go with the 31 yard touchdown run by Mike Hollins. The way he was able to break multiple tackles against a really good De La Salle defense was pretty impressive and it also showed how special a player he really is. That touchdown extended the Cub lead to 11 and really took any momentum away from De La Salle as they were not able to come back in the football game.

University Lab Player of the Game: The player of the game, for the Cubs, is none other than Mike Hollins. Hollins has been the team’s workhorse running back the whole season and once again, he was able to help carry the running game in the biggest game of the year. In the win, Hollins was selected as the MVP by the media as he ran the ball 20 times for 124 yards and three touchdowns.

De La Salle Player of the Game: Even though he was not 100% in the second half, De La Salle senior QB Julien Gums, who is committed to playing at Nicholls State next season, suffered a heel injury after a big run in the first half. However, the injury did not stop Gums from competing in the second half. In a losing effort, Gums threw for 85 yards and a touchdown as well as running the football for 67 yards. It was not the best stat production for one of De La Salle’s great all time players, but he tried everything he could to get his team back in the ball game.