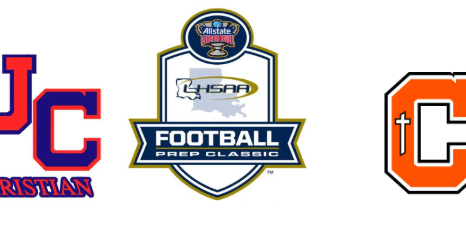 Well, here we are. We have reached the final destination when it comes to the Road to the Dome. 13 teams had one goal in mind and that goal is to be one of nine teams in the end holding a state championship trophy in the Mercedes-Benz Superdome with the Queen smash hit “We Are the Champions” playing in the background. Now, 11 teams’ seasons are over and there are only now only two teams standing. Both teams had a long journey to get to this point, but now, only one team will get the taste of sweet victory while the other team will suffer the agony of defeat. The Louisiana high school football stage does not get any brighter than this. A weekend filled with great championship matchups kicks off this Thursday and the games will conclude on Saturday. The first game on Saturday will be the Division I state championship game, which will feature the two of the best private 5A teams in the state. In this game, the John Curtis Patriots will face the Catholic High B.R. Bears. Both of these teams have shown that they have what it takes to win the state championship, but which of the two teams will be able to get the win in the end? Well, Louisiana Football Magazine’s expert Lee Brecheen has seen all of these teams play and gives his insight on which team will win the Division I state championship. Also, Louisiana Football Magazine staff members Jace LeJeune and Cameron Cerniglia give their insight and predictions on the seventh title game of the championship game week.  This week, we will get you all covered in what you need to know for the Division I state championship game.

John Curtis’ Road to the Dome: Bye in first round; 27-14 win over Jesuit in quarterfinals; 56-34 win over Evangel Christian Academy in semifinals

Catholic B.R.’s Road to the Dome: Bye in first round; 42-19 win over St. Augustine in quarterfinals; 13-10 win over Archbishop Rummel in semifinals

Jace’s Game Preview: Here is another familiar matchup in the Super Dome as both the John Curtis Patriots and the Catholic B.R. Bears will be playing against each other once again. The John Curtis Patriots have once again had a dominant regular season and postseason entering this game with an undefeated record. In the team’s semifinal matchup against the Evangel Christian Academy Eagles, the Patriots’ triple option offense was too much for the Eagles to handle as junior QB Collin Guggenheim ran for 130 yards and five touchdowns. Guggenheim led the Patriots’ rushing attack, which totaled over 401 yards on the ground. Even though the Patriots moved the ball offensively, the Eagles scored their points as well as their junior QB Blake Shapen threw for over 250 yards and three touchdowns. Still, in the end, it was the Patriots that made it back to the Super Dome for an incredible 37th time under legendary Head Coach J.T. Curtis. Meanwhile, the Catholic High B.R. Bears were in a defensive battle against the Archbishop Rummel Raiders. It started off as a frustrating night for the Bears. Defensively, early on, the unit gave up some plays on deadly pass connections from ULL commit QB Chandler Fields to USC commit WR Koy Moore and offensively, Catholic senior QB Cameron Dartez and gang were held to only 55 yards of total offense after two quarters of play. However, thanks to a strong second half, the defense was able to shut out the Raiders and Dartez led two clutch drives including a touchdown pass to help give the Bears a chance to kick the game winning field goal. Just like the last result when the Bears defeated the Raiders in the Super Dome on a game winning field goal, the Bears did it once again to break a 10-10 tie with just seven second left to play thanks to junior kicker Cole Cazenave. That field goal kick sent the Bears to the Super Dome for the second straight year as well as the third time in four years. Special teams made a difference when these two teams met a season ago when the Bears defeated the Patriots 20-14. Head Coach J.T. Curtis will get this squad ready to play especially after last year’s defeat. Thanks to the play of Guggenheim as well as the rushing attack offensively to go along with a stout defensive unit, you know the Patriots will be hard to beat. However, if there is a team that can beat the Patriots, it is the Catholic High Bears, which is a team that has proved to beat them led by one of the best young head coaches in the state in Gabe Fertitta. Dartez has played as good as ever and like Curtis, they have a strong running back committee as well as a stout defense. These are two well coached evenly matched teams in what might likely be the best game of the weekend.

Lee’s Game Preview: “This is going to be a defensive game. Catholic High did not look good in the semifinals, but they played in the rain and they defeated a really good Rummel team. I think that is a good way to judge this Catholic team because I thought Rummel had one of the most underrated defenses in Class 5A. I think this game will come down to a field goal like it did last time. Both teams have really good field goal kickers. Catholic High has a kicker that can kick 55 yards and John Curtis has a kicker that can kick over 45 yards pretty consistently. This is the toughest game to pick for me. I am going to go with Catholic High in a squeaker. It will be close and there will be many lead changes. I just believe Catholic High has a good enough defense to limit John Curtis on points. I think Catholic will find a way to score points like they did last year. Their offensive line can match up with a really good John Curtis defensive line. That will be the difference, but Catholic High’s offensive line has to win that matchup. They have to play well for Catholic to win this game and I think that they will.”