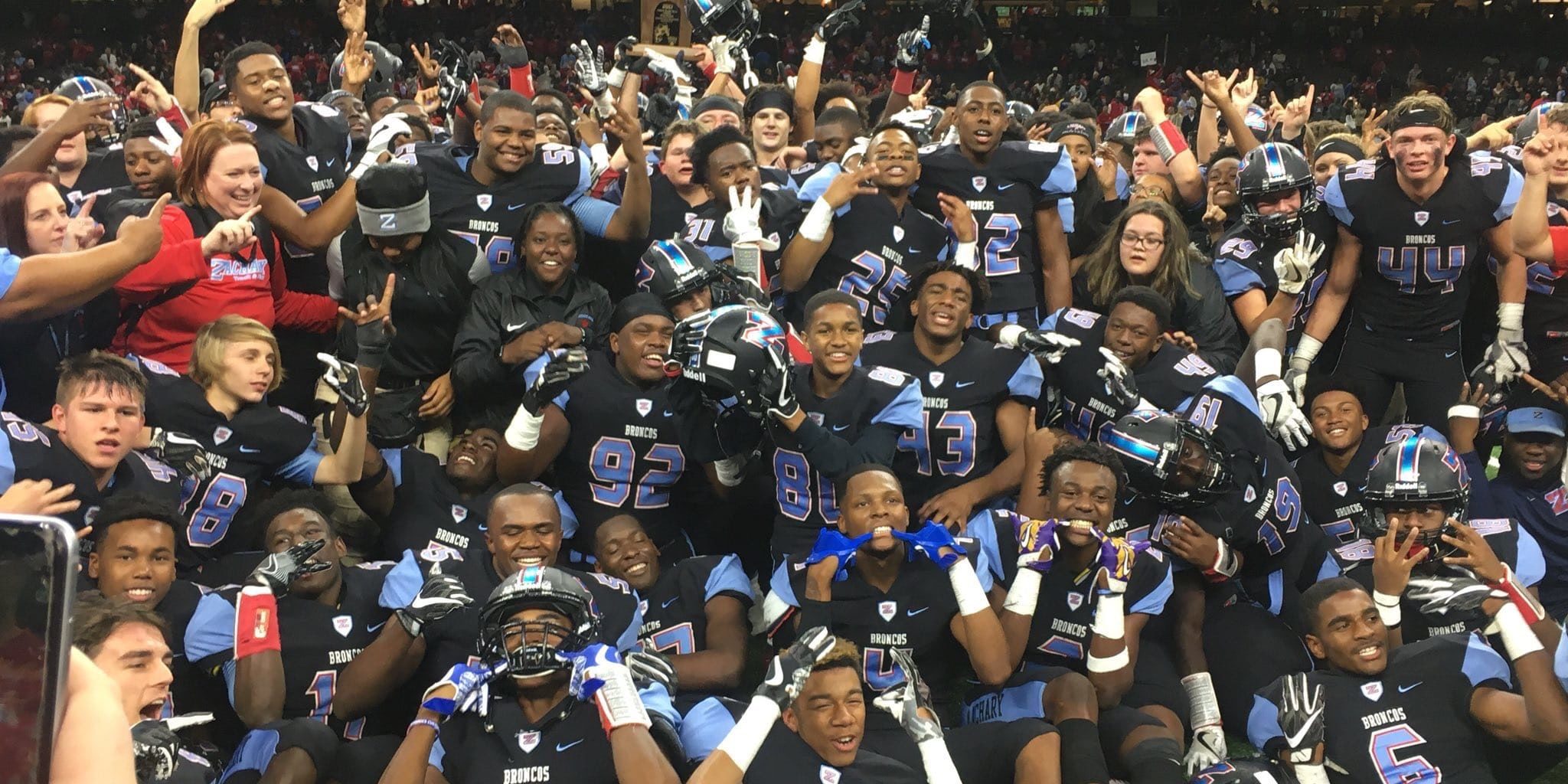 What a great weekend it was for Louisiana high school football fans! Over three days, 18 of the state’s best teams battled it out for the title of being state champions. These teams worked all spring, summer, and fall for a chance for this moment. In the end, nine teams came out as state champions. It was a long journey to the Dome and it was one full of exciting moments as well as ups and downs, but these state championship teams finished the long winding journey on top. Now, the teams come home with a state championship trophy. No matter if these players go on to play collegiate football or if they end their careers at the high school level, these players will not forget what it meant for their team to hold up a state championship trophy. For the teams that lost this weekend, there is nothing to hang their heads about. They got to a point in which a lot of other teams would have dreamed about reaching. Over the course of the week, we will recap each and every game that went down over the weekend. There is still a lot going on in the football world as bowl games will be fixing to start, the NFL regular season is about to come to an end, and there is still a lot of All-Star games that will be going on at the high school level, but we will have to wait until next season to see Friday night football once again. As we wrap up the 2017 Louisiana High School Football season, we will give our analysis of all that went on during the weekend. Today, we will talk about the final game of the LHSAA Prep Classic which was the Class 5A State championship game between Zachary and Hahnville.

Game Recap: The Zachary Broncos, led by David Brewerton, are establishing themselves as one of the best football programs in the entire state of Louisiana. The Broncos came into the state championship game coming off a huge semi-final win on the road against the mighty West Monroe Rebels. Now, the Broncos were ready to capture the program’s second state championship in three years. The Broncos would play one of the hottest teams right now in the Hahnville Tigers led by Nick Saltaformaggio. Just like the Broncos, the Tigers prevailed in a close game against another powerhouse football program on the road in the Acadiana Wreckin’ Rams. The Tigers won in overtime thanks to the man that has helped carry this team all season long in Anthony “Pooka” Williams. Williams is one of the best players in the entire state and is having one of the best playoff runs that you will ever see. Entering the state championship game, Williams ran for 1,174 yards and 13 touchdowns just in the playoffs. Overall, Williams has run for an incredible 2,908 rushing yards and 36 touchdowns. He also scored on the game winning two point conversion against Acadiana to send the team to the Superdome. However, the Broncos, led by a great coaching staff, knew that they had to at least contain Williams if they wanted to add another state championship trophy to their case. After a turnover forced by the Hahnville defense early on, it sure looked like it was going to be the “Pooka” show as he showed his patience and explosiveness on a 26 yard touchdown run to give the Tigers an early 7-0 lead. However, the game took a downward spiral from there for the Tigers. On Zachary’s first scoring drive, senior RB Darweshi Sanders tied the game up on a four yard touchdown run. After a three and out forced by the Zachary defense, sophomore quarterback Keilon Brown showed people that “Pooka” was not the only player that can break loose for long runs as Brown found the open field and outran the entire Hahnville secondary 80 yards to take their first lead of the football game at 13-7. Sanders increased the lead at 13 when he broke loose for a 37 yard touchdown run. The Broncos really had a chance to run away with the game before the first half ended as LB Maverick McClure, who is the son of former LSU and Atlanta Falcons center Todd McClure, scooped up a Hahnville fumble and returned it 45 yards to set up the Broncos in good field position. Just a couple of plays later, Brown was able to throw a 30 yard touchdown to take a 27-7 lead at halftime. The Tigers defense did a great job in the second half not giving up any offensive touchdown in the second half, but the Tigers would just turn the ball over too much. After scoring a touchdown late in the fourth quarter on a Jhaquan Jackson one yard touchdown run, the score was 27-14. Things got interesting when the Tigers recovered their own onside kick, but two turnovers would cost the Tigers in the end. The first turnover would be an interception from Zachary defensive back Jon Burell. Then, senior LB Chris Hart added a final score for Zachary on a 26 yard scoop and score. The Tigers would ride “Pooka” in his final high school game as he had 36  carries for 210 yards. The Broncos did not shut down “Pooka”, but they sure contained him. Entering the game, Williams averaged over 10 yard per carry and in the state championship game, he only averaged half of that average. The Broncos would win big 34-14 to clinch the program’s second state championship in three seasons. For the Hahnville Tigers, it was a magical run as this was the team’s first state championship game appearance since 2003. Even though the result was not what the Tigers were expecting as they were trying to win the program’s seventh state championship win, it was still a magical playoff run that the fans and the team will never forget.

Play of the Game: The play of the game was the 80 yard touchdown run by Keilon Brown. It was the play that shifted momentum from Hahnville to Zachary’s way. The big run by Brown set the tone for what proved to be a dominant performance from the Broncos.

Hahnville Player of the Game: Even though everybody in the stadium knew that #7 was getting the football for Hahnville, it still did not stop Williams from having another statistical good game. The Tigers really leaned on the Kansas commit as he carried the ball 36 times for 210 yards and a touchdowns. Williams ran the ball hard on every play even though a lot of times the play was not there. There was not a lot left in the tank after the Tigers relied heavily on Williams during the playoff run, but there was no question that he laid it all out on the line in his final game as a Hahnville Tiger.