Road to the Dome: LHSAA Class 5A Quarterfinals Recap 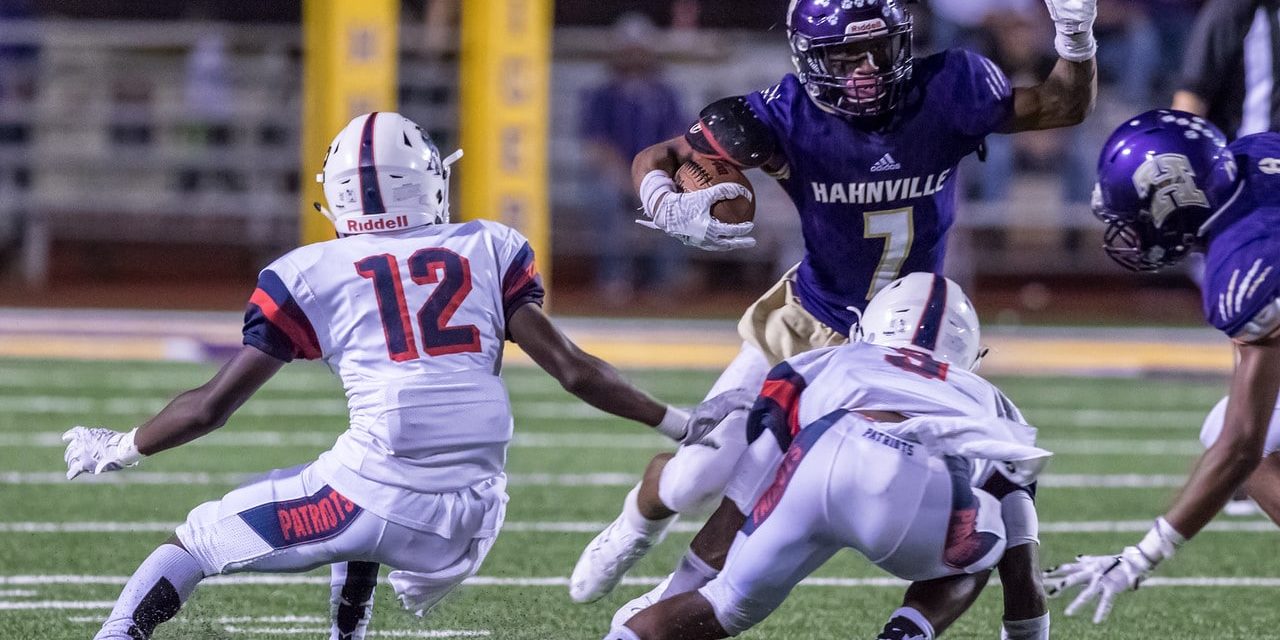 Road to the Dome: LHSAA Class 5A Quarterfinals Recap

Eight teams played in the quarterfinals of the Class 5A playoffs, but only four of those teams will advance to the next round. For the four teams that lost this week, their season is over, but for the four teams that move on to the next round, those particular teams have one goal. That is to be one of nine teams in the end holding a state championship trophy in the Mercedes-Benz Superdome with the Queen smash hit “We Are the Champions” playing in the background. For Louisiana football fans, this is the most wonderful time of the year. It is our version of “March Madness”. This year, we got you covered as for the next couple of weeks. We will go through all of the matchups from 1A all the way to 5A each and every week leading up to the All-State Sugar Bowl/LHSAA Prep Classic from December 7th-9th. We weren’t able to get in our 5A playoff preview before the games started, but we will give you a quick recap of the games and what actually went on before we give out our semi-final previews later tomorrow.

Game Recap: Like last week on the road against Destrehan, the Rebels were against the ropes early in this game against a red hot Barbe football team that is on a seven game winning streak as the Buccaneers jumped off to an early 10-0 lead. However, after that, it was all West Monroe, who scored an unanswered 31 points before allowing a late touchdown to make it 31-17. Unsurprisingly, West Monroe QB and Alabama commit Slade Bolden took over the game throwing for 147 yards and two touchdowns with one thrown to senior WR Jairius Henry and the other to junior WR Michael Hamburg while running the ball for 210 more yards and another touchdown. West Monroe junior running back Cameron Wright had himself a great game was well on the ground with 99 yards rushing and a touchdown run. It was a great game by the veteran Rebel offensive line who was facing a loaded box all night long. Defensively, the Rebels dominated Barbe junior QB Luke Richard and company. The Rebels outgained the Buccaneers on the ground 309 to 92. West Monroe sophomore defensive back Brooks Miller had himself the game of his life intercepting two Richard passes to help get the win. For Barbe Head Coach Mike Cutrea and the Barbe Buccaneers, there is nothing to be ashamed of as the team had a great season winning 11 games and making the quarterfinals. For West Monroe Head Coach Jerry Arledge and the Rebels, the team has one more game to go through if they want to advance to the Class 5A state championship game for the second year in a row. That team is the Zachary Broncos.

Game Recap: This Class 5A quarterfinal matchup featured two of the best skill position players in the entire state in Covington RB Devin Brumfield (Texas Tech Commit) and Hahnville ATH Anthony “Pooka” Williams (Kansas Commit). This game was going to come down to which defensive front was able to contain the other better and which player was going to have the more productive day. As promised, both runners showed up and proved why they are two of the best in the state. The Covington Lions made a big statement on their opening drive going on an eight play 77 yard drive, which was capped off by their star running back Brumfield on a nine yard touchdown run to put the Lions up top 7-0. The Tigers responded right back with their junior QB Jha’Quan Jackson, who ran for a 25 yard touchdown to tie the game. After getting a stop on defense, the Tigers got a stop and took the lead as Jha’Quan Jackson took advantage of the entire defense keying on “Pooka” and rushing for his second touchdown. The Tigers, then extended the lead to ten after a Thomas Rascoe field goal. Then, Brumfield ran for his second touchdown of the game from 28 yards out to make it 17-13. After both teams traded scores once again to make the game 24-21, the Anthony Williams show took over as Williams had back to back touchdowns of 39 yards and 25 yards to pull away from the Lions 38-27. It was a great showdown to two of the best runners in the state as Brumfield ran for an incredible 268 yards and four touchdowns, but somehow, it was overshadowed by Williams’ incredible game of 304 yards and two touchdowns. The crazy thing about Williams’ third straight 300 yard performance is that he could have rushed for more yards and two more touchdowns if it was not for two holding penalties. For Greg Salter and the Covington Lions, their goals of an undefeated season and a state championship come to an end in the quarterfinals, but there was no denying of how special a season it was. For Nick Saltaformaggio and the Hahnville Tigers, they are one game away from reaching the Superdome with the Acadiana Wreckin’ Rams in their way.

Game Recap: The Live Oak Eagles were already having their best season in the history of their football program heading into their quarterfinal matchup against traditional power Acadiana and for most of the game, it seemed that the Eagles were going to keep their playoff magic alive with another upset. After the Rams took an early 7-0 lead, the Eagles responded before the end of the first quarter with a 53 yard run from their quarterback Sal Palermo to set Live Oak at the one yard line. Just a play later, Palermo got in the end zone to tie the game at seven. The Eagles were looking to take the lead as the offense was driving the ball inside the Rams’ 30 yard line when Acadiana’s Vontrevious Monette scooped up the fumble giving the Rams the ball back. With 41 seconds left to go in the half, the Rams took a 10-7 lead on a Noah Anderson field goal. However, the lead did not last long as Palermo hit a 79 yard touchdown pass to Bryson Snapp 40 seconds into the third quarter to regain the lead at 14-10. Both option offenses did move the ball, but at the same time, both teams had mistakes ruining their long drives. For the Eagles, it was the turnovers as the offense fumbled the football three times in the game. Meanwhile, the Rams suffered mental mistakes racking up 14 penalties for 90 yards to set the Rams back. Without Acadiana RB Dillon Monnette, who ran 22 times for 280 yards before exiting the game with an injury in the fourth quarter, it looked pretty bleak that the Rams were going to overcome the 14-10 deficit. Well, it was until the Rams decided to think outside the box with a halfback pass from Acadiana RB Regrick Francis to WR Larryll Greene for a 59 yard touchdown to get the game winning touchdown. The Eagles could not hold the ball long enough as the Acadiana offense dominated the time of possession thus getting the 17-14 win. It was a great game by the junior Live Oak QB who ran for over 100 yards, threw for 100 yards, and scored the only two touchdowns for the Eagles, but the Acadiana Rams just had the ball too long and the three Eagles turnovers would turn out to be costly. The Rams ran 57 plays and rushed for 363 yards while the Eagles ran 32 plays and rushed for 176 yards. For Brett Beard and the Live Oak Eagles, this is a year that the team should never forget as this is the greatest season in the history of the program and the direction is only getting higher. For Ted Davidson and the Acadiana Rams, they are once again in the position to contend for a state championship.

Game Recap: The Zachary Broncos entered the game trying to reach at least the semi-finals for the third year in a row while the Airline Vikings were trying to win their seventh straight game under new QB Jordan Gladney. The Zachary Broncos were off to a very fast start to say the least especially the Broncos passing attack. Zachary star sophomore QB Keilon Brown threw three deep touchdowns with one to RJ Allen and two to Trae Shropshire. However, the Vikings did not quit. The Vikings offense got a spark when Gladney threw a deep touchdown pass to Nate Fullilove for a 47 yard touchdown to help put the Vikings on the the board. After that play, the Vikings gained a lot of momentum. After a touchdown run by Gladney to make it a touchdown game, the Vikings defense stepped up as Airline DB Brandon Marshall intercepted Brown’s pass for a touchdown to tie the game at 24. When it seemed that Airline was going to take control of the game with their big comeback, the Broncos took back the advantage taking the lead on a Martell Fontenot to give the Broncos a 24-21 lead. Then, after an Airline turnover, the Broncos sealed the game for good with a Keilon Brown one yard touchdown run with over three minutes remaining in the game to take the ten point lead. The Broncos and the Vikings put on a great battle, but it was the Broncos that were able to prevail through. What a turnaround it has been for Bo Meeks and the Airline Vikings as nobody would have pictured this team making the quarterfinals after a 44-6 loss to Evangel Christian and losing their starting quarterback Brad Fream for the season in that game. It has definitely been a season to remember for Vikings fans. For David Brewerton and the Zachary Broncos, this will be their third straight semi-final game. The Broncos will try and make their second appearance in the Class 5A state championship game against the number one seed West Monroe Rebels, who are looking to make it back to the Superdome after making it last season.