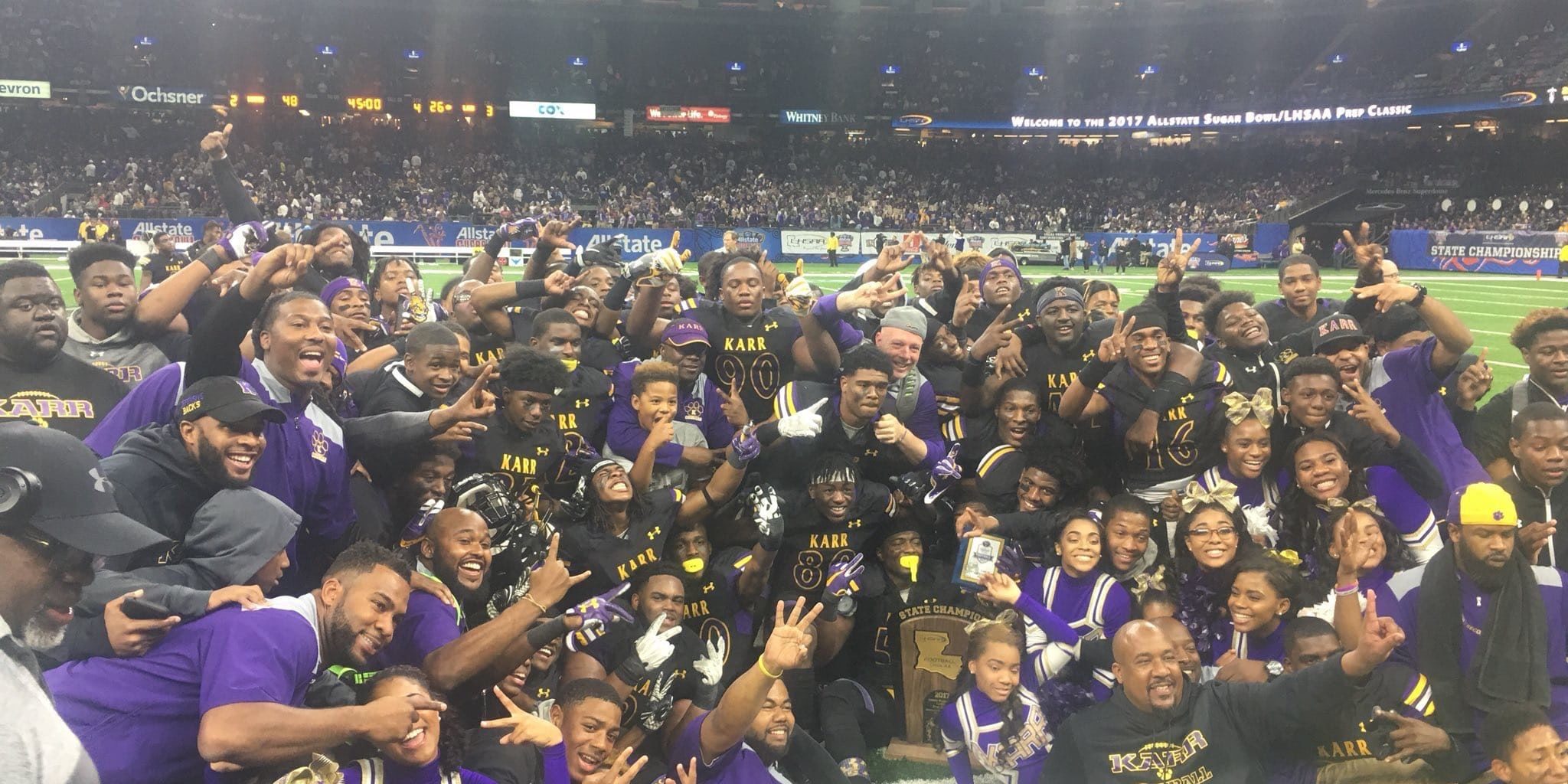 What a great weekend it was for Louisiana high school football fans! Over three days, 18 of the state’s best teams battled it out for the title of being state champions. These teams worked all spring, summer, and fall for a chance for this moment. In the end, nine teams came out as state champions. It was a long journey to the Dome and it was one full of exciting moments as well as ups and downs, but these state championship teams finished the long winding journey on top. Now, the teams come home with a state championship trophy. No matter if these players go on to play collegiate football or if they end their careers at the high school level, these players will not forget what it meant for their team to hold up a state championship trophy. For the teams that lost this weekend, there is nothing to hang their heads about. They got to a point in which a lot of other teams would have dreamed about reaching. Over the course of the week, we will recap each and every game that went down over the weekend. There is still a lot going on in the football world as bowl games will be fixing to start, the NFL regular season is about to come to an end, and there is still a lot of All-Star games that will be going on at the high school level, but we will have to wait until next season to see Friday night football once again. As we wrap up the 2017 Louisiana High School Football season, we will give our analysis of all that went on during the weekend. Today, we will talk about the eighth game of the LHSAA Prep Classic which was the Class 4A State championship game between Edna Karr and Lakeshore.

Game Recap: Once again, the Edna Karr Cougars, led by Brice Brown, have made an appearance in the LHSAA Prep Classic. This marks the seventh state championship  appearance in eight years for the Cougars. In fact, the Cougars are the only team this season that have played in the Dome the year before. The Cougars have plenty of success in the past including three state championships, but this year’s team is trying to accomplish something that no other Edna Karr team has accomplished and that is back to back state championships. Of course, the Cougars are the heavy favorites entering the game. They will face a team that has had a Cinderella like season in the Lakeshore Titans. The Titans, led by Craig Jones, entered the playoffs with an undefeated record as well as the number two seed and continued that run in the playoffs to make it to this game for the first time in school history. The experience of playing in the big game was a little too much for the Titans squad early on in the football game as it only took the Cougars four plays to get on the scoreboard first. Edna Karr senior QB Skyler Perry threw a perfect pass to a wide open Anthony Spurlock for 43 yards for the first score of the football game. When it seemed that it was going to be a long day for the big underdogs, the Lakeshore Titans quickly responded. Lakeshore junior WR Jacob Bernard returned the kickoff 83 yards for a touchdown showing off his explosiveness and speed in the open field to tie the game at seven. The Cougars would move the football against the Titans, but turnovers would cost the Edna Karr offense on the next couple of possessions. First off, Lakeshore OLB/SS Zachary Womack recovered an Edna Karr fumble after John Houge forced a fumble on Edna Karr junior RB Ahmad Antoine. Then, the Cougars turned the ball over once again when Perry was hit from behind and once again, Womack was there to recover the fumble. Even with the back to back turnovers, the Lakeshore offense could not get much going as they were only able to kick a field goal off those two turnovers to take an early 10-7 lead. However, the Cougars responded with a nine play 80 yard drive, which was capped off by a one yard touchdown run by Edna Karr junior RB Ronnie Jackson to regain the lead at 14-10. After both teams traded touchdowns to make it 21-17, the Cougars extended their lead to 11 when Perry ran for a ten yard touchdown. A late field goal attempt at the end of the first half by Lakeshore shortened the gap to a one possession game at eight. The Titans were hanging right there with the Cougars in the first half, but the question was if the Titans could send it to the fourth quarter. Well, it was all Edna Karr on both sides of the football in the second half. The running back duo of Jackson and Antoine accounted for three touchdowns in the second half. Defensively, the Edna Karr defensive front did a great job of shutting down the state’s leading passer in Lakeshore QB Chris Penton, who entered the game throwing for close to 4,000 yards and over 40 touchdowns, was held to completing less than 50% of his passes for 206 yards and two touchdowns. It was actually pretty remarkable that Penton had that great of a game statistically as he was rushed by a great Edna Karr defensive front seven that sacked him 11 times in the football game. The Cougars were able to pull away in the second half to win 48-26. For the Edna Karr Cougars,  the team accomplished something that has not been done  before at the school, which is two straight state championships in a row. Next season, the Cougars will have the talent and experience to compete for a chance for a three peat next season. What a season it has been for a football program that has only been in existence for just a couple of seasons. In fact, Lakeshore High School has only been around for nine years and the football program has not won a playoff game entering the playoffs this season. There is no question that the future is bright for this young football program.

Play of the Game: Unlike the past couple of other games, there was not a lot of plays that stood out as the play of the game, but I would say the kickoff return for a touchdown by Jacob Bernard would have to be it. Although the Titans did not win the football game, the kickoff return, at least gave some confidence to Lakeshore that they were able to contend with the Cougars in the football game.

Edna Karr Player of the Game: A lot of players definitely deserve this award. Edna Karr senior QB Skyler Perry has done a great job of filling in the shoes of program great Aldon Clark (Arkansas State) and ended his high school football career winning the MVP award with 305 yards and two touchdowns. Both Edna Karr running backs played a big role for the Cougars as they helped the team pull away in the second half. The duo of Ronnie Jackson and Ahmad Antoine combined for an incredible 257 yards and six touchdowns. Overall, the Cougar offense had 570 total yards of offense including over 402 of those yard rushing. However, my MVP award goes to the front seven of Edna Karr. The Edna Karr defensive front frustrated Chris Penton, who is one of the best senior quarterbacks in the state all game long as the defense set a Prep Classic record with 11 sacks. Seven Edna Karr defenders got involved in those 11 sacks. Terrance Casey-Charles led the way with three sacks. Ronell Burbank and Kenneth Lebeau both had two. Sheldon Celestine had 1.5.  Jamier Jackson and Austin Kent both had one and Myron Green had a 0.5 sack. They were the difference makers in the second half as they did not allow the high powered Lakeshore passing game to get back in the game.

Lakeshore Player of the Game: Lakeshore senior QB Chris Penton did all he could to help get his team back in the game facing relentless pressure all night long. He finished his high school career throwing for over 200 yards and two touchdowns. However, the difference maker, for the Titans, was junior WR Jacob Bernard, who showed that he was the fastest player on the field at times. He finished the game with over 200 all-purpose yards and two explosive touchdowns. The first touchdown came on an 83 yard kickoff return and the second came on a 71 yard touchdown reception from Penton.