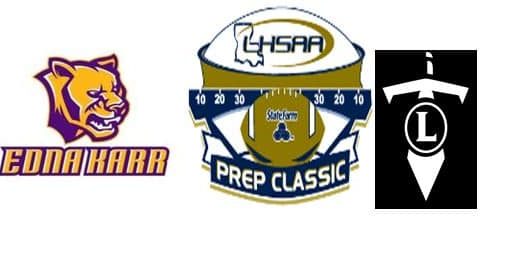 Well, here we are. We have reached the final destination when it comes to the Road to the Dome. 32 teams had one goal in mind and that goal is to be one of nine teams in the end holding a state championship trophy in the Mercedes-Benz Superdome with the Queen smash hit “We Are the Champions” playing in the background. Now, 30 teams’ seasons are over and there are only now only two teams standing. Both teams had a long journey to get to this point, but now, only one team will get the taste of sweet victory while the other team will suffer the agony of defeat. The Louisiana high school football stage does not get any brighter than this. A weekend filled with great championship matchups kicks off this Thursday and the games will conclude on Saturday. The second game tomorrow will be the Class 4A state championship game, which will feature the two best 4A football teams in the state. In this game, the Edna Karr Cougars will face the Lakeshore Titans. Both of these teams have shown that they have what it takes to win the state championship, but which of the two teams will be able to get the win in the end? Well, Louisiana Football Magazine’s expert Lee Brecheen has seen all of these teams play and gives his insight on which team will win the Class 4A state championship. This week, we will get you all covered in what you need to know for the Class 4A state championship game.

Edna Karr’s Road to the Dome: 54-13 win over Buckeye in first round; 40-35 win over Carver in second round; 34-6 win over Northwood-Shreveport in quarterfinals; 20-12 win over Warren Easton in semi-finals

Edna Karr Team Preview: The Edna Karr Cougars have once again made an appearance in the Superdome. They may be a long way from reaching John Curtis’ record of 36 state championship appearances, but it has been a very impressive decade for the Edna Karr Cougars. This will be the team’s seventh state championship  appearance in eight years. Every year, the Cougars lose plenty of collegiate caliber players due to graduation and what they do is they reload not rebuild. The Cougars lost plenty of impact players from last year’s team including most notably QB Aldon Clark (Arkansas State) and Racey McMath (LSU) just to name a few. However, that did not affect the Cougars this season as they only lost only one game this season and that is to a state championship caliber team in De La Salle earlier in the season. What makes the Cougars so good is that they can win any type of football game. That has been shown throughout the playoffs this season. They can win in an offensive shootout type of game such as the 40-35 win over Carver in the second round, and they can also win in a grind it out type of football game like in the semi-finals when they defeated their rivals in Warren Easton 20-12. There is not any major hole that you can look at on this Edna Karr football team led by Brice Brown. The Cougars may have lost one of the best quarterbacks in school history in Aldon Clark, but they replace him with another really good player in Skyler Perry, who can beat you with his arm and his legs. Perry has accounted for over 2,600 yards of offense as well as 35 total touchdowns. He has a great receiver to throw the football on the perimeter in Anthony Spurlock, who has been a big time playmaker with ten touchdown grabs this season. The offense’s bread and butter is the running game. The running back duo of Ahmad Antoine and Ronnie Jackson have combined to run for over 2,000 yards and 30 touchdowns. Opening up the holes for both Antoine and Jackson is none other than the Memphis commit at offensive tackle in Titus Jones. Defensively, the Cougars have always shown their speed and athleticism. Like I said again, this year is no different. In fact, Edna Karr really does not have a weakness at each level of the defense. On the defensive line, there might not be a better front seven right now with big time players such as DE Terrance Casey-Charles, DE Ronnell Burbank, DT Austin Kent, DE Jamier Jackson, and LB Sheldon Celestine. Opposing offense will have trouble running the football against this front seven, but at the same time, will have trouble getting anything going in the passing game as the Cougars may have the best young secondary in football. Defensive backs Chance Carroll, Quindell Johnson, and Devin Bush, who will be one of the best players in the entire country next season, are all college football stars in the making. With an offense that has been able to put up way over 30 points per game along with a defense that has allowed 13 points or less in most of their games this season, you have the makings of a dominant football team. The Cougars will look to continue that dominance with their fourth state championship as well as their second in a row.

Lakeshore’s Road to the Dome: 42-0 win over Pearl River in first round; 40-19 win over Tioga in second round; 55-24 win over Neville in quarterfinals; 33-0 win over Rayne in semi-finals

Lakeshore’s Team Preview: In only the school’s ninth year, the Lakeshore Titans will have already made their first state championship appearance. Entering the playoffs, the Lakeshore Titans, led by Craig Jones, quietly had an undefeated regular season and a district championship. Still, nobody gave the Titans any respect as the number two seed and many thought that the team had a very favorable schedule. The Titans proved the doubters wrong and then some with an incredible playoff run that includes wins over Pearl River, Tioga, Neville, and Rayne. Not only did Lakeshore win all of those football games, but they dominated in every single one of these games. The two games that caught a lot of people’s eyes were the team’s last two wins against Neville and Rayne. The Titans defeated a Neville football team that is coming a third consecutive state championship appearance 55-24. It was one of the rare times that a Neville team looked totally average. In the Titans’ semi-final game, they shut out a Rayne football team 33-0 that had two of the best running backs in the state in Trent Winbush and Darien Harmon. The Titans have played with a chip on their shoulders when they play and it clearly shows on Friday nights. The Titans are led by one of the best quarterbacks in the state around in senior QB Chris Penton. Penton has had himself a miraculous season completing an incredible 70% of his passes for 3,584 yards and 40 touchdowns while only throwing five interceptions. Penton is a great quarterback, but he also has had a lot of help from his skill players ATH Jacob Bernard and WR Jalen Willis. Bernard is one of the most underrated junior athletes in the state as he has done a lot of damage in the passing game as well as in the running game. This season, he has caught 55 passes for 1,211 yards and 13 scores as a receiver and as a running back, he has rushed for 369 yards and eight touchdowns. Meanwhile, Willis has also been a main receiving target for Penton posting similar numbers as Bernard in the passing game with 56 receptions for 1,223 yards and 13 touchdowns. When the Titans run the football, they give the ball to Josh Hayes, who has ran for over 700 yards and 12 touchdowns, and Maximus Lowery, who ran for four touchdowns in the team’s win against Neville. This is a Lakeshore offense that is fun to watch and can score with the best of them. Defensively, the Titans are playing with a lot of confidence. They have one of the most underrated defensive linemen in the entire state in Tylan Driver commanding the middle of the defense. Driver is the biggest college prospect on the defensive side of the football, but the rest of the defense has great players that give it everything they have. Those guys are SS Cody Irvan, CB Michael Gautier, LB Slade Ziegler, LB Zachary Womack, LB Mackie Bellott, LB Christian Wescott, SS Aubrey Womack, and CB Brendan Perry. This is a Lakeshore team that may be inexperienced when it comes to playing in state championship games, but they have been playing with a real chip on their shoulder and will look to prove the doubters one more time against the heavy favored Edna Karr Cougars.

Lee’s Pick: “It’s David vs. Goliath. David is Lakeshore while Goliath is Edna Karr. Lakeshore reminds me of the old Notre Dame teams that were coached by Lewis Cook. They just swarm like Hornets. They believe just like the way Sterlington believed that they would win last season when they played Madison Prep in the Class 2A state championship game. Lakeshore believes that they can win. Edna Karr has the better athletes and it is not even close. However, if Edna Karr does not show up, Lakeshore will take it to them. I think this will be a closer game than people think. However, I think Edna Karr will win in the end.”

Jace’s Pick: “A lot of people are really sleeping on this game. People may think that Edna Karr will run all over Lakeshore, but keep in mind, that this is a #1 vs. #2 seed game and Lakeshore has been dominating teams in the playoffs most notably Neville and Neville has been the team that has battled Edna Karr in the Dome. Edna Karr is obviously the more talented team, but Lakeshore does have a really good football team that can totally take advantage of Edna Karr if they fall flat. I think this could be a trap game for Edna Karr and they should be very careful when approaching this game. I think that the Cougars will be ready and if they are, then, the Cougars should walk away with back to back state championship trophies.”