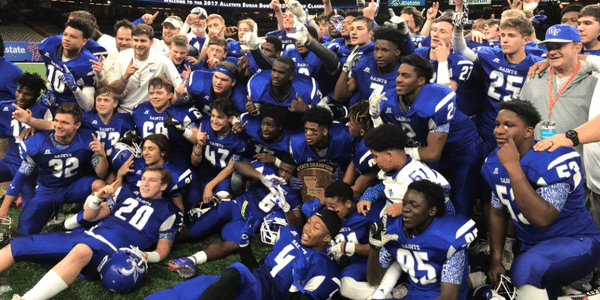 What a great weekend it was for Louisiana high school football fans! Over three days, 18 of the state’s best teams battled it out for the title of being state champions. These teams worked all spring, summer, and fall for a chance for this moment. In the end, nine teams came out as state champions. It was a long journey to the Dome and it was one full of exciting moments as well as ups and downs, but these state championship teams finished the long winding journey on top. Now, the teams come home with a state championship trophy. No matter if these players go on to play collegiate football or if they end their careers at the high school level, these players will not forget what it meant for their team to hold up a state championship trophy. For the teams that lost this weekend, there is nothing to hang their heads about. They got to a point in which a lot of other teams would have dreamed about reaching. Over the course of the week, we will recap each and every game that went down over the weekend. There is still a lot going on in the football world as bowl games will be fixing to start, the NFL regular season is about to come to an end, and there is still a lot of All-Star games that will be going on at the high school level, but we will have to wait until next season to see Friday night football once again. As we wrap up the 2017 Louisiana High School Football season, we will give our analysis of all that went on during the weekend. Today, we will talk about the sixth game of the LHSAA Prep Classic which was the Class 3A State championship game between West Feliciana and Richwood.

Game Recap: The Class 3A State Championship Game featured two teams that broke through to get in the Superdome. The West Feliciana Saints, under Robb Odom, have been one of the best 3A football programs over the last couple of seasons, but the only problem has been that the Saints have not been able to make an appearance in the state championship game. For the last three seasons, the Saints fell short of that goal in the semis-finals. However, with a very experienced team that both has size and speed, the Saints finally broke through to make the state championship game after a 45-26 win over Jennings. On a surprising note, the Richwood Rams, led by Robert Arvie, are the only North Louisiana team to make an appearance in the state championship game. As the number eight seed, the Rams have been on a very interesting run. In all of their playoff games, the Rams have failed to score more than 20 points, but the defense has been the key giving up no more than 17 points in all of those games. The most intriguing matchup, in this game, was West Feliciana’s speed against Richwood’s size and athleticism. However, it was the Richwood offense that would strike first on the first play of the game foreshadowing how many big plays there would be in this ball game. The Rams struck early on when QB Joseph Smith threw a 40 yard pass to senior WR Zion Stokes, but the big play would be for not as three plays later, Smith threw an ill-advised pass and the pass was intercepted by West Feliciana senior RB/CB Derius Davis, who is a TCU commit. The Saints would give the Rams the ball right back on their second play as the offense fumbled the football and the Richwood defense recovered the ball. Both teams traded possessions until Richwood’s defense was able to force another turnover this time coming in an interception. Richwood did capitalize on the second Saints turnover as Smith threw deep to the 6-6, 220 pound WR/TE and Mississippi State commit Geor’Quarius Spivey for a 31 yard touchdown to take the early 7-0 lead. The Saints responded to the Richwood touchdown by scoring a touchdown of their own. The Saints broke through one of their many big plays during the game as their senior QB Derek Turner found open field and ran for a 73 yard touchdown to pull even. After the Saints took their first lead of the football game at 10-7 with a Luke Stelly field goal, the Saints defense was able to get a stop and get its offense the ball back once again before halftime. As a result, the Saints drove right down the field 78 yards on nine plays and scored a touchdown on a six yard touchdown pass from Turner to junior RB/CB Clayton Howard with just over 20 seconds left before halftime. The Saints would miss the ensuing extra point, but they still would hang on to a two possession lead into the half at 16-7. Then, in the second half, the Davon “Smoke” Harris show began for West Feliciana. The Saints opened up the second half in electrifying fashion with Harris returning the kickoff 87 yards for a touchdown to give the Saints their biggest lead of the game at 23-7. Just when it seemed the Saints were going to run away with the football game, the Rams did indeed make a comeback. The Smith and Spivey deep ball connection worked once again for 58 yards as Spivey showed his size and athleticism catching a pass over a couple of Saint defenders and carrying them in the end zone. The Rams, then converted on the two point conversion to pull within eight points. Then, the Saints turned the ball over for the third time in the game to give back the Rams the ball once again and of course, the Rams capitalized once again this time on an Anthony Watson touchdown run. Before you even knew it, the score was 23-21. Just when the Rams were making a game of it, Harris took the game away with another explosive kickoff return of 67 yards to set up the Saints in scoring position. Just a couple of plays later, Harris finished what he started with the kickoff return to get them there as he lined up in the wildcat quarterback and ran for his second touchdown to give the Saints some breathing room with a nine point lead at 30-21. The Rams would really lose momentum later in the third quarter when Spivey was tackled for a big loss by multiple Saint defenders. Spivey was not happy with the way he was brought down and drew an unsportsmanlike flag. As he was arguing with the referees, Spivey was flagged with another unsportsmanlike penalty. Those back to back penalties threw Spivey out of the game. Not only did the Rams lose their best offensive player, but the two penalties put his team in a 3rd and 45 situation. Of course, the Rams had to punt the football away. Then, Davis got in the action with his first touchdown run of the game to give the Saints a 16 point lead once again. Without their top pass catcher, the Rams could not get their offense back in the game and as a result, the Saints offense ran the clock out clinching their first ever state championship 40-21. The Saints finally broke through. After so many years of falling short of a state championship, Coach Odom and the Saints were able to prevail for the West Feliciana community. Meanwhile, the Rams may have not won the state championship, but it was a great run by the Rams winning plenty of close games including an upset over #1 Sterlington. Coach Arvie has done an excellent job with this program and now, the team knows what it takes to get back next season.

Play of the Game: The play of the game was the second kickoff return by Davon Harris. Coach Arvie knew after giving up an 87 yard touchdown on the first kickoff return that they had to avoid kicking the ball off to Harris a second time. At this point, the game was really close as the Rams had all the momentum scoring two unanswered touchdowns. Even though the Rams tried to kick the ball away from the Louisiana Tech commit, the ball still found Harris’ way and as a result, he was able to show off his speed and tackle breaking ability returning a kickoff for 67 yards. That big return resulted in another West Feliciana score to make it a two possession lead. That score brought new life to the Saints and allowed the team to pull away from the Rams.

West Feliciana Player of the Game: The player of the game is none other than the guy that is nicknamed “Smoke” in Davon Harris. The Louisiana Tech commit set a state championship game record of 167 kickoff return yards on only three attempts. Harris scored on one kickoff return and was able to run in for another touchdown. Richwood just tried to kick the ball away from Harris, but he continued to make big plays in special teams and on the offensive side of the football. Whether it was Harris, Derek Turner, Derius Davis, or Clayton Howard, the Rams, who are one of the best defenses in the state, did not have an answer for the Saints’ explosive play makers. With his performance, he was able to help the team pull away from Richwood when they were trying to get back in the football game. Harris’ effort may have been the most impressive individual performance the whole weekend.

Richwood Player of the Game: Time and time again, Richwood was able to get big plays from their big receiving target Geor’Quarius Spivey. The deep passes played a big part in why the Rams were still in the football game. The Mississippi State commit finished with five catches for 113 yards and two touchdowns. Those numbers were also made in only three quarters of play. Spivey was ejected out of the football game following back to back unsportsmanlike penalties. After his absence, the Rams had a tough time getting back in the football game.