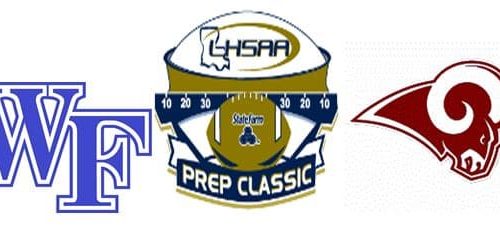 Well, here we are. We have reached the final destination when it comes to the Road to the Dome. 32 teams had one goal in mind and that goal is to be one of nine teams in the end holding a state championship trophy in the Mercedes-Benz Superdome with the Queen smash hit “We Are the Champions” playing in the background. Now, 30 teams’ seasons are over and there are only now only two teams standing. Both teams had a long journey to get to this point, but now, only one team will get the taste of sweet victory while the other team will suffer the agony of defeat. The Louisiana high school football stage does not get any brighter than this. A weekend filled with great championship matchups kicks off this Thursday and the games will conclude on Saturday. The final game today will be the Class 3A state championship game, which will feature the two best 3A football teams in the state. In this game, the West Feliciana Saints will face the Richwood Rams. Both of these teams have shown that they have what it takes to win the state championship, but which of the two teams will be able to get the win in the end? Well, Louisiana Football Magazine’s expert Lee Brecheen has seen all of these teams play and gives his insight on which team will win the Class 3A state championship. This week, we will get you all covered in what you need to know for the Class 3A state championship game.

West Feliciana’s Road to the Dome: 42-13 win over North Webster in first round; 38-12 win over Berwick in second round; 42-7 win over Northwest in quarterfinals; 45-26 win over Jennings in semi-finals

West Feliciana Team Preview: Finally, West Feliciana fans can say that their team is on their way to play in the Superdome. Over the last three years, Robb Odom and the Saints have made three straight semifinal appearances. In all three of those games, the Saints fell short. Now, after a 45-26 win over Jennings, the gorilla is finally off this team’s back. Entering the bracket, the Saints might have only been the #6 seeded team, but there was no doubt about it that this team was a favorite to get to the Superdome. If there was a year for the Saints to finally break through that semi-final hump, this would be the year. The Saints are arguably the fastest team in the whole state with big time play makers in QB Derek Turner, RB/DB Derius Davis, and RB Davon Harris. This season, Turner has accounted for over 2,000 yards and 30 touchdowns. Derius Davis is a star track runner as well as a TCU football commit. His electrifying speed helped Davis have a huge season accounting for 13 touchdowns. Then, there is Davon Harris, or what his friends like to call him “Smoke.” The nickname puts a picture in mind on what kind of player Harris is and what type of speed he has. Harris has over 1,000 total yards of offense and 20 touchdowns. Even those three are the most explosive playmakers, there are still some other guys that will beat opponents with their speed in WR Khiry Morrison, WR Antonio Whitaker, and WR Rjay Harris. Even though there is a lot of speed on the field for the Saints, they cannot put up those type of gaudy numbers without the help from their offensive line. Up front, the Saints have some pretty good players that can control the line of scrimmage on both sides of the football in ULM commit Zakk McKeehan, OG/DT Jakob Fudge, DT Tarik Freeman, OG/DT Taylor Casteel and even sophomore DE/LB Riyan Cotton, who leads the team in tackles. This is a team that has always had the speed and athleticism to make this kind of run, but now, they have finally got to this point. The Saints will try to march their way for their first state championship victory.

Richwood’s Road to the Dome: 20-17 win over North Vermilion in first round; 20-14 win over Loranger in second round; 15-14 win over Sterlington in quarterfinals; 15-8 win over Kaplan in semi-finals

Richwood’s Team Preview: Richwood fans had their share of enduring close finishes at the end of games in every playoff game during this run. In their wins against North Vermilion, Loranger, the defending Class 2A state champion Sterlington, and Kaplan, the Rams were not able to score more than 20 points. However, the defense has given up no more than 17 points in any game and it really has been the driving force in Richwood’s run. The Rams’ defensive unit is led by a big defensive front that features the 6-0, 300 pound Quandarrius Johnson and one of the best linebacking groups in all of  Louisiana that features the two twins Deione and Deivone Reed, Jarviar Wade,and LaStarsky Taylor. Offensively, the Rams may have had their struggles, but this is a group that has a lot of talent including two DI commits in TE Geor’Quarius Spivey, who is a Mississippi State commit, and WR Hidari Caesar. The Rams also have other really good athletes in the backfield in QB Joseph Smith and RB Anthony Watson. The big plays have been there, but if the Rams can find some consistency on the offensive side of the football, this is a team that is very hard to beat thanks to their dominant front seven on the defensive side of the football. It is really surprising that there is only one North Louisiana team that is playing in the Superdome and that team is the Richwood Rams. Head Coach Robert Arvie has done an excellent job with this team in his sixth season as the Rams will appear in the Superdome for the first time, but will be going for the program’s second state championship.

Lee’s Pick: “Robert Arvie has done a phenomenal job at Richwood. Richwood may be the largest team in Class 3A. They look like a 5A team coming off the bus. However, speed kills and West Feliciana has a lot of speed. They are arguably the most athletic team in the state. I like the Saints’ athleticism in this game and I think they will win the football game.”