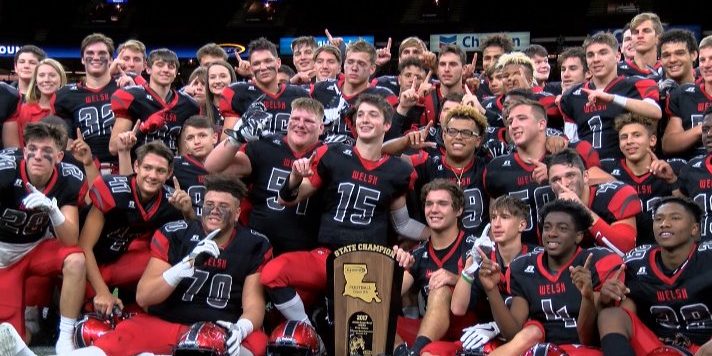 What a great weekend it was for Louisiana high school football fans! Over three days, 18 of the state’s best teams battled it out for the title of being state champions. These teams worked all spring, summer, and fall for a chance for this moment. In the end, nine teams came out as state champions. It was a long journey to the Dome and it was one full of exciting moments as well as ups and downs, but these state championship teams finished the long winding journey on top. Now, the teams come home with a state championship trophy. No matter if these players go on to play collegiate football or if they end their careers at the high school level, these players will not forget what it meant for their team to hold up a state championship trophy. For the teams that lost this weekend, there is nothing to hang their heads about. They got to a point in which a lot of other teams would have dreamed about reaching. Over the course of the week, we will recap each and every game that went down over the weekend. There is still a lot going on in the football world as bowl games will be fixing to start, the NFL regular season is about to come to an end, and there is still a lot of All-Star games that will be going on at the high school level, but we will have to wait until next season to see Friday night football once again. As we wrap up the 2017 Louisiana High School Football season, we will give our analysis of all that went on during the weekend. Today, we will talk about the fourth game of the LHSAA Prep Classic which was the Class 2A State championship game between Welsh and St. Helena.

Game Recap: The Class 2A State Championship Game featured two teams that have not made frequent trips to the Superdome in the past, but both made big runs in the postseason this year. The Welsh Greyhound, led by John Richardson, have come up so close to making the state championship game in the past, but with a very experienced team this year, they were able to breakthrough for the program’s third state championship appearance and first since 1992. Meanwhile, the St. Helena Hawks, led by Brandon Brown, broke through last season when they made the semi-finals. Now, the Hawks made that next step this season when the team was able to defeat Ferriday in the semi-finals to make the appearance in the Superdome. Just like the Ascension Catholic Bulldogs, the St. Helena Hawks had to lose one of their star players after suffering a serious injury before the state championship game. In the Hawks’ semi-final game against Ferriday, St. Helena senior RB/LB Aaron Hurst broke a bone in his neck. Luckily, Hurst was alright and is undergoing surgery this week. However, the Hawks had to play without their senior leader and it showed that they missed them dearly early on in the game. The Welsh Greyhounds were ready to breakthrough for their school community as they were trying to bring home the program’s first football state championship. Things could have not started any better for the Welsh Greyhounds early in the football game. After taking a 3-0 lead in the first quarter, the Greyhounds built on their lead with a 28 yard touchdown pass from their senior star quarterback Zach Hayes to junior wide receiver Da’Ren Zeno to make it 10-0. That first touchdown started a dominant second quarter as the Greyhounds outscored the Hawks 28-0 in that quarter alone. The Greyhounds scored on an one yard touchdown by Hayes, a 13 yard touchdown pass from Hayes to junior WR Alec Iguess, and a 22 yard touchdown pass from Hayes to Zeno. Nothing seemed to go right for the Hawks in the first half as not only did they have a tough time stopping Hayes and the passing game, but the Hawks offense turned the football over three times. With all those factors in play, the Greyhounds took a commanding 31-0 halftime lead. Even though the Hawks were down by 31 points and could not do anything right in the first half, the Hawks never gave up. In the third quarter, the Hawks were able to get on the board with a Troy Hurst, who is Aaron’s cousin, touchdown run to make it 31-7. After Hayes threw for his fourth touchdown of the game to make it 38-7, the Hawks made a strong push with a very good fourth quarter scoring 18 unanswered points with a 15 yard touchdown pass from Ricky Travis to senior WR Devin Taylor, another touchdown pass from Travis to Hurst, and finally a Hurst seven yard touchdown run. The Hawks tried a two point conversion on each of those touchdowns, but failed, It was a great effort by the Hawks, but time ran out and the Greyhounds were able to hold on to capture their first state championship victory. It has been a great season for the Welsh Greyhounds as this time, the team was able to pass by their arch rivals in the Kinder Yellow Jackets as well as the Many Tigers to finally reach the state championship under John Richardson and prevail through for a state championship that has been long awaited by the Welsh community. The St. Helena Hawks may have lost the state championship, but what Brandon Brown has done, is nothing short of incredible and after improving their record each season under Brown, there is not a doubt that the St. Helena Hawks will be back competing for another state championship pretty soon.

Play of the Game: The play of the game occurred in the first half. The score was 17-0, but the game really changed on this play. The St. Helena defense looked like they were going to force the Welsh offense to only three points, but a low snap on the field goal attempted forced Zach Hayes, who was the holder on the play to roll on his left, but luckily he was able to find Alec Iguess for a touchdown. It seemed that the Hawks, at worst, were going to give up three more points and with a botched hold, it seemed that the Hawks were not going to give up any points, but in the end, the guy that was the holder was indeed the starting quarterback and was able to find an open receiver to make it a 24-0 lead and seize momentum in the football game.

Welsh Player of the Game: The Welsh player of the game was none other than the guy who helped get them there in senior QB Zach Hayes. In this game, Hayes proved why he is probably the best quarterback in the Lake Charles area in the biggest game of the year as he completed 13 of 18 passes for 140 yards and four touchdown passes. He also ran for a touchdown as he accounted for all of the Greyhounds’ offensive touchdowns in the game.

St. Helena Player of the Game: The Hawks rallied back in the fourth quarter thanks to the efforts of senior QB Ricky Travis, who threw for 225 yards and two touchdowns, and senior ATH Troy Hurst. Hurst, who is a Memphis commit, ran for two touchdowns and was on the receiving end of one of Travis’ touchdown passes. Both these seniors did a great job of bringing their teams back to make it at least a very interesting ending and who knows, what would have happened if both teams did play another quarter.