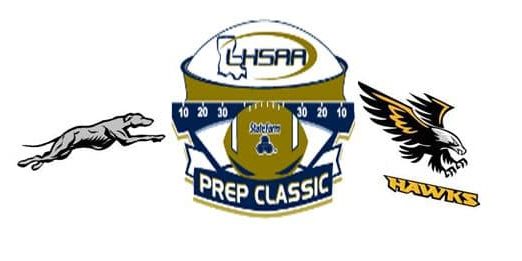 Well, here we are. We have reached the final destination when it comes to the Road to the Dome. 13 teams had one goal in mind and that goal is to be one of nine teams in the end holding a state championship trophy in the Mercedes-Benz Superdome with the Queen smash hit “We Are the Champions” playing in the background. Now, 11 teams’ seasons are over and there are only now only two teams standing. Both teams had a long journey to get to this point, but now, only one team will get the taste of sweet victory while the other team will suffer the agony of defeat. The Louisiana high school football stage does not get any brighter than this. A weekend filled with great championship matchups kicks off this Thursday and the games will conclude on Saturday. The first game tomorrow will be the Class 2A  state championship game, which will feature the two best 2A football teams in the state. In this game, the Welsh Greyhounds will face the St. Helena Hawks. Both of these teams have shown that they have what it takes to win the state championship, but which of the two teams will be able to get the win in the end? Well, Louisiana Football Magazine’s expert Lee Brecheen has seen all of these teams play and gives his insight on which team will win the Class 2A state championship. This week, we will get you all covered in what you need to know for the Class 2A state championship game.

Welsh’s Road to the Dome: 55-7 win over Springfield in first round; 35-20 win over Independence in second round; 44-14 win over Kinder in quarterfinals; 28-18 win over Many in semi-finals

Welsh Team Preview: The Welsh Greyhounds, under John Richardson, are coming off another impressive regular season this time finishing with an 8-1 season, but the problem has been making playoff runs as the Greyhounds won only one playoff game a season ago. However, even though the team was very talented last season, they were very young as well. This year, the team is a lot more experienced with plenty of returning starters coming back for this season. That experience has really helped this team go over the hump this season. Over the years, the Greyhounds’ biggest kryptonite was none other than the Kinder Yellow Jackets, which is a team that has defeated the Greyhounds on numerous occasions when it came to district championships and clinching a spot in the state championship. In fact, the Yellow Jackets defeated the Greyhounds in the Class 2A semfinals in 2015 for a chance to go to the Superdome. Not only did the Greyhounds defeated their arch rivals in the playoffs, but they also defeated another 2A powerhouse in Many in the semifinals to reach this point. It all starts with the signal caller and the Greyhounds have one of the best quarterbacks in the state in Zach Hayes. The senior quarterback has thrown for nearly 3,000 yards and 32 touchdowns this season. Hayes is one of the best players at his position around, but he can’t do it all by himself. By his side, Hayes has one of the best fullbacks/tight ends around in the state in Pearse Migl. He is a big guy at 6-1, 230 and can do it all whether it is receiving, blocking, or even running. Also, add in play makers such as WR Alec Iguess, WR Da’Ren Zeno, WR Tamorick Jackson, WR Reggie Jackson, WR Austin Benoit, RB Charlie Watkins, and others, you then have yourself a spread offense that averages over 30 points a game. Defensively, the group is also experienced and has a great blend of size and speed to go along with it. On the front seven, the Greyhounds have some size in DE John Daigle, DT Conner Richert, and DE Dominic Prudhomme. In the back half, the defense is very quick with players such as LB Josh Pickle and defensive back Cade Iguess leading the way. When the team needs a field goal or an extra point, they can rely on Trevor Lopez who is a three year starter at kicker. Overall, this is a very experienced football team that has a lot of depth and talents at the 2A level. Even with all of the obstacles and all of the tough tasks the team has gone through to go back to the Superdome for the first time in 25 years, they have one more team blocking them from achieving the school’s first state championship and that is the St. Helena Hawks.

St. Helena Team Preview: What a turn around it has been for the St. Helena Hawks. Their head coach Brandon Brown has done one of the best coaching jobs in the state for what he has been able to do for this program. When Brown took over, the Hawks were 2-8. Over the last five seasons, the Hawks have improved on their record every single season and had a breakout season last year going all the way to the Class 2A semifinals where they lost to Madison Prep. This year, with almost everybody returning, it was going to be the Hawks’ season to make a run at the Dome. After posting a 8-2 regular season, the Hawks were ready to make their playoff run. After back to back 54-6 blowout victories in the first two rounds, the Hawks met their match in the team that defeated the Hawks earlier in the season for a district championship. Just like the Greyhounds, the Hawks overcame their rivals to advance to the semi-finals to play a Ferriday team that is loaded with DI talent. Luckily, the Hawks match up with the Trojans really well as they have a lot of players that can go DI as well. It was a low scoring physical game, but the Hawks prevailed to go back to the Superdome for the first time since 2004. Even with all of the celebrating going on, the Hawks suffered terrible news in the process as one of their star players senior running back/linebacker Aaron Hurst suffered a serious neck injury during that game. However, the good news is that Hurst will make a full recovery. The Hawks now will have to find a way to win the biggest game of the year without their star senior play maker. Even with the loss of Aaron Hurst, the Hawks have plenty of athletes including QB Ricky Travis, who is a special player that can do it all with his 4.5/40 speed, and Aaron’s cousin Troy Hurst, who is a Memphis commit that can play almost any position. The offensive line is also massive as the whole line averages way over 300 pounds. This St. Helena team has the size and the athleticism to compete with almost anybody in the state.

Lee’s Pick: “The more talented team is St. Helena, but I am going to go with the better team, which is Welsh. I think St. Helena can play with anybody when it comes to their talent. They are big and they have some great athletes on their team. I have seen Welsh play this season and I am a very big fan of their quarterback Zach Hayes. He is a very underrated player. They also have the best fullback in the state in Pearse Migl. When it comes to a third and short situation, he is almost unstoppable. I think Welsh will play ball control and will win the football game.”

Jace’s Pick: “I was actually leaning towards St. Helena to win the football game, but when I heard about Aaron Hurst’s injury, it really has changed my decision. Obviously, St. Helena will have plenty of other athletes to give the football to, but losing a player that has made an impact on a game can really change things. Led by their senior quarterback and veteran team, I really like the Greyhounds to win their first state championship.”