Road To The Dome: LHSAA Class 2A Quarterfinals Preview 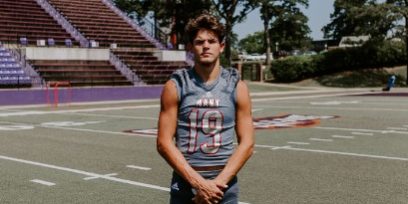 Road To The Dome: LHSAA Class 2A Quarterfinals Preview

16 teams are down and there are eight more teams left to go. All eight teams have their own strengths and weaknesses, but they all have one goal in mind. That is to be one of nine teams in the end holding a state championship trophy. For Louisiana football fans, this is the most wonderful time of the year. It is our version of “March Madness”. This year, we got you covered as for the next couple of weeks, we will go through all of the matchups from 1A all the way to 5A each and every week leading up to the All-State Sugar Bowl/LHSAA Prep Classic from December 13th-14th. Louisiana Football Magazine’s recruiting expert Lee Brecheen and editor Jace LeJeune give their picks on which teams will survive and continue their march to the Super Dome. Today, we preview the Class 2A Quarterfinal matchups.

Game Preview: The Kinder Yellow Jackets are looking to make another deep run into the postseason under head coach Bret Fuselier, who once led the team to three straight state championship appearances. The Yellow Jackets have the formula for playing in November by playing ball control football. Their option running attack is led by quarterback Hayes Fawcett, who does a great job of making decisions in the offense. The running back rotation is loaded with Skyler Leckett, Ty Fuselier, Gavin Johnson, and Chandler Lacour all getting equal opportunities running the football. Also, their special teams is equally strong with one of the best kickers in Class 2A in Zack Lafargue. The Yellow Jackets have the formula, but can that formula be tested against the Ferriday Trojans, which have been dominant in all of its wins this season under head coach Stanley Smith. After losing to Alexandria in the first game of the season, the Trojans have outscored their opponents an amazing 638 to 67 points. In that span, the offense has scored more than 36 points in every game. The explosive offense is led by dynamic quarterback Kobe Dillon, who could be difference maker in this whole bracket when it is all said and done. Even though the Trojans are not too high in numbers, they make it up for the quality of players that they have. Skill players such as Justin Burns, Da’minya Milligan, Jyron Milligan, Byron Milligan, Tevyn Byrd, and Sebastian Turner all have great speed. Also, big defensive tackle Roosevelt Davis, who is 6-6, 285 pounds, will provide the Trojans some size as well.

Game Preview: The Loreauville Tigers have made one of the most impressive turnarounds in just an one year span under head coach Terry Martin. A season after winning just one game, the Tigers have won not only eight games, but have advanced to the quarterfinals after upsetting higher seeds in Lake Arthur and Mangham in the last round. One of the key difference makers in the turnaround is quarterback and Southeastern commit Zy Alexander, who has become the team’s X factor after missing the majority of last season due to a torn ACL. Even though the Tigers have undergone a big turnaround, the program can take the next step if the team gets a victory against the defending Class 2A state champion Amite Warriors. The Warriors, under head coach Zephaniah Powell, have not been as dominant as last season, but this team still has what it takes to compete for a state championship. The Warriors defense, led by Miami defensive back commit Daran Branch and safety Kevin Bickham, who has received offers from ULM, Kentucky, and others, has only allowed nine points in its last two games. Meanwhile, the Warriors offense still features a lot of skill talent and has the ability to score on any given play. The biggest matchup to watch is Loreauville’s dynamic quarterback against a talented Amite secondary.

Game Preview: The Capitol Lions are having an incredible postseason run under head coach Dorsett Buckels defeating DeQuincy and Lakeside in high scoring affairs. Despite giving up over 30 points in both matchups, the Lions’ offense has been explosive due mainly in part of the quarterback-wide receiver connection of Colby Tucker and electric sophomore wide receiver Jacoby Bellazar. The Lions have what it takes offensively to play in high shootout games, but the question is if the defense can contain the Kentwood Kangaroos, who have moved up from Class 1A to Class 2A, and have not missed much of a beat. Despite losing players like Trey Palmer (LSU), Edward Magee (Southeastern), and others, the Kangaroos, under head coach Jonathan Foster, keep reloading with great talent including dynamic skill athletes Tulane commit Cornelius Dyson and Radarrian Robbins. Defensively, the unit has given up only eight points in its last two games, and it is being led by tackling machine Bry’ce Cooper at linebacker.

Game Preview: The Many Tigers survived a scare in the last round prevailing over the East Feliciana Tigers by a final score of 24-20. The Tigers would have a bigger challenge ahead playing the Pine Raiders. The Tigers, led by head coach Jess Curtis, have played a tough non-district schedule early in the season, and have actually lost three non-district games before the season. However, the Tigers have been hot winning nine straight games thanks to the power running game of Terrence Williams and Shamorian Wiseman, who are both 220 pound running backs. The Tigers also dress close to 100 players, which makes them one of the deepest teams in Class 2A. Physically, the Raiders have a big challenge ahead of them, but the team has shown that it could compete with some of the state’s best by defeating the Kentwood Kangaroos earlier this season.

Win-Loss Records For Class 2A Picks (At Conclusion of Second Round):